How to Summon Internet Demons

Many people have begun to believe that demons have all but vanished from this world. This is not true, as the darkest of all spectres have just chosen new breeding grounds: the Internet. There are some who are foolish enough to attempt to summon these nefarious forces. It is our solemn duty, as championship surfers of the internet, to keep even the ones who summon these demons safe. Below is a list of the more notable internet demons, illustrations of their possible appearance, as well as their chosen symbols. Instructions on how to summon them are listed below the short description of their history and favorite colors. Please forgive the quality of these pictures and descriptions, they are from a time long forgotten in the lands of Internetia.

Kawaiizon: This is the Internet demon of obsession. She is said to be a “Grand Super Daimyo OK”, giving her command over 606 legions of the damned. The number of her army is often used as a symbol of power amongst her followers, shown in her heathen language as “^o^” and sometimes “^_______^”. She appears in bright purples and greens, often with speed lines and flowers petals while using an echo effect on her voice. This is before the theme music plays, which always sounds like a very badly translated karaoke tune.

Her followers show their worship by adorning their walls with cheap scrolls depicting shows they barely watch. The more devout of her followers resort to ornamental katana swords and entire wall racks full of unreadable Japanese magazines. You can easily spot a higher ranked follower by their inability to read them. Other common symbols of her blight include the pronouncement in public of such words as “kawaii” and following everyone’s name with “san”.

After the sacred words are spoken, Kawaiizon will appear and quiz you on your knowledge of animators and voice talent. Even when the questions are correctly answered she is an unruly demon. To keep her from morphing into a lion with the ability to shoot lightning bolts, she must be fed pocky every three minutes. Once summoned she can be used to point out sites to download Japanese OVAs and can navigate you to the nearest datable person of a relatively Asian heritage. Her curse is an uncontrollable desire to dress up as an anime character and converge at a place of her choosing, as well as ruining all of your bootleg anime copies. 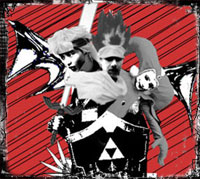 Unterlapsche: Formerly known as Waschesus, most likely originated from the ASCII demon Lollilmas. He is a demon of errors, notorious in the human realm for he is the one who steals your images from your screen as you browse the internet, replacing them with little white boxes bearing his mark, a red “x”. He takes great pride in increasing your speaker volume just before you go to a webpage that contains material you don’t want others to hear. His joys increase even more if you are at work, your shirt is off, and a supermodel happens to enter the office who is starting a campaign against people who prefer (very vocally) to be hit with wiffle ball bats.

Contained within the Book of ARPA, a story describes the deception of a young man at the hands of Unterlapsche: “The young had curledth up in his chair, prone before a shining screen. His fingers wind, his mind distracted by another window displaying the genitals of a woman whose region could cleft melons in twain. And Lo! The young foundeth that he had written to his mother such foul words as “mexijew” and “hit her in thy private landscape.” And he was for shamed, knowing he had just been bested by the demon Unterlapsche.”

A Grand Braon of Internet Hell, he is the force that governs your hand to make the most awful of typos. This includes crafting a sentence that talks about your love of cars, yet somehow comes out proclaiming your love of rainbows and how you own every Culture Club album. Even when it’s not true. He is in charge of lots of my butt. I mean demons. Scripture says that his army could be anywhere from 400 to I’m stupid. I didn’t mean to write that. Oh, I give up. 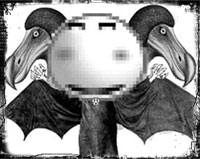 Extolend: Beware the golden cow of madness, Extolend: the Internet demon of insanity. Creator of Conspiracy Theory webs, this demon is potent and only should be handled by the most skilled or the most neurotic. His domain is marked with rotating gifs and flashing text. He grants the ability to string together any number of unrelated elements into a deliberate effort to kill everyone on the planet. His very breath can bring someone to imagine a piece of debris in their water is a planted mind control device. His eyes are like lasers, but I found that on a website so I don’t know if it’s true or not. My fillings are telling me otherwise. 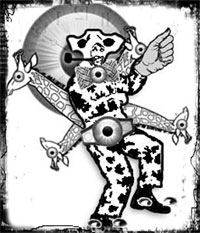 Gostais: A demon of advertising, she is the one that whispers into the ears of ad companies, “include sounds into the ads”. The appearance of car commercials that show no cars may have something to do with her. This demon can only be summoned after taking ten pills of Viagra, getting a mortgage on your home, and increasing your bust. Her powers lay in deception, allowing anyone you desire to believe they can get an iPod for free if they click your banner 300 times.

The Book of Compuserve describes the hideous effect Gostais had on the people of old: “As pestilence and homosexuality began to blanket the land, a more silent evil appearth that could not be smote so easily. Blacksmiths and cobblers began to hang animated signs above their households as a dark taint filledeth the townage. These signs ranged from simple text that flashed, but grew in foulness to offering free horseshoes if thou could hit Napoleon in his face with thy blue boxing gloves. Older, less advanced merchants could not overthrow the compelling signage that could not only offer free subscriptions to Newsweek but included sound clips of mainstream rock that most villagers found mediocre but pleasant to thine ears. The Lord took justice into his own hands, and hurled great bolts of lightning and preventive measures to smite thy flashing typography and jovial muzak jingles.” 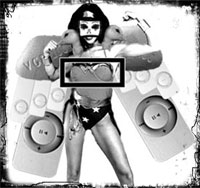 Segichne: A demon of misplaced humor, he is the demon that compels one to save all of the funny pictures one finds upon the internet. Not surprisingly, he is also the demon that compels you to show all of these pictures to your friends in rapid succession. Summoning him is an exhaustive chore, requiring one to read the top 100 jokes from barreloflaughs.lol, as well as perform the majority of one of these three movies: Monty Python and the Holy Grail, The Family Guy movie, or Hackers. The process by which you flog the funny aspects from these movies is so rigorous that it cannot be described here. 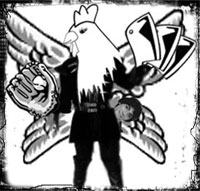 Sortort: He is the demon of nasty internet behaviors. Under his tutelage, the Pornathium theory was crafted. The theory is as follows: The amount of time it takes for one person to look at porn equals the number of Maxim issues in their room divided by the amount of time alone. He is also the spirit that commands the weak willed to immediately show their brethren the most foul imagery on the internet, especially if the person is first using it. To summon him you must do unspeakable things. I don’t even want to think about it. I need to go get a glass of water. He can be used to grant invulnerability to the horrors of the internet. He is the patron of travelers, for some reason. 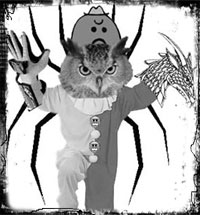 Turburratos: Formerly known as Emotxon, he is the demon of overdrawn emotion. If someone insults your attempt at a Shakespearean sonnet describing how much you like a girl in your class, Turburratos whispers threats you can leave on their journal. He is there upon your shoulder, egging your fingers on to respond with a drawing of you, complete with black wings, driving a sword into their very heart. With his guidance any picture that displays a member of the opposite sex will become attractive. You will be driven to desire them despite how wide their hips are, how big the gap in their teeth is, or how large their nose picture you see on the screen will be crafted by Turburratos himself to make you want to meet them. His touch can make your words sound sweet and deep even when you are describing how you ran out of mascara. Signs of his followers include a penchant for beard growth, skirt wearing (both genders), unnaturally black hair, and attraction to the letter “x” in any of their various online names.

The influence of Turburratos is so strong that his followers must listen to music every twenty four hours or they will go into an emotional rage that could possibly shake the very internet itself. Or just the forums they frequent. The most affected by the stink of Turburratos do not even notice the very slight differences between the bands they listen to, only being attracted to their cunning and creative ways in which they rhyme “bleeding” or “heart”. When summoning this demon, be aware of the variety of tricks he employs. He may appear as a tall and lanky white male, a medium sized young man with a Mohawk, or a short Asian girl. Be sure to compliment his hair and clothing, no matter what forms he chooses. He will quiz you on bands that you, nor anyone else, have heard of. Offerings of vinyl pants and spiked bracelets are preferable, but mixed tapes will more likely guarantee good results. 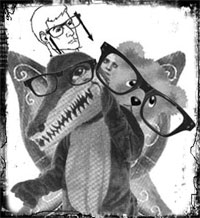 Gegaw and the Salami Swamis

Having a little extra time to myself, I formed a new band. Check out some of our lyrics here.