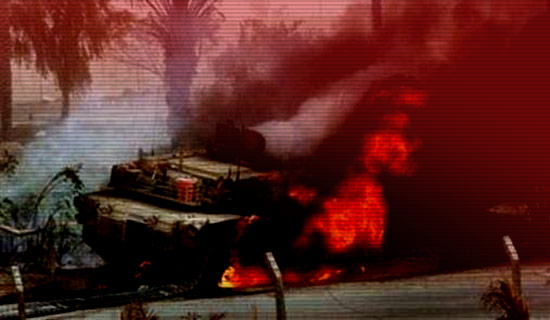 The tanks have been destroyed or immobilized. The desperate wave attacks of our auxiliaries have exhausted themselves in our push through the tangling suburban cul-de-sacs. I try to stay near Colonel Proctor as we push ahead on foot, past the over turned barbecues, slime-filled pools, and fire-gutted tract housing. By early afternoon, the offensive has fragmented into a hundred small, pitched battles.

It's been over an hour since I've seen Colonel Proctor.

I shelter against the bombed-out husk of a Burger Dan. The rotund statue that was the chain's mascot is burned and listing. Scraps of painted fiberglass hang like hanks of rotting flesh over his mesh skeleton.

The parking lot is strewn with debris. A pair of denim clad legs has been deposited by some horrific blast in the center of the nearest handicapped parking space. This is the final resting place of roughly half of a zone warden.

It stinks of smoke and burning insulation. I don't know the names of any of the soldiers with me. Our objective is unclear. The specific direction of the enemy is open for debate, although I am relatively certain the Unfolder sympathizers are the ones shooting at us from the opposite side of the Burger Dan.

Our radio is useless due to "atmospherics" and the sergeant in command of our under strength squad is gut-shot and screaming. Smoke climbs from burning outlet stores and strip malls.

Abruptly, the enemy guns near us fall silent. We wait a minute, then two. One of the younger soldiers uses a pocket mirror to peer over the toppled masonry we are using for cover.

"I don't see nothing," he says. "I think we should try flankin' around and-"

The Unfolder is in among us without warning. It is in the shape of a man, but it is unraveling and unspooling. Keen tendrils lash out from its body. A man falls in half, bisected from crown to groin. The young soldier with the mirror loses both arms. He screams. The Unfolder takes his head.

One man runs and is brought down by gunfire. The skinny man next to me turns and fires into the Unfolder on full auto. Pieces of its body burst into the air like confetti as it is struck by the bullets. Seemingly unconcerned, its sectioned face leers at us and it enfolds the skinny soldier in its swirling ribbons. He shrieks in agony as the Unfolder flays his body, shaving off his skin, his muscle, and dashing his bones into a hundred clattering dice.

I am the only man left facing the Unfolder. It whirls, a spiraling tornado of unearthly tissue, and I can hear its laughter as I confront my death. It is all around me, razor ribbons poised to mince my flesh.

The grenade's spring loaded metal handle pings against my helmet.

I am in a fog. A familiar tone invades my senses. The metal ring around my finger belongs with a grenade that is now in a very different time and place.

I am not alone in the fog. The Hierophant is beside me, his fleshy tendrils writhing impatiently. He is looking down. Looking at me, on the ground. My own face, eyes wide with horror. I am remembering this happening for the first time. It is an odd sensation, to experience things twice simultaneously. To remember seeing myself as I see myself seeing myself.

"Who...," I recall the terrific struggle to get out the words.

There is no answer I can offer. To attempt to explain what is to come might alter events in terrible ways. Or would it not alter events at all? Was I brought here or-