Two men with three arms between them made their way across the ocean in a jumble of swollen, warped planks precariously held together with nails made entirely of rust. The man with two arms frowned at a treasure map balanced on the head of the other man, who rowed with a vaguely paddle-like roadsign. The faded lettering across its business end caught the captain's eye.

"This map confounds me, but according to that paddle o' yours we should hit Madrid in five miles. When we arrive, I want you to ask for directions, Sneedley. It ain't a captain's place to partake in such drollery."

The first mate surveyed the horizon, then spat.

"Don't see no Madrid, cap'n, just more water. 'Sides, we bought this sign from that wandering merchant that sold nothin' but roadsigns that read 'Madrid - 5 Miles'." His gruff tone took a turn for the wistful. "Back when times was better."

The captain raised a muscled hand to rub his equally muscled - yet infinitely more impressive - forehead.

"I knew we shouldn't have traded our navigator and schooner for this rowboat."

"With all due respect, cap'n, I told you it was a bad trade. As did the man who traded with us." Sneedley paused. "Actually, I believe he called it a terrible trade."

"Aye, but he said it with such enthusiasm that I couldn't help but go through with it."

The dull roar of jeering and expletives coming from the deck of the massive cargo vessel directly behind them grew louder, apparently in response to Sneedley's momentary break from paddling. The captain whirled around, braving descriptions of body parts which he had never heard of and prayed did not exist. He expressed his desire to hold a captain-to-captain chat by flawlessly executing the universal signal - flailing his arms wildly and cursing under his breath.

A tall, skinny man with a severely broken nose pushed his way to the larger vessel's masthead, quieting his crew with a slight gesture, pulling the trigger on his handgun.

"About time you paid attention to us!" The cargo ship's captain leaned one foot on the ship's railing, stuck his hands on his hips, then thought better of it and slung his jacket over one shoulder, holding his free arm before him as though he was checking a watch. "The name's Captain Paran, and for the last two days you've been impeding the movement of an official vessel of the French government."

"And I'm Captain Kesselrun. Tell me, why haven't you gone around us?"

The question agitated Paran so much that he changed poses once again, producing a chair which he spun around backwards before taking a seat. His chin rested on the chair's back, his long arms nearly dangling all the way to the ground. A crewman carefully adjusted the captain's tricorne until its tilt was at the intersection between casual authority and indifferent coolness.

"Because," Paran drawled, "our fleet has established the most time-efficient trade routes possible. We never stray from those routes, lest we lose even a fraction of a second."

"Makes sense, that does." Kesselrun held up the treasure map. "Look, we're lost. We've only got this map, and neither one of us knows which way t' hold the thing, much less get a bearing on where we are. Mind giving us a hand so we can clear out of your way?"

The crewman that adjusted Paran's hat now came forward with a spyglass, which he pressed against the captain's right eye.

"No, I squinted that one. Put it against the other eye. There you go."

Paran studied the scene before him in silence. 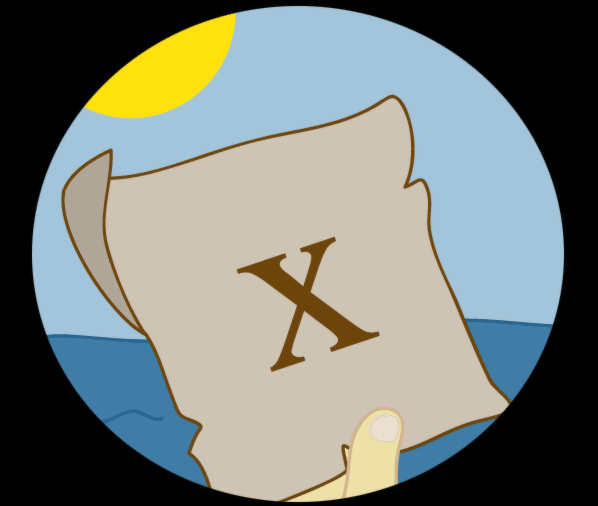 "It appears," Paran finally said, "that your map is more problematic than I had anticipated."

Kesselrun studied the parchment once more, furrowing his muscled brow.

Captain Paran rose from his chair, then leaned his back against a large deckhand, sprawling his legs before him. After hooking one ankle over the other, he crossed his arms.

"Your map has a letter of some sort on it," Paran explained, "and I cannot read."