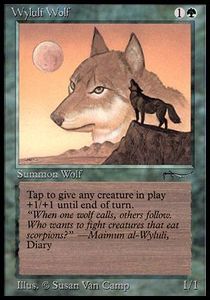 But instead she heard a voice call out: "Wolfen Spirit Shield!" It was Silkentail, lifting his head weakly and bringing forth the last of his wolfen magick. The air in front of her shimmered as the spirits of the wolf gods wrapped their protective aura around her, and the flaming Aryan skull exploded harmlessly. This gave Misha the time she needed. She locked onto the black-cloaked Nazi with her missile bank.

"Let's see you heil Hitler from hell," she hissed triumphantly, and let loose her arsenal of missiles upon the Nazi mage. In moments, the man was transformed into a smoking crater. Meanwhile the rest of the soldiers had already been dealt with by the wolf army. A few of the wolves started chewing off the chains that held the prisoners.

Misha dismounted from her warsuit and ran happily to Silkentail. But the wolf ranger who had taught her so much about the world had emptied himself of his life energy when he cast the spell that saved her. He was dead, and she cradled him in her lap, weeping over his furry body.

"I swear," she said, "I swear I won't stop until the whole world is safe again for Jews and wolves. I swear to you, Silkentail."

She stood and faced the newly freed prisoners.

"My wolf army and I are retaking Europe from these bastards. Those who wish to fight may join us. Those who do not are free to go." She leapt into her warsuit and stood it to its full height. These last words she spoke through the warsuit's voice, booming out over the valley.

Chapter 6: The Tide Turns into a New Day

The concentration camp was in ruins, and all the prisoners were dancing victory dances and cheering their wolf liberators. Misha rode on the back of the Wolf King with her warsuit following automatically. She saw a little girl sitting on the ground, crying, and signaled the Wolf King to stop.

"Why are you crying, little girl?" she asked. The girl looked up at her and sniffed.

"My entire family was killed," the girl said. "There is only me." Misha dismounted from the wolf and laid her arm on the girl's shoulder.

"Come with us," she said. "The wolves will adopt you."

"Will..." said the girl, "will they really?" In answer, Misha picked her up and placed her on the Wolf King's back, then hopped up in front of her. The last of the Nazi guards were being killed by the wolves. The stronger prisoners were picking wolves to ride, and joining the liberating army. Cheers and cries of triumph came from all sides.

Looking up, Misha thought she saw Silkentail's face in the sky, just for a moment.

"What is it?" asked the Wolf King. Misha smiled.

"Nothing. It was...it was just my imagination," she said. "Come on, our work's not finished yet."

The young Jewish orphan from Warsaw pulled the long knife from her belt and held it aloft as the Wolf King charged forward. Thousands of Jews riding wolves followed her. Next stop: Berlin. 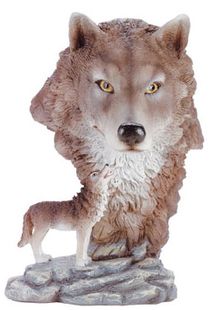