How to Kill Every Person Every Time on Every Map

If you somehow weren't able to skip a map and find yourself forced to actually play the game, your success lies in familiarity with each area. Practice each map frequently. Spend time getting to know it better. Buy it flowers. Take it out to dinner. Try to have sex with it. The map may lie and claim it's on the pill, but it's simply trying to trap you into a relationship. Some day it shall give birth and these babies will be named "DLC." Don't worry if you lack insurance; the delivery fees can be paid in Microsoft points. 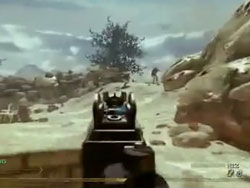 Look over the edge! Don't move! Ever!Anyway, ignore whatever the hell I just wrote and instead follow these simple instructions to dominate every map within seconds.

Afghan: following the Modern Warfare 2 Bunker Rule, you should crouch somewhere in this map's bunker area, that underground storage cave thing. If you are shot and killed, hide on the opposite side; nobody will ever see it coming! It's the old switcharoo!

Derail: quit the game and join another lobby, one which doesn't have a snow-themed level coming up.

Estate: plant claymores in the bathroom and go prone at the top of the stairs. This will protect you from invaders entering through either the front of the house or the toilet.

Favela: barber shops are traditionally known for hair cuts... not snipers! Nobody will ever look for you here, and if somebody stumbles upon your clever hideout, try to trick them by offering a free haircut. Then shoot them. For authenticity, remember to dip your bullets in that creepy blue Kool-Aid crap first.

High Rise: crouch amongst the boxes and papers in the office area, attempting to shoot anybody looking for a spare pencil. Nobody will ever be able to tell you're there; they'll simply assume they were murdered by an armed filing cabinet.

Invasion: snipe from the top floor of the American embassy, preferably near the US flag. Killing people near a flag proves your loyalty and will prevent your name from ever appearing on the dreaded Do Not Fly list. If you eventually shoot enough people, NASCAR will add your clan tag to their pace car.

Karachi: pretend you're the bus driver and hide behind the wheel. If anybody gets on, charge them bus fare. Make the terrorists sit in the back and give up their seats to any US soldiers.

Quarry: look for a warehouse. Run inside and look for a catwalk. Lay down on it and try to snipe people distracted by the horrible map design. Just remember: DON'T EVER MOVE. 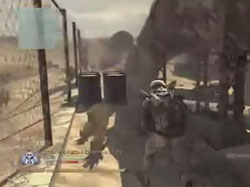 The fun and joy of running! And then dying!

Rundown: two bridges connect either side of the map, so point your machine gun at one and start shooting. Eventually the bridge will collapse and anybody who attempts to cross it will fall into the stream below, and one of those candiru dick fish will swim into their penis. Then you will receive 125 achievement points and the coveted "Catfish in Urethra" callsign.

Rust: sprint like an idiot with the rest of the players counter-clockwise around the outside of this map until everybody creates a tornado destroying every living creature logged in. If you're not a personal fan of movement, go prone in that large horizontal pipe leaning over the edge of the map. Nobody would ever expect to be injured by a comically large pipe! Except maybe Mario I guess.

Scrapyard: locate the office area that has a bunch of computers and office crap on the second floor. Hide there and throw grenades at anybody stupid enough to approach the stairs. Then use one of the computers to IM them and call them a fag.

Skid Row: there are two perfect places on this map, both near the same area. If you're feeling adventurous, hide in the haunted alien laundromat and enjoy the spooky green lighting which comes from nowhere and makes it seem like you were shoved into the Hulk's anus. If you recently had eye surgery, walk a floor above and grab one of the mounted gatling guns and practice not killing anybody until a level one-ranked person joins and wanders into your bullets.

Terminal: the control tower's roof contains a large tank of fuel. What could possibly be more unexpected than a man crouching there with a sniper rifle? If somebody looks in your direction, shout "I'M FUEL" until they are convinced you're a non-threat.

Underpass: utilize your camouflage by crouching in the tall grass and admiring an underfunded department of transportation.

Wasteland: beeline for the bunker. Nobody ever looks in there! They're all too busy hanging out by the cemetery, smoking Cloves and listening to the Twilight soundtrack.

Congratulations! You are now a lean, mean, video game killing machine! If you know of any other top secret tips and tricks, drop me a line and hopefully I'll include them in a future article.