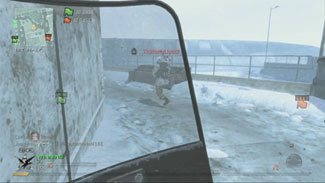 You rotten cheater! The riot shield is like the BFG!

Upon entering a game, sprint to the nearest corner. If you are unfamiliar with corners, they are areas where two walls intersect each other, and are usually decorated with large piles of corpses. Upon reaching the corner, sit down and don't move for the next several hours. In a perfect world, every single player would be assigned their own special corner, and the game would be eight minutes of people not moving.

If you are unable to locate any corners, sprint towards the center of the map and hide there. Ideally you will enter some sort of underground bunker with several entryways. Choose one and randomly shoot in that direction until either you kill somebody or somebody uses complex mathematical formulas to locate your position.

Upon murdering several enemies, you will receive notice that a "care package" is available. Care packages are gifts from Jesus Christ, rewarding you for punishing those who were not baptized (Infinity Ward is famous for failing to baptize most of their video game characters). When you toss out your smoke grenade to signal for the drop, be sure to stand directly underneath the impending landing spot. Catching care packages with your face eventually unlocks a the 100-point "Ron Perlman" achievement.

Sometimes the game will seem to jump or skip around, making it impossible for you to use your shotgun to snipe a player on the opposite side of the map. Turn on your headset and scream "LAG!" or "STUPID SERVER!" repeatedly. These handy statements inform all other players that you are at a distinct disadvantage, so if they kill you it technically shouldn't count because you are the one single individual suffering from slow gameplay. Infinity Ward employees actively monitor the audio of each and every multiplayer game, so keep shouting "THIS SUCKS" until one of them flips the switch labeled "MAKE SERVER MORE GOOD." 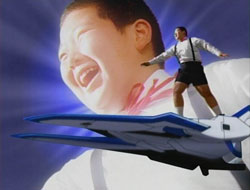 This child plays Modern Warfare 2... and he harbors doubts regarding your heterosexuality!

The Xbox Live headset is an integral tool for success. In addition to instantly communicating with fellow teammates, a skilled gamer uses the headset to accomplish invaluable things like:

Talk to grandpa. What is he doing in your room? Can't he see you're playing a very important video game? Express your disdain with that rotten old asshole by sharing your personal conversation with him over Xbox Live. This provides a useful service for fellow gamers, all of whom were undoubtedly asking themselves, "I wonder what [DOPE] 420MaStA-Z's grandfather is up to right now?"

Discuss your weekend plans with a friend in the game. Are you going to see a movie this Saturday? Where will you be eating? Does your car need an oil change? Questions like these add a real human element to the game and makes it feel like you're really on a battlefield, trying to defeat an army of frat boys who shoot at you while radioing in the amount of times they puked during the football game last Friday.

Cough nonstop. Gamers love to hear people choke and gag, so try to develop an advanced case of pneumonia before logging in. Don't bother hitting the headset's mute button; pressing that is a sign of weakness, like sitting down to pee or yielding for pedestrians.

Draw public attention to individuals who perform specific actions consistent with that of homosexuals. Did somebody just shoot you? What a fag! Did somebody use a weapon you don't prefer? What a homo! Everybody playing Modern Warfare 2 cheats and plays it incorrectly except you, and if that's not the definition of being "gay" then I sure don't know what is.

Consequently, you should absolutely never use your headset to talk about certain things, such as: