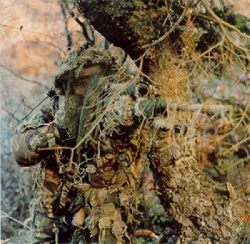 I am just a part-time sniper, but I am a full-time camouflage expert.Arrived at objective GATEKEEPER. Objective secured by hostile forces, numbers and composition unknown. Posted notice claimed 0800 open time on the objective. Used time to collect local flora for my Ghillie suit. These included spruce bushes, yellow and orange leaves, and McDonald's Breakfast Bagel wrappers.

Neutral civilians began arriving and piling up on the objective. I moved forward in concealment and set up claymores and fields of fire to engage any threats with maximum firepower. Objective opened without incident. I flagged my claymores for EOD disposal with an IR transponder and moved on the objective.

Used infiltration and local vernacular to insert to the front of the line. Was addressed by an obese gentleman as, "Hey, you fucking faggot," and was instructed to "get to the back of the fucking line." Considered a take down, instead opted to deploy the bird. Double bird deployed for maximum target devastation. 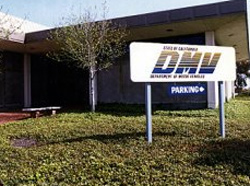 I took a day off legitimate commando ops to come here.Immediately engaged hostile at GATEKEEPER. Hostile named Doris Lamply. Adult African-American female. Attacked my position with forms, told to fill them out. Secured forms and popped smoke to cover withdrawal to writing nook.

Asked to leave building by uniformed hostile militia. I utilized a nerve pinch to subdue my attacker. He should recover full use of his arm within two or three months.

Finished filling out form and waited in Doris Lamply's line for nearly 20 minutes. Reached Doris Lamply and was told to see Helen Mender in the green line for renewals. 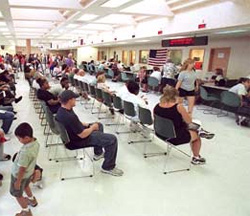 Look at you SHEEPLE. Wake UP!Established contact with Helen Mender, Caucasian female the size of a stout pony. Handed over requested forms and necessary proof of identification. Spent three minutes explaining that my middle initial was not the letter "O" and doesn't stand for a word. It's the number 0 or "zero."

Helen Mender did not seem satisfied by this application nor by my name, but she approved it for reasons I can only assume have to do with my persuasive ability.

At 0840, only a few minutes after my arrival in Helen's line, I was given the heartening news that I had passed the necessary requirements and would be issued a temporary license for driving.

"I was fixin' to mark you as invalid cuz you wrote 'special ops' as your job description and 'American people' as your employer. Then I realized you weren't makin' that nonsense up and I wanted you out of my department of motor vehicles. So I approved your renewal."

"Have a very nice day," she added.

My day was not to be very nice. My license renewal was to be mailed to me at my office.

Unfortunately, I could not divulge my office's grid coordinates to the enemy. I would not be receiving my license at the fake address I gave to Helen Mender. My mission was a failure.

Realizing the LZ was too hot for a chopper, I hit my emergency transponder and moved to an open area to inflate my Skyhook balloon and await evacuation.