Town Criers Are All the Rage!

You may not be aware of this, but the pastime of being a Town Cryer is sweeping the nation by storm. Last weekend in Philadelphia, partly as a celebration of our nation's independence and partly as a celebration of our nation's history of producing awful loudmouthed jackasses, a Town Crier contest was held. Town Criers from across North America were invited to attend and prove who could be the most overbearingly annoying. This year the contest sported an increased attendance from the younger generations, proving that being a Town Crier is fast becoming the next eXtreme sport like snow boarding, face skating, or bungee boating.

The competition centered around three trials, or heats if you want to make being a Town Crier sound semi-legitimate, that took place throughout the eventful day. The first cry was a greeting the individual criers devised of no more than 125 words. The second call was a response to the Declaration of Independence. The third and important final call was a thank you call, obviously to show that the crier could be gracious despite people in his neighborhood hurling blunt objects at his face every time he opened his gaping biscuit portal. Judges rated the criers on sustained volume, manners, the content of their cries, and the usage of the all important attention getting devices like bells and giant hammers that the crier smashed into metal garbage cans.

Never one to pass up the chance to get in on the ground floor of the next big thing in adventure sports, I have been brainstorming ways for Something Awful to get the coveted first place at next year's Town Crierpallooza. I want the SA Crier team to smash through the ranks of the competition and make us all a lot of winnings.

I've put together a team of the four hottest sensations on the minor league pro-Crier circuit and I've been drilling them for three days on how to "up their game". I think by the time next year's competition rolls around, the SA team will be a shoe-in. Let's take a look at the members of this super team! 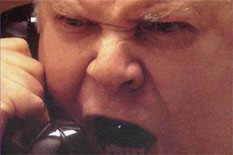 Team History: The newest member of the team, we drafted Mad Dog when we ran into him at a Kinko's in Michigan. Actually we didn't meet him on that fateful day, rather we heard his screaming voice emerging from the other side of a telephone at the Kinko's and demanded to know who was on the phone. One flight to Schenectady later and we had signed Mad Dog to our team. He is considered to be the most "extreme" member of our squad and in press releases we will emphasize that he does everything "2 the max".

Strengths: Mad Dog has experience yelling on the phone. At his office at Manholdt Office Supply he is the supervisor of the shipping and receiving department and he will not take "no" for an answer. He spends roughly six hours per day screaming into a telephone at either underlings or product suppliers.

Weaknesses: While we expect Mad Dog to score big in the volume department, his greeting entitled "WHERE THE FUCK ARE THE PINK POST-ITS YOU MORONIC SHITHEEL?!!? I ORDERED TWO PALLETS TO BE DELIVERED TODAY!!" is not expected to do well in either the content or the manners categories of judging. He also is known to have a violent temper and is rumored to have once thrown a temp through a glass display case containing Mr. Manholdt's bowling trophies. 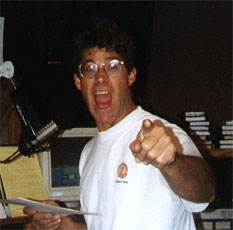 Steve "Bongo" CaseyDay Job: Morning Zoo DJ at 102.5 WLAF in Boston and one half of the "Bongo and Gator Morning Cruise Patrol"

Team History: One of our loyal readers in Boston pointed us in the direction of Bongo and it was love at first listen. His skilled use of the explosion sound on the soundboard when a phone call went awry and random insertion of bongo beats into lackluster comedy bits had us calling him as fast as we could. After a prolonged conversation that involved a series of slide-whistle sound effects and a joke about Monica Lewinsky he was signed to Team Something Awful.

Strengths: The bongos will be a unique and attention getting replacement for the tired town crier tradition of using a large bell. We also have our support team working on a portable version of the 102.5 soundboard that Bongo can sling around his neck and use to interject hilarious sound effects into his crier routine.

Weaknesses: The majority of Bongo's content will likely consist of fart jokes and the occasional off-color reference to a piece of fruit resembling a sex organ. He may take the time to script a hastily produced sketch poking fun at the coach of a Boston-area sports team, but again I expect the response from the judges to be lackluster. 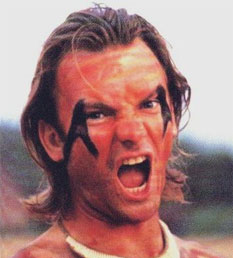 Team History: When we saw Sting on the MTV Awards doing "I'll Be Missing You" with Sean "P-Diddy" (then "Puff Daddy") Combs, I knew he would do anything for a few bucks and the opportunity to expand his fanbase. By convincing him that there is a huge untapped market in the Town Crier scene, we managed to get Sting to agree to a single performance at next year's festival.

Strengths: With a still-powerful singing voice, years of lyric writing, a guitar in place of a bell, and legions of fans, we expect Sting to really blow away the competition.

Weaknesses: Sting may attempt to license out his songs to other criers at the competition for substantial fees, taking away the edge he has in content. Lately he has also had a propensity for unnecessarily pretentious showmanship, and we are concerned that he may arrive in Philadelphia dressed as Jesus with a cock-ring made of thorns. In the event this or something similar happens he will be hurried back onto his tour bus before debuting "Hear Ye! Hear Ye! I'm Losing My Wings!". 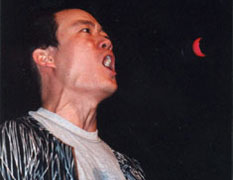 Team History: The Japanese are not just known for their ability and making horrible sex computer games, they also have a long history of obsessively winning offbeat contests like hotdog eating, screaming, vole punching, and horse grooming. Tetsuo came to the Something Awful team hot off a winning streak in New York and Los Angeles, bringing home the gold for being "the loudest man on earth" at both the regional and national levels. When he heard about the Town Crier, Happy Mouth was quick to assert that no man on earth could train with more insane dedication for this contest. Since he joined the team Happy Mouth has spent over 23 hours a day in 100lbs of crier gear, marching back and forth in downtown Seattle honing his skills.

Strengths: Happy Mouth takes the more traditional approach to being a Town Crier, with period garb, the standard "giant fucking bell", and time-tested content that will be sure to go over well with the judges. His incredible volume will also rattle fillings in jaws as far away as New Mexico when he begins his routine at next year's Cryathon.

Weaknesses: While Happy Mouth has some surefire methods to please the judges, he has spent so much of his life competing in wacky contests that he may become confused and revert to his training for a previous competition. Imagine our consternation when the whistle for his routine blows and instead of doing his bell-ring and greet, Happy Mouth proceeds to devour all six judges in under one minute.

I think with some more training these four up-and-comers will turn the Town Crier competition on its ear and prove that 2003's competition "Ain't Your Mama's Town Crier Competition".

Our resident computer expert and grammatical genius Jeff K., who has recently been on some kind of hiatus, has returned with a big bang. Well, not the big bang that created the universe, but a fairly big bang. Not in comparison, of course. Regardless, Jeff K. apparently noticed the cash crop of RPGs being released these days, so he decided to create one of his very own. Weighing in at 1.1 megs, we here at the Something Awful community would like to present you the most revolutionary step in the long lifespan of role-playing games, "TEH CASTAL ADVENTUARE!!!" 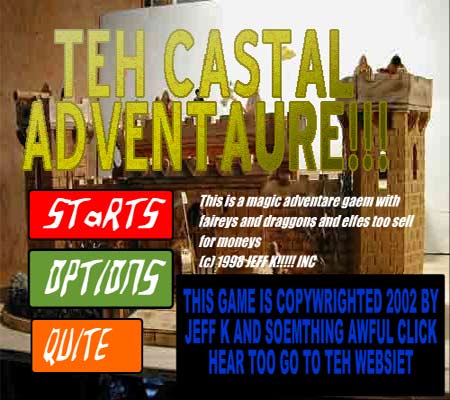 What the hell are you waiting for? Head on over and get cracking on this deep, complex, mysterious RPG that will have you addicted for weeks! If you read it on the Internet, it must be true!