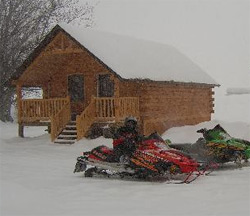 It was late November and snowing heavily, the first indication that I was making a gigantic mistake.

The second indication came when I turned off onto the unplowed gravel road leading back to the cabin and my car became stuck almost immediately. A half-bag of road salt and three dig-outs later, I had developed a technique that involved driving as fast as possible, wildly out of control, and hoping to slide and spin my way down the country road.

I arrived at the cabin and dug a path from my car to the front door and from the front door to the outhouse. I peered down the ominous hole and could see a glistening plug of frozen waste.

The décor inside the cabin was utilitarian. There were a few black and white lithographs of hunters and hunting framed and crudely hung on the walls. I suppose they were there to get Terry and his family totally pumped up to go shoot the shit out of something.

There was also a decorative sword hanging on the wall and beneath it a small plaque.

"The Sword of Kurgan," I read from the plaque. "Wielded by Clancy Brown in The Highlander."

It was a comforting thing to have around in the event of an attack by wild MacLeods.

I stocked the cabin with some canned foods and bottled water. There was a propane stove with a single burner on which I would later cook culinary delights like "pan of beans" and "pan of black beans." My immediate meal plan saw me decorating the cabin with the bright foil wrappers of Nutrigrain bars, which are like really long fig Newtons with a few oats stuck to the outside to trick people into thinking they're healthy.

It snowed all day on the second day. On the third day at the cabin I began to wonder about all the snow. It was snowing so heavily I actually climbed on the cabin's sloped roof to be sure the chimney for the fireplace was clear. There were a few starter logs and just beyond the door a stack of what seemed like plenty of firewood.

It was day six when the firewood ran out and the snowy road was completely impassable. I considered my options. I could try to walk the three or four miles up the snow-covered road, I could kill myself, I could take off my clothes and join with the winter woodland animals, or I could tough it out.

I wanted to stay despite night time animal sounds that included what I am pretty sure was a woman's high-pitched scream and an octopus that climbed on the roof. My favorite was a deep grunting sound that would move in circles around the cabin some nights for more than an hour. I'm not sure what sort of animal made that sound, but I am certain its dietary source of protein was human bone marrow.

I decided to stay. I had plenty of provisions left and I had made just enough progress that I felt like I was accomplishing something. All I had to do was get some more firewood to stay warm and everything would be just fine.

A thorough search of the cabin turned up an oily wooden chest that contained a hand saw. I was surrounded by trees, so I figured getting enough firewood would not be too difficult. For my first victim I selected a gray-barked deciduous tree with a truck about as thick as my wrist. The saw blade bit into its hide easily enough and produced a sweet-smelling sawdust that piled up in the snow at the base of the tree.

I sawed about half of the way through the trunk when I heard a sound like a guitar string breaking. This was the sound of the one and only saw blade I had snapping. I trudged back to the cabin and tore the place apart looking for a replacement saw blade. I spent an hour trying to repair the saw blade and another twenty minutes trying to improvise a saw out of the three pieces of the blade.

After two hours of swearing and pounding all I had to show for my efforts were a few jagged cuts in my hand and a fingernail I bent back while trying to pry metal with my bare hands. I was just about ready to give it up when I decided to try one last thing.