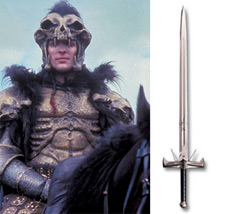 I took Kurgan's sword down from its mounting on the wall. This was more difficult than it sounds. Terry or his father had secured it directly to the wall by hammering two metal brackets around the pommel and the wide blade. I couldn't just slide the sword out because of the hand guard, so I had to use a hammer to pry the brackets out of the wall.

I was panting and sweaty by the time I wrestled the sword down from the wall. The blade was dull as a brick, but one of the items I found in a drawer next to the stove was a knife sharpening kit complete with cloth, whetstone, and some sort of cream.

Sharpening a decorative sword is not easy. By the time I was done the chrome was rubbed off in big patches and the edge of the blade looked serrated from all the dings. No amount of "polishing cream" was going to cover up the damage done. Still, it was a heavy sword and I felt pretty confident I could fell small trees with a few good chops.

I hefted the blade onto my shoulder and trudged back out into the snow. It was getting dark, but the tree I was sawing was on the edge of the woods and I could see the light oil lamp burning in the cabin's window. I reached my wounded tree and sunk my legs into the hip-deep snow to steady myself.

I held Kurgan's mighty blade to my shoulder like a baseball bat, with both hands on the textured pommel. The chrome on the blade caught the light of the setting sun and the sword seemed to be burning. Truly a mighty weapon for a mighty man to complete a mighty task. I took a few practice swings and then took careful aim at the trunk of the tree.

I twisted my waist to coil my energy like a spring and then with all of my might I swung Kurgan's sword at the trunk of the tree. I can't explain why, but at the last possible second I closed my eyes.

My hand reverberated from the force of the impact, but a funny thing happened. My torso twisted like an insane battle mech, the sword connected with the tree, and yet I continued to turn. It was as if the sword had struck the tree and then sliced right through the wood. The momentum of the swing was twisting me around completely.
I lost my balance and tumbled face-first into the snow.

My hand, still holding the pommel, disappeared into the deep powder and I lost my grip. I thrashed around, unable to find a footing. Sawdust and snow covered my face. With great effort I rolled myself onto my back and spit the sawdust out of my mouth.

I heard a distinct crunching sound of snow compressing beneath the face-rending talons of some terrible woodland creature. CRUNCH...pause...CRUNCH...pause...CRUNCH. A beast was approaching, no doubt drawn by my inept swordsmanship. Perhaps it was Kurgan, returned to reclaim his sword and take my head, growing his power in the process.

I sat up suddenly and shouted to warn off whatever beast was approaching. A startled owl looked at me with irritation and flapped its wings, lifting easily into the air and settling in a tree nearby.

"Who?" It called, refusing to complete its sentence. 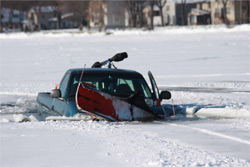 I looked over at the tree. The three-foot chrome and dent blade of the Sword of Kurgan was stuck into the wood, still vibrating. The handle had completely separated on impact and the sword's blade had stopped about a quarter of an inch into the wood.

I left the blade stuck in the tree and trudged back into the cabin in utter defeat. The last embers of the fire died early in the night and by morning the cabin was intolerably cold. In the end, I did kill that poor tree. I took the hammer outside and pounded the blade of Kurgan's sword until it cut deep into the wood. The tree came crashing down about the time my snot froze to my face.

The green wood did not burn well in the fireplace, but it provided enough heat to get me through the rest of the day and night. A plow truck appeared the following morning, freeing me from my isolation.

I wrote Terry a check made out for my best guess on the price of the sword. I left it on the cot. To keep it from blowing away I held it securely beneath a three-foot long steel paperweight that some ruffian beat senseless with a claw hammer.

I returned home, relieved to be able to finish my book in the familiar comforts of my office and content to be just a writer once again.