Welcome to the first installment of Video Game Article, the most aptly named article since Albert Einstein's wildly popular six-part guest feature in Scientific Journal Monthly entitled "I Can't See My Own Ass Without A Mirror".

In this new bi-weekly feature I'll be covering the latest industry news and rumors, reviewing games in the most concise format ever concocted, and generally continuing to disappoint my family with my career choice. Think of Video Game Article as Electronic Gaming Monthly without the months-long delay and Seanbaby's infinite supply of ways to say things suck while incorporating 80's pop culture. Or think of it as Gamespot without the frightening videos of disheveled men reviewing games while staring into the camera with barely concealed rapefaces. Or maybe think of it as IGN without the horrible grammar and numerous typos, and the sixteen page articles with one paragraph on each page followed by an insterstitial flash ad for potleafs or McDonald's. Don't even think of Gamespy. You have too much to live for, just don't do it.

If you'd like to send in some of your drawings of female video game characters with mustaches or are a developer or publisher who would like your game reviewed in an unfair manner, contact me at ctstalker@somethingawful.com 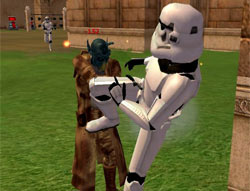 In Space, SOE Can't Hear You Complain
The development team behind Star Wars: Galaxies recently rolled out a complete overhaul of the mmorpg's combat mechanics in an attempt to fix the much maligned system that had previously been in place. Once they add some actual content to the game and fix the numerous flaws that have gone unaddressed for the past two years, Sony Online Entertainment hopes SW:G will be ready for a beta test this spring. My inside sources tell me that SOE is optimistic that the game might even be suitable for a retail launch by Christmas of 2006. Keep those fingers crossed!

Where Da 360s At?
Facing harsh criticism from gamers who have been unable to get their hands on Microsoft's next-gen console, a spokesman for the company has issued the following statement to the gaming press:

"Blatant lies are circulating about the Xbox 360's launch, and it's quite disturbing. People are saying we haven't been able to produce an adequate number of systems, that retail stores have no idea when to expect additional shipments, and that we are utterly incompetent when it comes to predicting supply and demand. This is simply not true. According to our calculations, we have already produced and shipped enough Xbox 360s for every man, woman, and shemale on Earth that wants to buy one. What's happening is the consumer is simply not looking hard enough. There are tons of systems out there, but they're probably just out of sight at the back of the shelf. Sometimes they also get pushed over behind other items on the shelves next to them, so it looks like there are no Xboxes but there are actually a bunch of them right behind that leopard skin steering wheel cover."

State Of Disbelief
DC Studios has announced that they're developing State Of Emergency 2, the sequel to the puzzlingly successful PS2 game. Once again you'll take to the streets to destroy other people's property and beat fellow human beings to death in order to show your displeasure with evil companies who dare to commit the unspeakable acts of selling and advertising products. Fight the power! Fight the logic! Fight the boredom that sets in after the first thirty minutes of playtime!

Murder Mystery
On Friday night Edward "Stryker" Wilbaum got home from a rough day at work and logged onto his favorite Unreal Tournament 2004 server, Captain Licknutz' T1 Party. He expected a friendly game. What he got was cold-blooded murder.

As Stryker's avatar spawned in the game, it was struck from behind by what preliminary reports claim to have been a rocket. His character was blown to bits instantly before he could even get out his customary friendly greeting of "hay doods". Stryker never saw his assailant, who is still on the loose and presumably armed. Until officials can apprehend this madman, they caution UT2K4 players on all servers to stay inside secure buildings and travel in groups of two or more if they absolutely must wander outside.

If you have any details about the events of December 2nd or know anyone who was on Captain Licknutz' T1 Party at approximately 10 to 10:15pm, please contact the authorities. We'll keep you posted as the story develops.

City Of Villains
This streamlined mmorpg built upon the solid foundation of fun combat and a robust character creation system asks you to pay $15 a month for the opportunity to be a jerk and fight with thousands of other people, but if you have internet access chances are you're already doing that for free. 8/10

Project Gotham Racing 3
There's a lot more driving involved than I had been led to believe and practically no Batman, but I enjoyed the rest of the game. 8.5/10

Crime Life: Gang Wars
Imagine a 3D beat-em-up in the vein of Final Fight set in a world populated with generic thugged-out morons that you actually want to beat up, only with a combat system that you want to beat up even more. 2/10

Prince Of Persia: The Two Thrones
The platforming parts were decent enough and the horrible music from the last game is thankfully gone (though it seems to have been replaced with a bevy of glitches and bugs), but even though four years have passed I thought it was in very poor taste to have two arab-piloted elephants crash into the titular thrones. 7.5/10

Mario & Luigi: Partners In Time
Mario and Luigi team up with the baby versions of themselves to fight (surprise!) Koopa, and we learn that time travelers who come into contact with their past selves don't create a cataclysmic explosion of time and space that ends the universe as we know it, but in fact create a pretty entertaining and funny game. 8.5/10

Infected
If you've been wishing someone would combine the highly original concept of killing zombies with the equally original concepts of repetitive gameplay and a single player experience that lasts around five hours, you're totally in luck and I hate you. 5.5/10

Today's biggest selling hits tend to be the focus of attention in most magazines and websites, but some truly excellent games sometimes get lost in the shuffle. Every once in a while we'll spotlight one such title that we consider a must-have for any serious gamer. Hopefully we'll be able to help smaller publishers out while simultaneously exposing you to original and fun experiences you would have otherwise overlooked.

Our first hidden gem is: 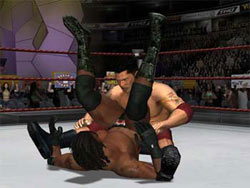 Realistic graphics and intense gameplay make this hidden gem a worthy addition to your rare games collection.The creative geniuses at upstart EA Games have created a compelling and surprisingly strategic game which they call "football". Teams can have up to 11 players on the field at a time, and each team takes turns attempting to advance the ball across the 100 yard playing field into their goal while the opposing team tries to stop them. It sounds simple enough, but there are a few additional rules which give the game a fair amount of depth.

Gameplay itself is exciting, as you take control of impossibly gigantic men and smash your opponents with oddly satisfying brutality. This violent aspect of the game might ruin your immersion, as it seems more like some futuristic gladiatorial combat from a sci-fi movie like The Running Man than an activity which any sane man would partake in. Still, games are all about providing us with experiences that we can't go through in real life, so I can't really complain.

Perhaps the most curious and entertaining aspect of the game comes from the fictional "Madden" character which EA Games has created. This loveable mountain of a man acts as the game's ambassador, and he spouts the most inane and obvious of comments as comic relief when the action on the field gets too frighteningly visceral. The addition of Madden was a stroke of genius that injects personality into a game that most other companies would have been content to sell by itself.

In a clever bit of commentary on consumerism in the modern world, many of the stadiums you play in display gigantic advertisements around the playing field. Some of the stadiums themselves are even named after corporate entities! While that's quite a stretch, it did elicit a chuckle from this gamer.

You owe it to yourself to pick up Madden NFL 2006. It may be hard to locate and the clerk will probably flash you a puzzled look when you bring it to the counter, but it's well worth the hassle.