EXPECTATIONS: Cedar Rapids turned out to be one of the big comedies to come out of the Sundance Film Festival this year. After his role in The Hangover and five seasons on The Office, Ed Helms has been on a comedic hot streak lately. With that in mind, I expect a decent, if not hilarious, leading performance out of him. Other than that, I'm honestly not quite sure what to expect out of this one, which actually has me all the more excited for it.

REALITY: Great character studies come in many different forms. There Will Be Blood, for example, is about as different from Scott Pilgrim vs. The World as a movie can get, but the two go about breaking down each of their main characters in a way that exposes exactly the kind of person they are underneath. Maybe they learn something, maybe they don't. Either way, we come to a better understanding of them as people. In its own way, Cedar Rapids is another such character study, and not necessarily the laugh-a-minute comedy being presented in the trailers (though it is plenty hilarious).

We meet Tim Lippe (Ed Helms) as a meek small-town insurance salesman. Having lost both his parents years ago, he lives a sheltered existence banging his 7th grade teacher (Sigourney Weaver) and generally not doing much else with his life. When his company's star salesman is found dead, Tim is forced to travel to Cedar Rapids, Iowa for an annual insurance conference. There, he discovers just how distasteful the real world can be. Tim shares a hotel room with straight-laced Wilkes (Isaiah Whitlock, Jr.) and alcoholic womanizer Ziegler (John C. Reilly), who show him the ropes of the conference and show him that the head of the industry (Kurtwood Smith) isn't all he's cracked up to be. Add to the mix a married insurance agent looking for a little action (Anne Heche), and Tim finds himself trapped in a world in which he's totally uncomfortable. Tim soon learns that he's going to have to break a few rules in order to win the coveted Two Diamond award for his company, which doesn't sit well with his boy scout nature. 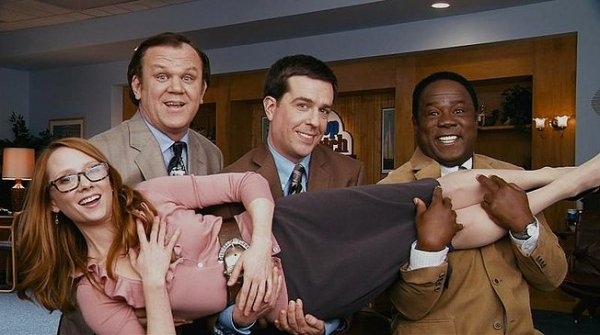 This looks more like a tacky T.V. guide promo for some new terrible sitcom.

While attempting to be more of a comedy, Cedar Rapids explores much of the same territory covered in 2009's Up in the Air. Both films deal with the realities of the business world and its effect on the average Joe employee. As characters, Tim Lippe is on the opposite end of the spectrum from George Clooney's Ryan Bingham, but the things they learn about business (and life in general) are remarkably similar. Tim, of course, has considerably more to learn, and it's this that generates much of the film's comedy. We're not told it explicitly, but Tim may or may not suffer from some kind of personality disorder, and dropping straight into a world of sex, drugs and John C. Reilly causes Tim to freak the fuck out.

Once the film has had its fun with all the culture-shock comedy, it settles into a groove of teaching Tim (and the audience) that nobody is as perfect as we'd like to imagine them. There's corruption and shady business going on everywhere, and most people want to drink themselves stupid just to get through it. Then again, sometimes the worst people turn out to be the best people.

The film's strength lies 100% in its cast. In the lead, Ed Helms performs admirably. Tim is a bit of a blank slate, but as we watch him encounter more and more of the darkness of the real world, we can see a genuinely decent person underneath all the neuroses. It's that heart that carries the film through its sometimes patchy middle section. John C. Reilly steals most of the scenes he's in right out from under Helms, but he manages to restrain his character just enough that it doesn't become the Dean Ziegler Show. Stephen Root and Alia Shawkat also show up briefly (as Tim's boss and a prostitute, respectively) and shine in their moments as well.

There's really not much that can be said against Cedar Rapids. It's a modest film about an equally modest character and it accomplishes everything it sets out to do. This thing could've easily gone off the rails and become an obnoxious Napoleon Dynamite clone at any moment, but the cast and crew knew better. Tim Lippe is a well-rounded character who's actually worth rooting for, and Ed Helms gives the character, as well as the film, a surprising amount of heart without falling into caricature. Until something funnier comes along, I'm tempted to call Cedar Rapids the front -runner for Best Comedy of 2011. It's a hell of a lot funnier than Hall Pass, anyway.

MINORITY REPORT: I once attended a similar conference. Each of us would sit in a circle and take turns to introduce ourselves, explain our chemical intake habits and justify our treatment of women. It was something of an eye-opening experience, if a little contrived. I wouldn't have minded so much if not for the unorthodox method of invitation and the fact I was required to wear a straight-jacket, which is mighty uncomfortable if you're used to moving your arms at all. - Montague "Legally Sane" Smythe