EXPECTATIONS: Every year, we get a small handful of movies designed in an executive boardroom to make baby boomers sing empty praises like "It renewed my faith in the human spirit," and "Its message was so clear," when in reality they're anything but. I'm not saying The Help is going to be one of those movies, but something about it strikes me as being the same sort of cloying phoniness that made The Blind Side so insufferable (and insufferably successful). Then again, I'm a young white guy from The South, so what the hell do I know?

REALITY: I would like to believe that my generation is enlightened enough to accept that racism in any form is a ridiculous thing. It's 2011, the Civil Rights movement is a generation or two behind us, so at this point any film on the subject of racism is going to look at it through a prism of "How could people be so stupid?" That said, The Help seems intent on making Southern racism seem as bizarre and alien as conceivably possible. I was genuinely surprised when The Help ended and Rod Serling didn't step into the frame to say "Submitted for your approval..." 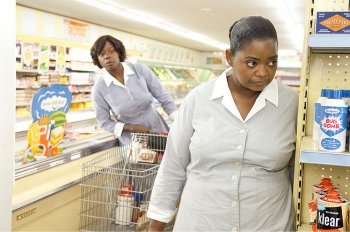 You always bump into someone you're trying to avoid at the supermarket.The Help tells the story of what it was like to be an African-American maid raising white children in the South in the 1960s. We know this, because someone comes right out and says it about ten times during the course of the film. Anyway, The Help focuses on a girl named Skeeter (Emma Stone), who is fresh out of college and looking to make a difference in the world through journalism. She decides to write a book about the lives of the black maids in Jackson, Mississippi. Aibileen (Viola Davis) is her primary interviewee; she's been raising white kids her entire life, and she finds it particularly depressing that her current employer has no business having children at all. Meanwhile, Hilly Holbrook (Bryce Dallas Howard), captain of the local Women's League of Women, kickstarts an initiative to force maids to use separate bathrooms, which doesn't sit well with anyone but herself.

If I wanted to go into the rest of the plot, I'd wind up spending the whole review talking about every little thing that happens. There are dozens of secondary characters with their own little side-stories, but most don't have all that much to do with the central plot, which itself winds and meanders and wastes a lot of time not going very far.

The biggest problem with the film is that it's not sure whether it wants to be a serious drama about race relations or a silly comedy about black nannies. At times, The Help feels like it's trying to have its cake and eat it too. And by cake, I mean pie. And pie, I mean shit jokes. Actually, there's really only one shit joke in the film. Once the joke is made (or rather, once the scene occurs, because it's really not that funny), the movie reminds us of it every 5 to 10 minutes. Whole scenes are written around some character or other basically saying "Don't forget about The Shit Joke." At a certain point, the film kind of stops being about racial tensions and becomes more about The Shit Joke. It's the big turning point in the plot, actually. 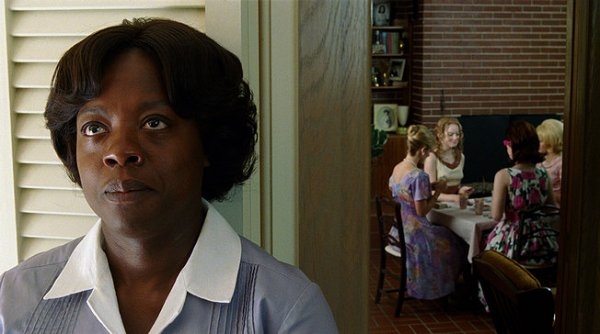 And you thought you hated your job.

Think about that for a minute. The plot of a movie about the tension between black maids and their white employers hinges upon a Shit Joke. Now, maybe this was just the theater in which I saw the film, but people thought this was fucking hilarious. And then every time someone makes reference to it, it brought the house down. Maybe the movie is trying to say that these racist white people deserve to be mocked and laughed at, and thus begins cracking jokes at their expense. Even if that were the case, it's tonally inconsistent with the story we're being told. It'd be like Ralph Fiennes slipping on a banana peel during Schindler's List. Sure, it might be funny, but is it really appropriate?

One thing I can say for The Help is that its cast is pretty great. While a few of the actresses wind up embarrassing themselves (Jessica Chastain essentially plays the wacky Hollywood parody of her character in Tree of Life), most of them play their parts remarkably well. A lot of critics have already used the dreaded O-word*, but suffice it to say that Viola Davis and Emma Stone turn in excellent performances. Allison Janney gets a few good scenes as Skeeter's mother, and David Oyelowo (the villain of Rise of the Planet of the Apes) makes an impression as the local preacher. Oyelowo is also one of the only men with a substantial speaking role. Guys pop up here and there, but the movie makes it pretty clear that the South in the 1960s was populated almost exclusively by women.

I'm willing to bet that of all the films released this week, The Help is the one that is of the least interest to our target audience. Nothing explodes, no one gets killed by a super-villain and Nicolas Cage isn't in it. If you'd like to see a movie whose version of 1960s racism is "White women hate everybody," then this may be a good bet. I can't imagine this being based on any sort of reality, but then again this is a film where A Shit Joke dictates pretty much everything, so maybe that's by design.

MINORITY REPORT: Whenever a film like this comes along, I have to wonder if the filmmakers are trying to downplay the existence of racism by saying "Hey, look how bad it used to be. Compared to that, racism no longer exists!" Which is completely meaningless to this generation. - Ian "ProfessorClumsy" Maddison