EXPECTATIONS: I'll admit this is a franchise I sort of tuned after the first installment, so maybe I'm not the best judge, but can someone explain to me how this series has kept going? It's been twelve years and five installments of the same story. It can't possibly pull in as much money as the Paranormal Activity or Saw franchises, and it also doesn't make horrible things happen to people as well as those series do. I thought the producers even realized it, which is why they called the movie before this The Final Destination, then proceeded to make that the least honest title since The Neverending Story.

Old ham Tony Todd returns as Guy Who Explains the Plot. It's a demanding role.

REALITY: Folks, I've been doing this for you guys for a little over a year now, and I feel that we've established a bit of a rapport. Week in and week out you say "There's Vargo, that clever rapscallion! What does he have to say this week?" and now I'm asking you, the reader, to trust me when I say this: Final Destination 5 is pretty damn clever. Really.

Here's the thing: There's much more going on with Final Destination 5 than there seems to be, and I almost feel like I'm cheating you out of an experience by letting you know that much. I justify it by telling myself that if you're not the kind of person who sees every single one of these movies no matter what, then you're probably the kind of person who would need a lot of convincing to get your butt in the seats.

Oh my God! The whole bridge just snapped!The story is the same as all the other films in the franchise: A group of attractive young people (plus David Koechner) survives an incredibly unlikely event (this time a bridge collapse) because one of them had a vision of it happening only minutes before. (This time Nicholas D'Agosto plays the seer). Then, after some eerie warnings from Mr. Bludworth (Tony Todd), they start to get killed off one by one in increasingly fantastical manners.

Most of the "fun" and appeal of the Final Destination movies comes from seeing the multitude of creative ways that the writers come up with to kill people. Entire scenes are built around long tracking shots of the Rube Goldberg-like death traps they've made out of locations like the gym, or a kitchen. The message of this movie, of the entire franchise, is basically "There are literally millions of stupid things that can kill you no matter what you do, so enjoy life while you have it." Admittedly, this message is weakened when it comes immediately after spending two hours of your too-short life watching another Final Destination movie.

In order to breathe fresh life into the movie about death, this time we add a new rule: If you kill someone before Death comes for you, you get all the time they were supposed to have left in their life. Now, there are some incredibly obvious problems with that concept, and to the film's credit, it addresses them. However, it also uses this potentially interesting point and takes basically the most predictable, least interesting path with it. Admittedly, I am doing a poor job of convincing you this movie is worth seeing thus far. 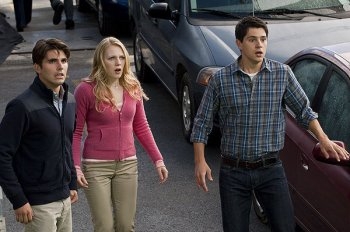 Something seriously scary is happening over there.So forget everything I just said. The people who buy tickets for this movie aren't buying for story or for moral ambiguity, and the creators know this. They know it so hard that the credits roll over a montage of death scenes from all five movies while AC/DC's "If You Want Blood, You Got It!" That right there? Inspired! Hell, even the song title sounds like what my oh-so-clever critic colleagues might use as a headline, and the producers beat them to it! Honestly, the whole movie is about messing with us. The home death traps I mentioned? Half the time they don't work; they're a fake-out for killing characters in a random and bloody, but still fairly mundane way. It's like when a bunch of kids start talking about the grossest thing they could get each other to eat, and just when one of them gets to the gross part, a bigger kid punches him in the back of the head for being such a weird dork.

I honestly think the Final Destination creators were just as surprised to get a fifth movie as I was to see it. Because of that, they go all out, and it is pretty glorious when it hits its stride. Yes, there's plenty of blood and gore, and lots of 3-D stabbings to satisfy the sick bloodlust of slasher fans, but there's also a remarkable self-awareness I didn't expect to see. It's a Grindhouse flick and it revels in that fact, without hitting us over the head saying "Look how grindhousey this is!" like Machete or Hobo With A Shotgun. From the opening credits, which feature the death instruments from past films smashing through the glass screen at the audience, it's a subtle celebration of the genre, and of the series itself. (Also, movie screens aren't made of glass.) It's like they were saying "Holy crap, we've been making these things for twelve years?" If this sounds self-indulgent, it is, but in the best way possible.

That brings us to the point where you have to trust me. As with Insidious, I had many issues and complaints during the viewing of the film, all of which began to make sense and become incredibly smart by the end. The entire film is building up to a point where, when you realize it's happening, will make you say "They're not really doing that, are they?" Then you will smile as you realize, "Yes, yes they are." It's some brilliant foreshadowing in a movie/series that prides itself on its lousy foreshadowing. This is the best kind of movie twist: One that is just as enjoyable regardless of whether you saw it coming. As a result, it's one of the best types of movie experiences: It not only does what you expect it to, but also it gives you something extra in addition.

MINORITY REPORT: The law of diminishing returns dictates that the worse a horror sequel is, the more money it makes. Sorry Marty, this will never get a sequel. - Joseph "Jay Dub" Wade