EXPECTATIONS: Setting aside the decidedly sketchy inspiration for the film, I'm not too sure what to expect from 30 Minutes or Less. I enjoyed the director's previous film, Zombieland, but I'm not sure why he thought he needed Jesse Eisenberg back for this one. This seems more suited to Michael Cera's wheelhouse, and I'm not just saying that because one of them went to the Oscars this year. All I really want out of this film is to see Aziz Ansari and Danny McBride try to out-yell one another. If they turn their gimmicks into the joke, maybe they'll finally be funny.

REALITY: In a lot of ways, 30 Minutes or Less is this year's Cop Out. It's a poorly conceived attempt at recreating the kind of silly-yet-violent buddy-action-comedies that the '80s seemed to shit out every other week. The film tries to mimic that style, it mimics the music, it even mimics the plotting. You know, how there'll be two or three big action scenes, with the rest of the film padded out with pages and pages of characters standing around talking about the plot instead of doing anything. 30 Minutes or Less wants to be Lethal Weapon, but it winds up becoming Short Time. 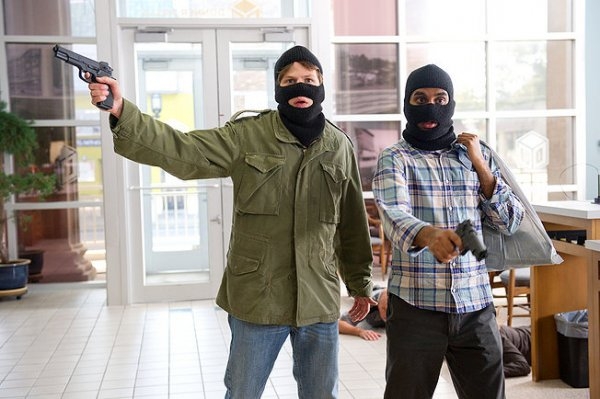 Do you two even know where you are?

Jesse Eisenberg plays Nick, a 20-something pizza delivery boy whose entire life seems to be moving on without him. His best friend Chet (Aziz Ansari) is a teacher now, his girl is moving away soon, and then two wannabe-gangsters (Danny McBride and the never-not-unfunny Nick Swarsdon) kidnap him, strap a bomb to his chest, and force him to rob a bank. He's got ten hours to steal $100,000 or else he goes boom. 2011 just isn't Nick's year.

I realize now why director Ruben Fleischer wanted Eisenberg back for this film. It's because he clearly had no idea what to do with the material. The premise is so grim, and the overall tone of the script so mean-spirited, that the only way to make any of it work was to bring back Eisenberg, who wound up becoming a respected actor in the two years since Zombieland. To his credit, Eisenberg fucking sells it. In a movie filled with irritating comedians trying their best to come off as tough guys, he plays up his character's desperation and turns Nick into someone we want to root for. 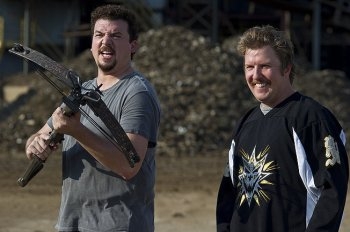 He has to have a crossbow because it's funnier than a gun, you see.But the film itself isn't entirely sure who it wants us to root for. On the one hand we have Nick, just a regular Joe with a shitty job who happens to be wearing a bomb-vest. Sure, we want to see him make it out of this one alive. That makes sense. On the other hand we have McBride and Swarsdon's characters, Travis and Dwayne. Somewhere in the second act, one of them begins having a change of heart, which may or may not infect the other. We already know why they want the money and what they plan to do with it, but suddenly the film takes a turn and tries to make us root for them against Michael Pena's character, who for some reason is out to kill them.

As far as storytelling goes, that makes sense. If you want to make your villain sympathetic, simply pit them against an even worse villain. It's why Return of the Jedi introduced the Emperor. But here's the thing: In a bank heist comedy where the villains are scumbag losers trying to kill someone for money, why would you ever do that?!

So by the end of the movie, we know we want Nick and Chet to come out on top, but then the movie starts planting little seeds of "Well, maybe it wouldn't be so bad if Travis and Dwayne got the money and killed everyone..." It wants us to like the bad guys, even when there's no reason to and really no way for their story to end well. This winds up making the third act kind of interesting, but only because by that point we have no idea who the movie is actually siding with. In the end, nobody gets what they want, the bad guys have become weirdly sympathetic, and the big shootout finale burns itself out before it even gets going. It's less like any comedy I've ever seen and more like a first draft of a Greek tragedy.

I can't recommend 30 Minutes or Less to anyone other than Jesse Eisenberg fans. It's not particularly funny, the script has no idea what the hell it's doing, and it somehow manages to make 85 minutes seem like a goddamn eternity. For a movie so obsessed with buddy-cop comedies, there are practically no police officers anywhere to be seen. That's a shame, because I'd really like someone to issue Ruben Fleischer and his writers a warning ticket. 30 Minutes or Less isn't a crime against comedy, but if these guys don't straighten themselves out, I predict some dark, dark days ahead.