EXPECTATIONS: Lars von Trier has made some powerful films. He's the director most likely to make headlines for saying outlandish shit. He's the go-to example for misogyny in art films. And, based on the tone-deaf trailer for Nymphomaniac, this may be a misfire, a gratuitous and intentionally shocking demonstration of von Trier's inability to empathize with women or understand the eponymous condition. This may be his Pisschrist.

REALITY: That Rammstein recorded a pummeling theme song for Nymphomaniac (sample lyric: "NYMPHOMANIA!") should tell you a lot about Nymphomaniac, in which writer/director/troll Lars von Trier tosses his interests, fetishes - and, yes, his shitty ideas about women - into a minefield and tells you to go fetch. And, because only the first two hours of his five-hour opus ("the Lord of the Rings of fucking," to paraphrase a friend) is available to American audiences, with a second two hours due in two weeks and a unified cut due sometime in the next year, it's an incomplete film, one that teeters between plausibility and implausibility, art and trash, profundity and pseudo-profundity. Of course, as some aspects of the narrative hint, this may be intentional and part of a grand statement on the failures of narrative fiction... 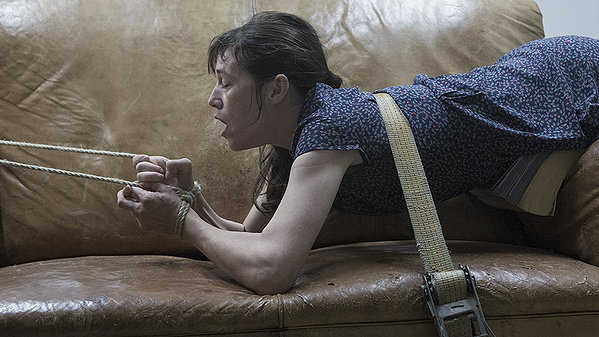 This is going to be fun!


Suffice to say, I don't know where to begin. Nymphomaniac begins with a black screen that runs longer than a minute - long enough, anyway, for me to double-check that Amazon Instant Video didn't take a shit and die. Then, von Trier's camera sways through some rainy English city - we're never told it's an English city, but Scandinavian and American actors speak with English accents, although that's only in flashbacks so maybe we're no longer in England - until it rests on Joe (Charlotte Gainsbourg), splayed out and bloody as if she jumped from the building above, got robbed or merely fell on her way back from a Halloween party, all of which are equally possible. For whatever reason, the Rammstein song kicks in. The mysterious Seligman (Stellan Skarsgård) insists on nursing her back to health (instead of, you know, calling an ambulance or something) in his moldy apartment, where she tells him she's a bad human being and he says there's no such thing as a bad human being and bloviates about fly-fishing and elaborate lures and she responds, "To begin with the bait, I discovered my cunt as a two-year-old." Then, within the flashback that begins with a two-year-old looking down at her vagina, we flash forward a few years and two children are taking off their undies, using the showerhead to flood the bathroom floor and sliding across it in a game she calls Frog, complete with a cut to footage of a frog leaping from his pad. And then we find out she really liked climbing rope in gym class for the sensation 'twixt her nethers. 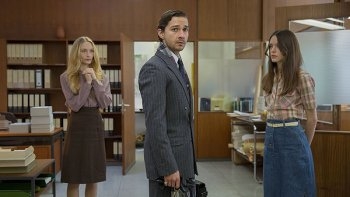 Whip it out, you plagiarising fuck.All of this is handled rather tastefully - compared with what comes later in the film (no pun intended), anyway - but von Trier takes almost a sick delight in confronting us with his blunt take on child sexuality. None of this, of course, is as scarring as the image of Jerome (Shia LaBeouf) spitting on his transformer as he prepares to sodomize Joe (Stacy Martin, in flashbacks) during the loss of her virginity. How Steligman ties Joe's description of this experience to mathematics (and, later, music) is a wonder of literary contrivance, bold bullshit to elicit simultaneous ridicule and awe - which, again, may be part of a larger theme Nymphomaniac is working to establish. If Antichrist and Melancholia were legitimately profound statements on grief and depression, respectively, Nymphomaniac is more playful (and darkly funny, occasionally), as if von Trier is turning the camera on himself, using the nested-narrative structure to examine his own muddy ideology - in which disparate disciplines like fly-fishing and music can converge with musings on cake forks and Russia, hardcore sex, and LaBeouf's unappetizing dick-spitting under the banner of capital-A Art - while dodging critics who say he hates women by building his story around a woman who hates herself & and, of course, a wise older gentleman who works in vain to restore her self-esteem.

It's a tad reductive to call von Trier misogynist. He is, if the suffering he inflicts upon his female characters in previous films is any indication, but in Nymphomaniac, he proves that he's a misanthrope, a man who hates all people equally, regardless of gender. While Joe fucks man after man with the same blank expression (unless she's faking an orgasm or, on two occasions, either experiencing an actual orgasm or crying), the men are two-pump chumps, adulterous spouses, overly confident in their sexual prowess (bolstered by Joe's assurances that she came), fetishistic, clingy or some combination of the above. In the film's most harrowing scene, the spurned wife Mrs. H (Uma Thurman) brings her three children 'round to remind Joe that her actions have consequences, but she's still an archetype, the shrill harpy ennobled in her suffering. Steligman is asexual and professorial, jumping backwards through flaming pedagogical hoops to connect Joe's tale to one esoteric topic or another. Even Joe's father (Christian Slater), a naturalist whose obsession with trees opens another window for von Trier's writerly musings, exists only to a) nudge us towards assuming Joe has daddy issues and b) suffer an undignified fate. If Steligman says there are no bad people, von Trier's screenplay says there are no good people.

That maybe explains the Rammstein song, the montage of penises that plays out like the supplemental CD-ROM for a human sexuality textbook, the portions of Joe's story that scream "unreliable narrator!" and, of course, the hardcore sex. It's simultaneously exciting and numbing, the essence of any nymphomaniac's sexual history. By the end, we're Joe-by-proxy, fearfully moaning, "I can't feel anything." Nymphomaniac: Volume I doesn't make for pleasurable viewing (and, judging by the footage from Volume II that plays over the credits, the second half won't be any fun at all), but as messy and problematic as it is, it's a fascinating challenge from a director: If the goal of most films is to make us feel something, what do we do with one that works so hard to make us feel nothing?

MINORITY REPORT: I first discovered my cunt at the age of 24. His name is Sean and he writes movie reviews. - Ian "Professor Clumsy" Maddison