EXPECTATIONS: There's little to expect from a movie adaptation of a cartoon show that aired decades before my birth. It's not even like Mr. Peabody has the kind of cultural relevance of Top Cat or The Flintstones, that it might remain in the public consciousness enough to have any kind of relevance today. What I'm trying to say here is I have never heard of either Mr. Peabody or Sherman before.

REALITY: Watching Mr. Peabody & Sherman is a very strange experience for those who share my political leanings. It's like listening to a speech you almost agree with, but that starts with the words "My fellow Republicans..." You can't help but wonder at the self-important meaning behind the seemingly progressive words. It seems at first to be advocating some human rights equality, but over time it seeps under your skin and starts to itch that unmistakable itch of libertarian apologism.

Mr. Peabody (Ty Burrell) is not just a talking dog; he is the first dog to enroll in university, the first dog to win the Nobel prize and the first dog to win the right to adopt a human ... oh, and he invented time travel, but that's a secret. The adopted human in question is Sherman (Max Charles), who is off to school for the first time. Once there, he meets the cruel, manipulative Penny (Ariel Winter) who provokes him into a fight which ends with him biting her arm. To smooth things over, Mr. Peabody invites Penny and her parents (Leslie Mann and Stephen Colbert) over for dinner to make a show for prejudiced social worker Ms. Grunion (Allison Janney), who desperately wants to take the boy away from his dog. However, in attempting to entertain Penny, Sherman shows her the time machine - known as the WABAC - and loses her in ancient Egypt. Now, Mr. Peabody and Sherman must travel back in time and rescue her. 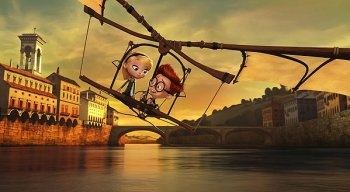 The film opens with Peabody and Sherman travelling back to the start of the French revolution. There they have cake with Marie Antoinette and witness the uprising of the poor, starving common folk. Using his incredible wits, Peabody is able to escape decapitation and fight off the campy, inept revolutionaries in order to return to his comfortable life in his massive studio apartment. Upon leaving, he asks young Sherman what he has learned from his experience.

"The French revolution was crazy," he replies. "All those people getting beheaded and nobody standing up for what was right."

Of course, if only those revolutionaries had pulled themselves up by their bootstraps instead of inventing a device specifically for separating aristocrats' heads from their bodies to keep up with the amount of public executions they were doing, so great was their rage at being so downtrodden by an uncaring society of privileged cake eaters. Why, Mr. Peabody is a dog and he still managed to succeed by embracing the confines of the society that trod him under. He earned his rights, and his bread, they weren't given to him.

That's the only logical message I can construe from the prologue of Mr. Peabody & Sherman. And that's just the prologue! They didn't even establish the plot yet and we're already in politically questionable territory. The main thrust of the narrative centres around whether or not Mr. Peabody, a dog, has the right to be considered a parent to Sherman, a human. Now, if you were to replace every instance of the word "dog" in this film's script with a racial or homophobic slur, the message would be a lot less subtle and almost admirable if it weren't mired in libertarian weirdness. 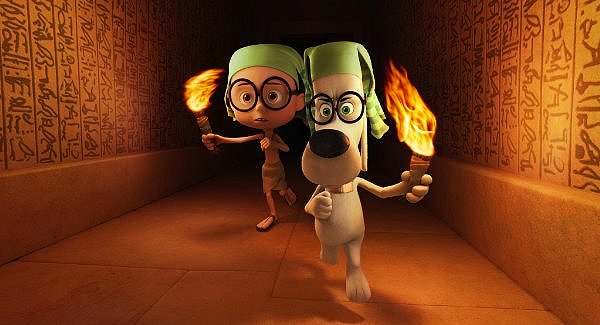 But you can always trust your dad. Even if he's a dog.


When we first meet Penny, she approaches Sherman in the school cafeteria and calls him a dog. "Your dad is a dog, so you're a dog," she says. Then she throws his food on the floor and tells him to fetch. That night, Peabody asks Sherman what happened and is visibly disturbed when he replies, "She called me a dog." Of course, the situation itself makes it apparent that Peabody and Sherman are fundamentally equal, and if it were a gay couple instead of a dog, that would speak for itself.

That leads us to the next issue: Penny. She is a terribly unlikeable character from the outset and as the central female character is rather troubling. She is cruel and manipulative throughout the film, but is treated as someone Sherman should have romantic aspirations towards because, I guess just because she's a girl and that's what girls are for. Ignore the fact that she almost kills him at one point by being manipulative or that she only takes an interest in him after he rescues her from certain death on no less than two occasions. It's clearly a loving relationship that will definitely last. All of this troubling and weirdly sexist subtext could have been avoided if they'd just given us a likeable character instead.

The only likeable character in this movie is Sherman. Mr. Peabody is far too arrogant, selfish and rich to be in any way sympathetic. It is only his relationship with Sherman that saves him, or it would if it weren't consistently being pushed as a more important issue than say ... the French revolution.

My initial response to this film wasn't entirely negative, it has some good set-pieces and an excellent voice cast (including Stanley Tucci, because the kids love him). But, it's one of those films that languishes with time, one night alone with the memory of Mr. Peabody & Sherman is enough to make you hate it. By this point, I actively want to kill this movie.

MINORITY REPORT: THOSE ARE MY BOOTSTRAPS. GIVE THEM BACK YOU ARE A DOG. THEY DON'T EVEN FIT THE CURRENT GLOBAL ECONOMY, EMPLOYMENT RATE, AND FINANCIAL MODELS. - Martin R. "Vargo" Schneider