EXPECTATIONS: Despite having virtually no promotion whatsoever, I'm relatively interested in this one. Psychological-thriller Forest Whitaker is one of my favorite kinds of Forest Whitaker, and I am always happy to see Anthony Mackie getting work. Additionally, it's very welcoming to see a film with a primarily Black cast that isn't a terrible romantic comedy, period piece, or made by Tyler Perry. 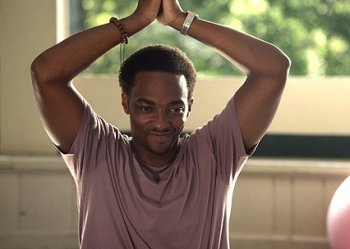 REALITY: It's tough to argue whether morality has any bearing on quality while analyzing art and film. While we tend to have a more forgiving or understanding response to movies that appeal to our value systems, but I know many people who will defend the integrity of amoral or anti-moral films like Salo or A Serbian Film. Hell, there are films made by literal Nazis and Klansmen which are essential-viewing curricula for every film class in the world. Fortunately for me, Repentance is not well-made in the slightest, and its moral content isn't "challenging" so much as it is just plain stupid, so I can feel completely justified in the anger and bewilderment I feel now.

Repentance features Anthony Mackie as Tommy Carter, a successful therapist and life coach who is famous for a self-help book he wrote following a near-death experience in a car crash with his brother Ben (Mike Epps). In need of money to help Ben, Tommy agrees to return to private sessions with a new patient, carpenter Angel Sanchez (Whitaker), who is hoping to get over the death of his mother. When Tommy discovers Angel's case is deeper than he thought, he attempts to break off their relationship, which naturally causes Angel to kidnap him and torture him with power tools. Sometimes Angel takes a break to play with his daughter or to text Tommy's wife, but most of the latter half of the movie is spent watching Angel find new ways to abuse Tommy while quoting from his book.

This is actually the only good part of the film, though, which makes it all the more frustrating what a waste of talent and concept this film is. Whitaker's performance is strong and suitably creepy, as he clearly enjoys twisting his mouth around pseudo-spiritual self-help mantras. At one point, he mockingly sets up a group session because there are few tortures more effective than sharing your feelings with people. The concept is solid, but the film has nowhere to go with it. The audience knows from the very first scene what Angel wants from Tommy, and it just spins its wheels in a sadistic and pedantic manner. Little to no progress is made in any direction, and finally the film decides to have Angel kidnap two more people just because eventually someone has to do something. 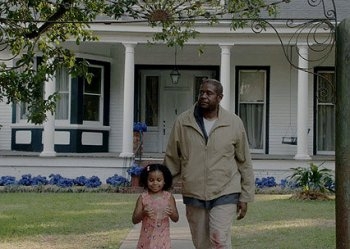 You're my hero!I mentioned earlier that the movie's moral compass is being held on a magnet, and I don't even know where to begin. The film seems to be condemning of pseudo-intellectual psychology, and it even contains a scene where Angel intentionally dumps his medications, following Tommy's advice. The idea here seems to be that, as one terrifying IMDB user puts it, "No one needs a 'life coach.' Everyone can find salvation inside their own heads." This is an issue when you're dealing with someone whose head and solutions are not right. But the film constantly attempts to vindicate Angel as some tragic anti-hero. He even gets a sad piano motif. The movie actually asks you, with a straight face, to look at the crazed sociopath who kidnaps and tortures three people in his basement, and sympathize with him. He's given a cute little kid and a strangely loving ex-wife to push his martyr backstory. "No, it's okay because his Mom died." Either that, or the movie is saying "Holistic rituals are scams, but shoving crowbar through someone's leg is also wrong", which I'm pretty sure is from a speech Stan gives at the end of a South Park episode.

Moral issues aside, the film is just poorly made. Mike Epps' acting is so ridiculous and his role such a caricature that I genuinely thought he had wandered in from a Key and Peele sketch. The plot offers no surprises and the "twists" it tries to implement come out of nowhere and make no sense. The narrative just introduces past events to flashback to out of the blue, and the whole thing is just a confused, muddled, mess. I've never believed that violent films cause violence, but I am reconsidering this policy now. Given the opportunity, I believe I might kidnap director Philipe Caland and hold him hostage in the Current Releases basement until he confesses to me what the hell is wrong with him that he would make such a movie.

MINORITY REPORT: The basement is already getting crowded with all the hitchhikers Monty brings home. It's like having a belligerent cat, except with more visits from police officers. - Ian "Professor Clumsy" Maddison