EXPECTATIONS: Ride Along looks like a comedy vehicle built for the sole purpose of letting Kevin Hart embarrass himself. He's been stealing scenes in bit parts for nearly a decade, so it's about time he had the chance to prove himself as a lead. That his role in this film apparently consists of flailing his arms and screaming in Ice Cube's face does not inspire confidence. Then again, if anyone can save a film like this, I'm betting it's going to be Ice Cube.

REALITY: In 2005, screenwriter Blake Snyder wrote a book titled Save the Cat! What was meant to be an insider's look at the conventions of Hollywood writing was quickly embraced as a book of cinematic mad libs that idiots could use to stitch together narrative monstrosities worth millions. Finally, the shadow puppets and black magic flowing out of Hollywood could be harnessed by every coffeehouse rat in America! In that book, Snyder mentions a script titled "Ride Along," and how he considers its one-sentence concept narrative gold. (It should be noted that he said the same thing about the Vince Vaughn vehicle Four Christmases.) Nine years and multiple rewrites later, Ride Along is now a real movie you can see at your local cineplex. You could choose to see a dozen other movies right now, but hypothetically, let's say you chose Ride Along. You chose poorly.

Man, that was great. I'm so glad I rode along.


After a lengthy introduction in which detective James Payton (Ice Cube) chases down a criminal by running him over in a flaming truck, we meet Ben Barber (Kevin Hart). Ben is a high school security guard with an obsessive love for Call of Duty and has ambitions to enter the police force. When he asks James for his sister's hand in marriage, James instead makes him a deal. To see if Ben is man enough to marry his sister Angela (Tika Sumpter), James offers to take him on a ride-along. What begins as a series of bullshit tests to make Ben chicken out escalates into a deadly game of cat and mouse with an illegal arms dealer named Omar (Laurence Fishburne).

The fish-out-of-water angle; the potential for comedy giving way to action; the romance of a man fighting for love. You can see why Snyder was so hot on this concept, right? It is literally every movie you have ever seen. Throw in an unhealthy dose of Kevin Hart's travel-sized Chris Tucker schtick, and you have a tone-deaf comedy with so few actual jokes that I have to wonder if the people who wrote this movie even know what jokes are. 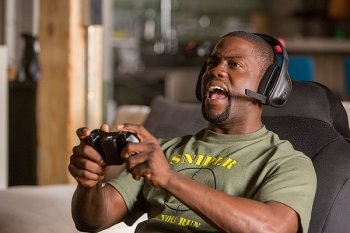 VIDEO GAMESThe biggest issue with Ride Along is that Ben's character arc makes no real sense. Early in the film, Ben shows he actually has some skill in defusing a situation. He catches the school's star basketball player cutting class to go drinking, and capably talks him out of it. Three scenes later, Ben gets punked by an eight-year-old when he asks the kid to rat on his brother. Eventually, Ben uses what he's learned on the ride-along to... um...

Actually, he doesn't learn anything. James tries to show Ben the ropes, but every time, Ben tries to look cool and winds up making an ass of himself instead. Every. Single. Time. You'd think he would accidentally do something right eventually, but he keeps finding new ways to endanger himself and those around him. I completely understand why James doesn't want this little turd to marry his sister, because he sucks at practically everything. It's amazing that Ben is alive to see the end of the film at all.

Ben's gaming skills, which he brags about to everyone he meets, are his only redeeming trait. Doubly embarrassing is that none of the thirty people who wrote this script have any idea what video games are, or how people play them. Did you know that a dedicated Call of Duty player can accurately identify any firearm on the planet solely by the sound it makes? Neither did I, but not only does James find this fact wholly impressive, it actually saves his life. That Ben can identify which guns the bad guys are using is somehow more useful than knowing that *BANG* *BANG* *BANG* means someone across the room has a gun.

Movies always make video gamers out to be idiot savants when it comes to situations of extreme duress. Ben stupidly picks up a thrown grenade and tosses it back because "They always have a five-second fuse!" Then the film waits thirty seconds for the grenade to go off, because Ben is also apparently a guru at spotting a dud grenade. It's always the shooting games that characters learn lessons from. I guess if it's good enough for the media to blame whenever there's a school shooting, it's good enough for Hollywood.

But what about other games? Surely there are video games out there that don't involve shooting people in the face or picking up somebody else's grenade. When will a kid become the best mayor ever thanks to his mad Animal Crossing skillz? When is a fat kid going to make it to the Olympics with the help of Sonic the Hedgehog? Never. The answer is never. But maybe I should consult the book on how to spin that improbable story into Oscar gold...

MINORITY REPORT: I've been playing Spelunky for months now and it hasn't made me any better at travelling into the depths of Hell with a jetpack and a handful of bombs. It hasn't even made me better at playing Spelunky. Hollywood lied to me. I want my money back. - Ian "Professor Clumsy" Maddison