EXPECTATIONS: When Quentin Tarantino calls a new film great, one of three things is true: a) he produced it, in which case it might be good; b) he presented it, in which case "good" has a varied meaning that can extend into "terrible;" or c) he had nothing to do with its production or presentation, and it's legitimately good. Enter Big Bad Wolves, the second feature film from pioneering Israeli horror directors Aharon Keshales and Navot Papushado, whose first film, Rabies, marked their country's first feature-length foray into horror. Tarantino, I'm happy to report, had nothing to do with its production.

REALITY: Last night, I was discussing Nightmare Alley - a 1947 noir film in which a carnival stagehand wonders aloud how far a man has to fall to become the live-chicken-eating circus geek and, of course, gets his answer before the credits crawl - with a classmate who felt the whole film suffered from that single bit of heavy-handed foreshadowing, which makes it rather predictable if you've ever caught The Twilight Zone on reruns. That's an unfortunate side effect of viewing older movies through a modern lens: There's nothing subtle about the films of the '40s and '50s, except what they wrote to dance around censors. And I still love Nightmare Alley. OK, so you know how the film ends and begins, but it's during the meat of the film, that middle 100 minutes, that Nightmare Alley serves up its grim surprises. 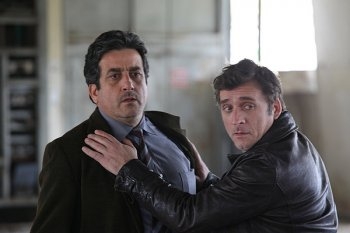 What? We're just playing shoulder pat.I imagine that classmate would have the same objection to Big Bad Wolves, in which Gidi (Tzahi Grad), father to a murdered daughter, forms an uneasy alliance with the disgraced detective Micki (Lior Ashkenazi) to kidnap Dror (Rotem Keinan), the schoolteacher they each suspect of killing children, and torture him until he reveals where he has buried the children's severed heads. It's unlikely that "decapitated children," "brutal torture" and "a lot of fun" will ever again share a paragraph in Current Releases, so listen up: Big Bad Wolves, in which two men avenge decapitated children through the magic of brutal torture, is a lot of fun. Well, it's a lot of things actually, including predictable, but "fun" is one of them. It's a genuinely good film that finds the lighter side of Prisoners, with a chubby Israeli standing in for bearded Hugh Jackman.

That sentence is improbable, but then again, Big Bad Wolves is an improbable film. Improbably, it weaves disparate tones, alternating between wacky and nihilistic, with tropes from disparate genres, including a trail of candy and a man on horseback, into a tapestry that's both cohesive and effective. Writer-directors Aharon Keshales and Navot Papushado do the cinematic mashup shtick so well, Quentin Tarantino's later films seem downright jarring in comparison. And it's easy to see why he lavished praise upon Big Bad Wolves, which stretches the effect of Reservoir Dogs' infamous torture sequence to feature length. We all know that cinematic torture can be visceral and awful, and as we dread the worst of what's to come in Big Bad Wolves, Keshales and Papushado find increasingly novel ways to draw out the tension. Hell, you can almost hear Stealers Wheel playing faintly in the distance.

And, look, anyone who's seen a film like Big Bad Wolves knows that this film can end only one of two ways. Either Dror's guilty, and he dies, or he isn't, and he dies. Because this film stands in criticism of torture as an interrogation method, and there's nothing subtle about its politics, you can probably guess which way this goes. However, that doesn't mean Big Bad Wolves doesn't surprise you along the way... or in its sucker punch of a final shot. This is a film that's far less interested in playing "is he or isn't he?" than "will they or won't they?" Early in the film, Gidi tells Dror exactly what he's going to do - breaking fingers, pulling toenails and a slow decapitation with a rusty saw - with the promise of a quick death if he tells them where the heads are buried. Yes, they show most of those things, but, like Tarantino (or the Coen Brothers), Keshales and Papushado refuse to dwell on the violence, which is graphic, but mercifully brief and punctuated by humor that's as black as space.


Is it OK to laugh at a film that includes so many taboo elements? I'm not sure, but for Big Bad Wolves, I'm willing to make an exception. It's clear that Keshales and Papushado take child rape and torture very seriously, treating the harshest of their subject matter as sacred cows while they find their jokes elsewhere - in random mishaps that befall the torturers, a foot chase without the usual cinematic concessions, deadpan dialogue (when the suspected child murderer tells them his mother is dead, Micki quips, "I thought you only killed children"), Jewish stereotypes, the frequent reversals of expectations and, in the film's wittiest moment, Arab-Israeli relations.

Last time these guys made a movie, they crafted something as uneven as it was entertaining, a slasher flick in which the slasher was almost an afterthought, able to stand idly off-screen while his would-be victims murdered each other in fits of rage... or, you know, after simple misunderstandings. But for all its faults, Rabies being too long and dialogue-heavy to maintain momentum for ninety minutes, they demonstrated they know how to craft both sick jokes and suspense, in a scene set in a minefield and another involving a bear trap. Big Bad Wolves is a giant step forward, both a near-flawless genre picture and the most exciting reason to set foot inside a theater during what's traditionally a shit month for movies.

MINORITY REPORT: I'm just gonna lay all my cards on the table here: I still need to see this film. I know my name is on the poster and everything, but...well...Look, a horror movie titled Big Bad Wolves is just a license to print money, okay? Even if it's just a few of those sweet, sweet VOD dollars. Can you blame me?

Can you blame me? I mean, look, in this day and age more studios are putting out more movies than ever, and more people are making more movies, and there's just not enough hours in the day to watch them all. So before you go off the deep end at me for putting my name on a movie sight-unseen, think about this: If you knew you could make money by putting a brand name on an unproven product, wouldn't you do it? Come on, seriously. Wouldn't you? I don't think you could look me in the eye, I mean look me dead square in the eye and tell me you wouldn't.

You would, wouldn't you? Of course you would. I mean, I'm sure the film's good, I've seen the directors' other stuff, so I believe in them, but if you magically found five new hours in the day that you could watch m...eh, fuck it. I'm out. - Quentin Tarantino