EXPECTATIONS: It would be unfair of me to claim to have any expectations about Devil's Due. It is a demon baby found footage movie. It will, undoubtedly, hit every cliché that both subgenres can muster up and will probably end in hopelessness. With even the Paranormal Activity movies abandoning horror for comedy, it seems that there's just nothing left to be wrung out of the found footage scenario with any earnest attempt to horrify. Devil's Due seems to have been made by people who missed that memo.

REALITY: If you'd have told me six years ago that I would one day see a film that made me long for the cleverness of the fourth Paranormal Activity sequel, I would have laughed directly into your open mouth, sputtering and spitting as I did so, and then immediately walked into traffic. Devil's Due has problems, oh so very many problems. Its main problem is a simple one: It completely lacks any sense of self-awareness. 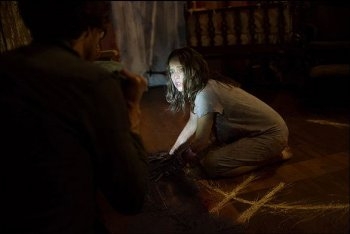 Help me, I am hormonal.Newlyweds Zach (Zach Gilford) and Sam (Allison Miller) McCall are enjoying their honeymoon when they drunkenly fall victim to a Satanic ritual that somehow impregnates Sam with an evil demon antichrist devil baby. Sam goes through a difficult pregnancy ... I say a difficult pregnancy, but what I mean is that Sam is tortured throughout the movie for the crime of being a woman with female reproductive organs and the ability to carry unborn demon antichrist devil babies in her mysterious belly space.

Now, having heard that, you immediately know how this is going to play out and I can assure you that you are absolutely right. I wouldn't mind so much (this could easily be an uninteresting film we could all ignore and never speak of again), but it does its best to fool you into thinking it might be clever and subversive early on.

We are introduced to Zach as an apparent rapist/murderer stalking Sam as his potential victim. From his camcorder's POV, we see him watch Sam through the window of a house as she talks to two other women. She eventually says goodnight and goes upstairs. Zach then climbs a drainpipe and sneaks in through the bedroom window. He creeps up behind her as she undresses to take a shower and then she turns around and it is revealed -- hahaha -- that they are to be married tomorrow and that the reason for his skulking is because of that age-old tradition that he is not to see his bride-to-be on the eve of the wedding. Zach then goes onto earnestly explain that he intends to record everything that happens in their marriage on his camcorder because that's what his dad used to do.

The reason I say this nearly fools us into thinking it might be clever is that it frames Zach as a character who goes about things in entirely the wrong way, coming across as monstrous to the impartial observer. Unfortunately, they never return to this idea again in the film and so all these early scenes serve to do is establish Sam as the inherent horror movie victim, destined to be stalked and murdered and objectified. The rest of the film sticks very firmly to its guns on this matter, showing us the terror of Sam's terrible physical transformation through the eyes of her concerned husband. 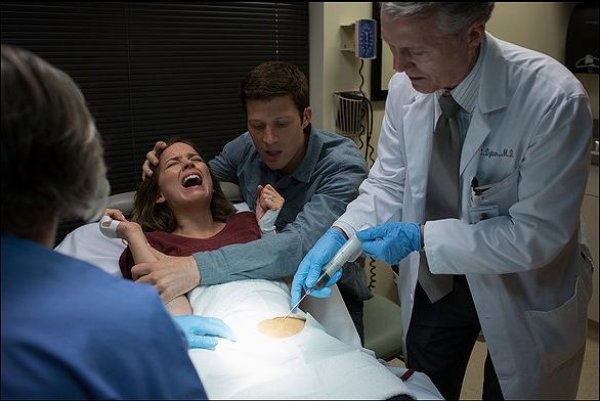 Please help her, doctor. She is a but a woman!


The fear of pregnancy, the idea that a woman's body is taken over by another entity and that she undergoes irreversible emotional changes, is hogwash. It is a fear born in men and it stems from two points of masculine self-obsession: 1) that a man's wife no longer belongs to him and is now the property of their unborn child and 2) that a man's wife will no longer be as physically desirable to her husband. Men, you see, are generally ignorant to the truth of the situation, which is that a woman is not their property, their bodies remain their own during pregnancy and there is no "switching of allegiance" upon conception.

I asked a trained science-ist and I can assure you that when a pregnant woman gets cravings, it has nothing at all do with the desires of the unborn infant whose soul now drives its mother's body and everything to do with any other craving a human might have: Z body craves what it requires. A scene in which Sam stares endlessly at raw minced beef in a supermarket before finally showing it into her mouth suggests the former. This film reads like it was created by a pro-life conservative trying to make a statement for the pro-choice camp.

What makes all of this worse is that in the final act, Sam feels the need to apologise to her husband before predictable things happen. Why does she apologise? Presumably she feels guilty about being the vessel for a demon baby. She is an impure sinner who allowed her body to be compromised by someone who was not her husband, we assume. I wouldn't mind so much if there was ever any implication that any of this was in any way her fault, but she is too inactive of a character to have done anything even slightly questionable, beyond being a woman. I'm reminded of the words of my colleague Sean Hanson in his review of Contracted: "Quit punishing your female protagonists for being women."