Life as We Know It; Secretariat; My Soul to Take

Secretariat Beats Mediocrity by a Nose.

EXPECTATIONS: Has Disney run out of sports stories to Disney-fy? Are we to expect the unbelievable true story of a championship youth curling team next fall? I understand the appeal of Secretariat, I do. I just don't think that it will translate well without seeming pandering. It's just like The Blind Side except instead of a black kid, it's a horse. (Which kind of puts The Blind Side in a whole new perspective.) It's just like Rocky, except with a literal stallion instead of an Italian one. It's just like Seabiscuit except... no, it's exactly like Seabiscuit. Put in this light, I think my fears and doubts coming into the theater are justified.

REALITY: Secretariat the movie and Secretariat the horse have a lot in common. Overweight and bred for speed as opposed to stamina, the horse never should have won the races he did and still hold the Kentucky Derby record; it simply defies logic. In a similar vein, coming from a line of lackluster sports films, and boasting "John Malkovich wears funny pants" as a selling point, the fact that Secretariat is a pretty decent film is equally brain-breaking.

Diane Lane plays Penny Chenery, a housewife who takes up her family's horse-breeding farm with her mother deceased and her father slipping into dementia. With little to no support from her husband Jack (Dylan Walsh) and brother Hollis (still-not-famous Dylan Baker), she enters into a breeding deal with Ogden Phipps (James Cromwell), ending in a coin toss which Penny loses. As a result, Penny is allowed to keep the foal who later becomes the greatest racehorse ever. The story plays along exactly as you'd expect, there's a great deal of "Women can't do that!" and feminine spunkiness from our heroine, and it's enough to pass the whole film off as generic. 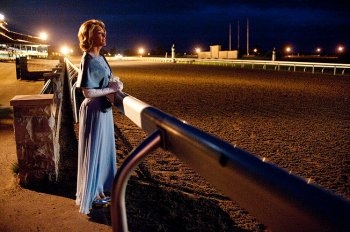 You're late, Diane. The race finished hours ago. Did you not notice there were no other people around?But "generic" is not necessarily a bad quality in a film, especially one designed for Secretariat's audience, the same audience that paid for Sandra Bullock's Oscar. Good performances and strong pacing can carry a generic movie, and they do in this case. The two leads, Lane and Malkovich, carry the film to heights that the script doesn't seem worthy of. Malkovich plays Lucien Laurin, an eccentric horse trainer with a record of failures, and he actually seems to be having fun on screen, something we haven't seen from him in years. Diane Lane pulls off the tired stubborn spunky female lead with minimal cheesiness, and has enough charisma to almost make you take the side of a character who is making illogical decisions which will probably bankrupt her family.

Here's one eye-rolling moment in a film that has many; we are constantly told that what Penny is doing is impossible, and yet she gets angry and defensive when people don't believe in her. It's not their fault, Penny, you're the only one who seems to know that you're in a Disney film.

There's also only one token black person in the film, a groom named Eddie Sweat (Nelsan Ellis) who can supposedly hear what horses are thinking. Not only does this approach Bagger Vance-levels of Magic Negro stupidity, but also his one character trait is taken away toward the end when it's shown that, for Secretariat at least, Penny can do it too. Penny can do basically anything in this film, except have a decent family life. For a film which prides itself on the power of the housewife, any and all domestic scenes are incredibly boring, at least in comparison to the horse-training. Penny's eldest daughter Kate (Amanda Michalka), for example, is a blossoming hippie and war protester, who seems to only exist to remind us that this movie is in fact, set in the early '70s. During one of her scant scenes, I expected Forrest Gump to walk in and apologize for getting in a fight. It's stereotypical and pointless, but so is a lot of the script. 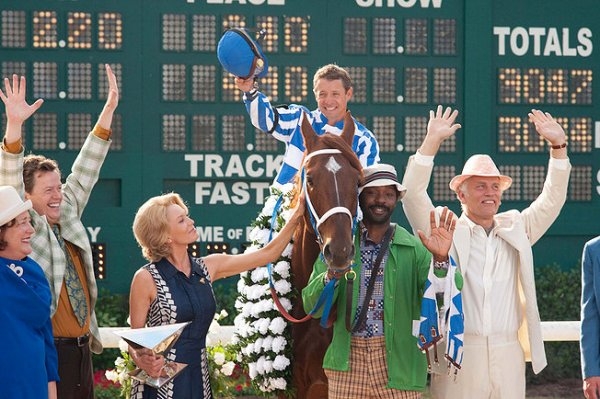 In this very busy image, the one thing that constantly draws my eye is Malkovich's teeth. What's going on there, exactly?

Yet despite that long list of complaints, once that horse hits the dirt, none of it seems to matter. We've spent enough time with these characters that somehow we've grown to like them, and even though we already know what's going to happen, we want to see how it's shown. Director Randall Wallace manages to pack a lot of tension into a very short period of time during the film's third act, similar to the tension of an actual horse race. The race scenes make excellent use of theater sound systems, with applauding crowds and clapping hooves ringing in the audience's ear. This is the big payoff, and it actually works. If a film can take a story where the audience knows the outcome beforehand, and still have even a sliver of doubt pop into anyone's mind, it has done its job well. There's also a brief bit where shots of Secretariat and a rival horse are spliced to make the two horses seem like they are angry at each other. Somehow, this doesn't look as ridiculous on screen as it sounds in that sentence.

That's basically what can be said about Secretariat. It could have been outrageously overdone and cliche, but on the whole it isn't. Lines about Penny's leading two lives could've been turned into overly dramatic scenes, but they're left as realistic side remarks, and are therefore more powerful. There's a lot to be said for a film that knows its audience; Secretariat is one such film. This is not a movie designed for film snobs. This is a movie designed for your mom, particularly if your mom is a church-going housewife, and that's okay. At times the script feels like that of a religious DVD movie, but if you can grit your teeth and get through the part where Penny is inspired while washing the horse to the tune of Oh, Happy Day, there's enough meat on these bones to appease the non-mothers in the crowd.

MINORITY REPORT: When I was in Burma, fighting the Egyptian Luftwaffe, I ate many horses to survive. Unfortunately, after our successful military excursion, I was the only one whose horse was left alive. I assured those men, promised them absolutely, that I would return with fresh horses to bring them back to civilisation. Having given those men my word, I rode for many days until I finally found a small island of beauty in that sea of desolation. Having been saved, I returned home and to this day I occasionally wonder how those boys got on in the desert without horses. I could have gone back for them, but horses are expensive and you can jolly well bugger that for a lark. -Montague "Legally Sane" Smythe