Horatio Poindexter and the Evil Satanic Rituals of Corruptive Behaviour

PONTIFICATIONS: In my youth, I happened upon a tome of some curious historical value. The cover of this particular volume was adorned with no text or other clue as to its content, beyond a glowing red pentagram. Being peculiar in my youth, I was enamoured with the mystery of the object I had found and was greatly disappointed to find all the pages within were completely blank.

After a scuffle with a gang of local hoodlums (who promptly came to a tragically untimely end, due to an entirely unrelated knife-based incident), I discovered that the mysterious book I had acquired needed the application of human blood (i tried several cats previously and had no luck) in order to reveal the secrets within. It was within the cryptic message of that ancient grimoire that I was to learn the true nature of magick, which is magic with a K.

Oh! The wonders I did bring forth into this world: darkness, flames, demonic hordes. I was a fool! I meddled with forces beyond my own comprehension and wrought nothing but destruction and death and Hitler. I cast that filthy book into a bottomless pit of thick, writhing mud and thought nothing more of the incident until the year of 1997, when a "novel" known as Harry Potter and the Philosopher's Stone was first published in this green and misty land. Stories of children everywhere shunning the light of the real world and escaping into a realm of pure fantasy and evil deeds shook my soul. Could the evil I had unwittingly freed into the world so many years previously really be back in such an innocuous disguise?

It would seem that a growing obsession amongst impressionable youths with flying broomsticks and magic wands was only the beginning of the problem. Fortunately, I had all but forgotten the issue until a string of mysterious disappearances of young children in my local area and the sudden arrival of an unholy stench emanating from my wine cellar gave me pause for thought, Perhaps these two completely unconnected things could both be clues to a common truth? That common truth being the arrival of demonic forces into the world once more. Only by systematically conducting witch trials in the traditional manner, until I had exhausted the entire West Riding of Yorkshire in my unending search, was I able to ascertain that the source of the demonic force must be coming from somewhere else and that the smell in my home was to be ignored by meddling police officers who would never find me anyway, the fools!

It was not until I found a singed, yet well-thumbed, copy of the offending book that my search had any real direction. J.K. Rowling was the name of the author! Of course! The lead singer and crazy dancing fool from popular music group Jamiroquai was the culprit of these barbaric witch-trial murders that had gripped the north and he was going to have to answer to me for all the madness he has wreaked. 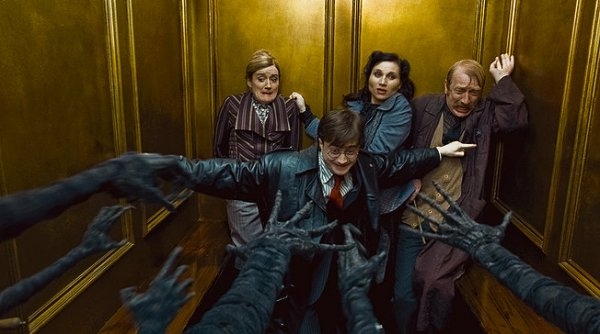 We asked you nicely to hold the lift you dick!

Unfortunately, a lot of the intervening years are a complete blur to me, though I am sure that I spent a large chunk of them in some manner of dungeon. Whether I was a captive or an operator of this dungeon is beyond my memory, but I will never forget that same lurid smell that once filled my home and sent me looking for answers that filled every inch of that prison.

Many years passed and it was not until I saw my suspect J.K. acting a tit in front of an increasingly balding Jerome Carlsbad on the once entertaining televisual exhibition High Gears that I was spurred once more into action. With an ice-pick that I had left over from an arctic expedition in hand, I travelled to London via an overnight train (which caused some confusion and delays when many of the passengers who boarded never seemed to arrive at their destinations) and sought my target with wrathful intent.

Seven days passed on the muggy streets of London with no sign of my intended quarry. It seems the wily, hot-footed dancer was able to board an automobile and make good his escape via vehicular means. Having lived on the streets in that fine city during this brief period, I had become accustomed to the taste of rats and semen, but was forced to make my exit anyway when an astonishingly high amount of bodies had been found in the local sewers.

I forget the point of this. Something to do with the corruption of youth? Serves them right anyway, the bastards. They don't know they're born these days, the bloody worthless bastards! I'll kill them all, bastards! I WILL MAKE THE STREETS RUN RED WITH THE BLOOD OF THE INNOCENT AND I WILL NOT REST UNTIL MY TASK IS COMPLETE, WHATEVER IT WAS!