Harry Potter and the Adjective Noun

DISCOVERY: You know how sometimes people say you never know what you'll find in your own backyard? Sometimes it just means interesting things aren't so far away. Other times, it literally means that if you dig up your backyard long enough, you'll find some really cool shit. I drew the short straw last week, so I wound up having to hold down the fort while everyone else went out scavenging for bags of old potato chips and scrap metal for building worker robots (fun fact: the robots never work, so we just use them as scarecrows).

Anyway, I got bored the other day, so I started digging around in the backyard of the Compound hoping to find a time capsule or something. Instead, I dug up a plastic box made to look like a suitcase. Man, you people sure did make some stupid looking crap.

The side of the box reads: "Harry Potter DVD Collection: Parts 1 - 7"

ANALYSIS: After doing a marathon of all four films, I'm feeling a bit conflicted...

Why only four, you ask? If I'm remembering my future history correctly, sometime in 2039, Congress decided to outlaw the concept of even numbers. So for seven years, the country set about getting rid of everything with a 2, 8, 36, etc. Minneapolis and St. Paul battled it out over which Twin City got to stay. Neither survived. Anyway, the ban was lifted in 2046 because the world was about to end, so I guess Congress decided "What the Hell, repeal everything!" Universal health care, anti-smoking laws, even numbers, the repealing of prohibition ... all gone. The point is, this box must have come from that seven-year period where even numbers were illegal. So no Harry Potter 2, 4 or 6. I'm sure at some point in history, these movies actually existed, but not anymore. They got clever when they named the eighth film Part 7-2. I guess someone thought 7-2 equaled 5.

Just as well, I guess. The series makes perfect sense without those films, as it turns out.

It's a rare phenomenon among movie franchises, but each Harry Potter film is better in retrospect than it is in the actual viewing. I'll be honest, it was hard finding the time to watch all these, what with the nightly badgerback attacks and raids from Doctor Maadniss (fuck you, Maadniss, you only have a PhD because I sold it to you!). But whenever I did find the time to watch the next installment, I'd find myself looking back on the previous one with a sense of nostalgia. "My, how our heroes have grown!" or "Oh, to be back in the halcyon days of Quidditch matches..." Then in watching the next, I'd always find myself wishing the movie would just get the fuck on with it already.

Harry Potter and the Sorcerer's Stone is probably the only film in the entire series that you could reasonably watch on its own. It's the only one with a clear-cut beginning, middle and end, which is something the rest of the franchise somehow forgot how to do. All the others are either beginning-middle-middle (3), middle-middle-beginning (5), or middle-end-end (7). This makes for some weird continuity, but it's pretty easy to infer that parts two, four and six are all middle-act material. But back to the first one.

Sorcerer's Stone begins the story of Harry Potter (Daniel Radcliffe), an orphan whose parents were murdered by evil wizard Voldemort. When he turns 11, Harry is invited to attend Hogwarts, a prep school for wizards where everybody dresses like Doctor Who. He jumps at the chance, because his aunt and uncle are horrible people who think magic is stupid. During his first year, Harry meets future sidekicks Ron (Rupert Grint) and Hermione (Emma Watson), becomes the school's star flying lacrosse player, and stops a bald man with two faces from stealing a magical stone. If you wanted, you could end the series here, you could. It's a big fantasy production with some fittingly goofy special effects and an overall stellar cast. On top of that, Everybody lives happily ever after except for the people that Harry set on fire. It makes me yearn for the days when literal two-faces weren't a creepy, everyday sight.

Things take a turn for the strange in Harry Potter and the Prisoner of Azkaban, as the titular prisoner (Gary Oldman) escapes and makes his way to Hogwarts to either kill or not kill Harry. The plot to this one isn't that easy to sum up briefly, but there are plenty of little wrinkles in the plot to keep things moving. Professor Lupin, the Defense Against the Dark Arts teacher, turns out to be a werewolf, Ron's pet rat turns out to be an asshole, and Hermione turns out to be a time-traveler. As far as the grand scheme of the series is concerned, Azkaban is by far the most interesting film, if only by virtue of the fact that the movie actually has a decent internal plot. It's not as self-contained as the first film, but at least it doesn't bog itself down in continuity the way the rest of the series does. 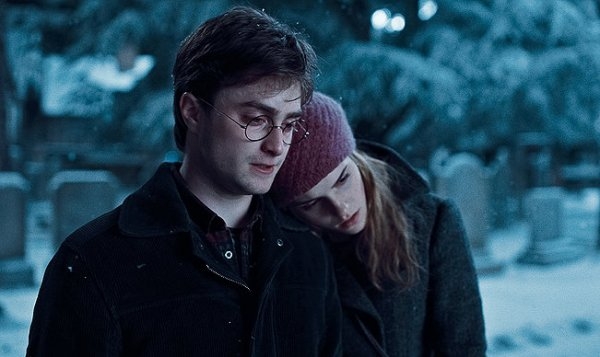 Harry, I'm bored and it's cold. How much longer do we have to stay here? I don't even remember this guy. He'll still be dead tomorrow, let's get a sandwich. Harry, why do you look so angry?

Speaking of which, that's probably the biggest problem with Harry Potter and the Order of the Phoenix. If you had to sum up the plot in one sentence, it would be "Harry Potter and friends are about to start fighting the bad guys." The entire plot of this film is predicated on the notion that we're going to see things happen in the next one (and judging from what happens in part 7, I can only guess that absolutely nothing happened in part 6). In this one, Voldemort (Ralph Fiennes) has amassed a small army of wizards, witches and douchebags to his cause, while Harry and friends attempt to train themselves in preparation for the coming douchebag horde. There's also a snooty, oppressive new headmaster for the students to contend with, as well as a search for a prophecy concerning Harry and Voldemort. There's the odd action sequence here and there, but on the whole, Order of the Phoenix really doesn't deliver any kind of finality or conclusion the way parts one or three do. That said, for all the boring non-plot turns in this film, while watching Deathly Hallows, I kept thinking back on everything set up in this film. Maybe it worked better than I'd originally thought.

Now, I won't spend too much time talking about Harry Potter and the Deathly Hallows: Part 1, because I understand it's already being reviewed elsewhere in this week's column. What Phoenix lacks in finality, Deathly Hallows 1 equals it, but what the former lacks in overall narrative, the latter delivers in spades. Hours and hours worth of setup finally starts paying off, with searches for magical swords and lockets, the establishment of Voldemort's evil regime, and a depressing camping trip reminiscent of my own excursions into the monster swamps. Deathly Hallows 1 nails the bleak tone of the story perfectly, and even though it moves too quickly at times, it finally gets the balance between plot and character development just right.

Much to my surprise, the Harry Potter series works rather well as a fantasy apocalypse narrative. It's kinda fascinating watching this elaborately established world slowly crumble to pieces over the course of 12 hours or so. It's kinda fun watching everything turn to shit when you live in a world that's long since turned. Some of the middle passages are completely unnecessary, as it's all too easy to gather what happened in the interim from the other films. That said, there's a natural flow between the odd numbered films; you Harry Potter nerds ought to try watching the series the way I did sometime. You might find that it's actually easier to watch. And probably way more enjoyable.