REALITY: Well, I gotta say, I did not expect "arm-amputation movies" to become a genre. I'm wondering how many more famous one-armed people there are to make a movie of. (Maybe that guy from Def Leppard?) Also, my "church-group" senses tell me this is one of those "Not a church movie, but totally a church movie" movies, like Fireproof, or Tyler Perry's Entire Career. If this is true, it's a giant step for church movies, because it's a movie with actors people still care about, like Dennis Quaid and Helen Hu...oh, wait no. Like Dennis Quaid and Kevin Sor...um... hm. Like Dennis Quaid.

EXPECTATIONS: Comedian Mike Birbiglia has a joke where he talks about how he doesn't like Christian music, because it starts off like any other rock ballad, then blindsides you with "CHRIST IS GOD" out of nowhere. Soul Surfer, distributed by religious production company Affirm films, has exactly the opposite issue. If it spent as much time being an Actual Movie as it does reminding you that it's a Christian Movie, it may have been a Decent Movie. As is, it is Barely A Movie. 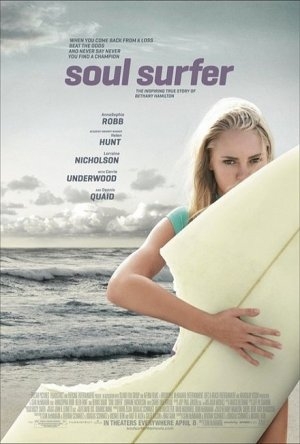 Is it just me who thinks that this poster is incredibly tasteless?Soul Surfer tells the story of surfer girl Bethany Hamilton, who was raised in the water by her surfer parents (Dennis Quaid and Helen Hunt) on some version of Hawaii that is populated exclusively by white people. (There is one girl who is slightly tan, but of course that makes her the town bitch. She's mostly just there to provide way more lesbian sexual tension than could possibly be intended.) When not singing in church for way too long or looking directly at the camera and saying how wonderful home schooling is, Bethany likes surfing, talking about surfing, surfing in flashbacks, making voice-overs about surfing, and clapping her hands. She will be unable to do one of those by the end of the film.

While Bethany is out surfing with her friend Alana (Lorraine "Yes, I am Jack's daughter" Nicholson), a shark comes up out of nowhere and takes off her freaking arm. This should be horrifying, but because of its sudden and low-budget nature, it's one of the funniest things I've seen in theaters this year. The shark basically pops up, yells "'SUP, BITCHES! GOT YO' ARM!" and swims off. It took you longer to read this sentence than it does for the shark to do his business.

Look, I'm not going to fault a movie for being made by Christians for Christians. That's like faulting Scott Pilgrim for being made for nerds, or Eat Pray Love for being made for horrible people. I won't fault a movie for having an audience. That said, there are certain liberties a secular film can take that a religious one can not, ones that would make Soul Surfer a much better movie. For example, one can have their main character get angry at God for sending a shark to eat their arm. If you showed me a movie about a person raised in church who loses their faith after a traumatic experience, then gains it back again, you might be showing me an interesting movie. Instead, Bethany receives exactly two lines of slight doubt, both of which are handled like this:

"Why did this happen to me?"

"Oh, okay, I needed to stop cracking my knuckles anyway."

You can also have some more character arc when you aren't trying so hard to have an inspirational role model. Bethany literally has no development. Because this is a religious production, there's nothing for her to learn. She's picture-perfect squeaky clean with two arms, and then she's picture-perfect squeaky clean with one. Oh, wait, I suppose there is the fact that she was attacked while not attending a mission trip with her church so she could train with her sponsors for her professional surfing career. That's right kids, the message here is: Always go to church, or a shark will bite your arm off.

Also, for some hamfisted reason that seems kind of tasteless now, Bethany stops the movie in the middle so she can travel to Thailand and help tsunami victims over there through the power of surfing. Here's the issue here: By implying in your film that God made Bethany lose her arm so she could learn what really matters in life and help people in Thailand, you are also implying that the converse is also true. You are implying that God killed thousands of people with a tidal wave because one girl didn't go on a youth group trip. After taking her arm.

You know what? Fuck this. I'm done.

127 Hours tells the true story of mountain climber/adventurer Aron Ralston (James Franco), who gets his arm trapped under a rock in a canyon while exploring. After spending five days in this position, Ralston removes his arm with a dull pocketkife in a prolonged sequence that is gory, visceral, hard to watch, and not side-splittingly hilarious in the slightest.

What's brilliant about 127 Hours is that it's unafraid to show the darker side of its protagonist. Aron is kind of a jerk, and he can't miss any commitments to mission trips, because he doesn't really interact with anyone. And this is okay. It's okay for a character to start out one way and then become another. There can be more development than having one of something there used to be two of.

Overall, 127 Hours is inspirational and entertaining. Honestly, the only complaint I have was the shock twist at the end, when a shark appears in the middle of the desert, yells "HEY SPIDER-MAN DUDE!" and bites off Ralston's other arm. It was funny, sure, but it didn't really fit the tone of the rest of the film.

In lieu of normal ratings, I have decided to list my reaction to each actor as their name appeared on the screen during the opening credits.

MINORITY REPORT: You saw this because you had to watch something inoffensive so you'd stop courting controversy. I guess that didn't work out so well. - Ian "ProfessorClumsy" Maddison