EXPECTATIONS: Back in 2008, the world suffered one of the most incomprehensible financial meltdowns in history. This wound up lighting a fire under a lot of people's asses, fueled by fear and the smell of burning cash. So I at least kind of understood when I heard that someone wanted to adapt Ayn Rand's Atlas Shrugged for the big screen. Of course, it took them three years; all the attached A-list talent left the project; the producers lost most of their funding; and they're only marketing this as the first part of a trilogy in order to keep the movie rights. Not only does this film look a day late and a dollar short, but also it looks like a cheap, unintelligible bore.

REALITY: Calling Atlas Shrugged: Part 1 a train wreck would be doing a disservice to how fascinating train wrecks tend to be. It's already a story better suited to television, where people can change the channel during all the boring parts, but by dumbing down Ayn Rand's philosophy for general audiences, we're somehow still left with the first part of a trilogy that already feels too long. While not an absolute travesty of film storytelling, Atlas Shrugged (let's face it, there'll never be a Part 2) plays more like a children's guide to business than an honest adaptation of Rand's book. 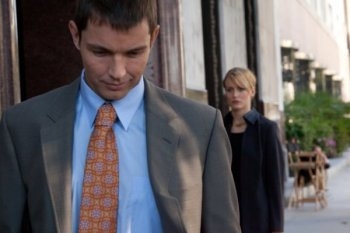 That is so boring.The film opens in 2016, a future in which the global economy is tanking, gasoline costs $37 per gallon and the Middle East is in complete disarray. With railroads being the only viable means of transportation, the government is going crazy trying to regulate all the railroad companies that are suddenly getting rich off such an economy. Enter Dagny Taggart (Taylor Schilling), an emotionless robot of a businesswoman and the co-owner of Taggart Transportation. Together with steel magnate Henry Rearden (Grant Bowler), Taggart is planning on expanding her business with a new rail line made from a new metal that Rearden claims is stronger and cheaper than anything on the market.

This partnership is driving senators (Jon Polito, Michael Lerner) insane, because how dare two successful companies cooperate in order to increase their profits? In response, Congress passes all kinds of evil legislation in an attempt to regulate how much power entrepreneurs like Taggart and Rearden can wield over their industries. Meanwhile, businessmen all over the country are disappearing as we witness each of them encounter a mysterious film-noir boogeyman who offers them freedom and prosperity from all the horrible moochers of the modern world.

Still awake after all that?

Now you may be asking "So where are all the wizards or dragons or spaceships? Isn't this supposed to be some kind of science-fiction trilogy?" Technically, yes. Atlas Shrugged is science fiction in the sense that Rearden invents something that could change the world. That something happens to be railroad tracks, but there it is. Thing is, that's not enough to hang an entire film trilogy upon. Harry Potter and Star Wars can do it because at least Harry Potter and Luke Skywalker are young hero characters who go on journeys to learn how to explode villains and save the world. Atlas Shrugged is just a story about businessmen who want to bring the world to its knees because "Fuck 'em."

Even ignoring all the offensive dumbing down of Ayn Rand's sometimes-offensive world view, Atlas Shrugged is just plain bad. The film only cost $15 million, and boy does it show. Wooden acting, poor cinematography, and some laughable CGI dot the film like rust spots on a dumb metaphor. For some reason, all of Rearden's new railroad tracks are polished blue. I guess they needed to differentiate the new tracks from the old tracks so viewers wouldn't get confused, but that doesn't explain the handful of scenes featuring construction crews laying down the new track. 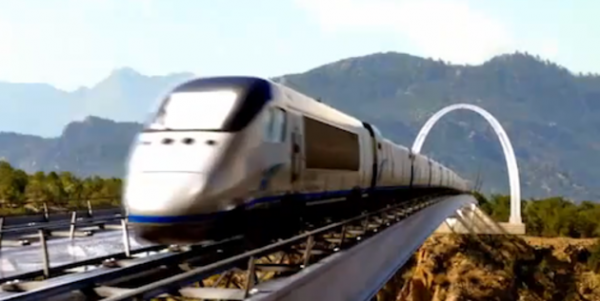 Blue CGI train tracks are really the least of this film's problems, though. The biggest sin against Atlas Shrugged is that most of it is mind-numbingly boring. Long stretches of the film feature characters arguing over the sturdiness of metal alloys and legislation preventing monopolies and oligarchuuuuughhhh...Would somebody just kill someone or do something already? This is one instance where yes, I'm asking for needless violence or explosions or anything to make this film more interesting. Schilling and Bowler do an okay job at playing stoic entrepreneurs, but you know what's not exciting? Stoic entrepreneurs. This is why caricatures of businessmen who accidentally succeed in the stock market are infinitely more interesting than "realistic" portrayals of coldhearted capitalists. I would've loved to have seen a character like Arthur Bach deal with a situation like the one in Atlas Shrugged. That would generate some interesting tension, or we'd at least get to see Russell Brand riding on top of a train.

I'm not really insulted by Atlas Shrugged on any kind of political level. It somehow manages to turn Ayn Rand's 1000-plus page screed against Marxism into a pop-up book about the benefits of doing whatever you want, but all the political yammering in the world can't stop this movie from being dull. The final ten minutes or so attempt to hook the audience and hint at what will happen in the (never-to-be-made) sequel, but the discovery of a new engine powered by air and magnets, a forest fire and the most hilarious "NOOO!" this side of Revenge of the Sith aren't enough to make me come back for Part 2. Do yourself a favor and just go watch Watchmen again.