EXPECTATIONS: Of course we're all waiting with baited breath for the third in Edgar Wright's so-called "Cornetto trilogy." With Shaun of the Dead and Hot Fuzz being heralded as the gold standard for modern British film comedy, it's hard to not get excited by The World's End. That said, Wright's last film Scott Pilgrim Versus the World left me (and audiences at large) absolutely cold and uninspired, while it played well to a certain demographic. I certainly don't think The World's End is going to be anything like Scott Pilgrim, in quality or style, but there's always that nagging fear that Wright's best work is already behind him. Who am I kidding? This is going to be great!

REALITY: While The World's End is definitely the weakest of the "Cornetto trilogy," I feel that saying such a thing is redundant based purely on the ludicrously high standard that has been set by the previous works. The World's End suffers slightly from a weird sense of pacing, but it's really a very good science fiction story about the human condition that dabbles in the depressing and the amusing in equal measure. 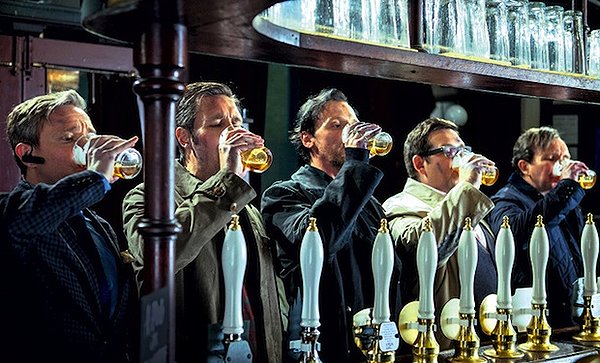 Here's to getting drunk every day for the rest of your life.


In his alcoholics' support group, Gary King (Simon Pegg) is known to recount the tale of what he claims to be the greatest night of his life, wherein he and his teenaged peers attempted to drink a pint in every pub in his home village of Newton Aycliffe. Always feeling his life would get back on track if he could only finish what he started, he one day decides to reunite the lads to give it another crack. So he, Andy Knightley (Nick Frost), Steven Prince (Paddy Considine), Oliver Chamberlain (Martin Freeman), and Peter Page (Eddie Marsan) take a weekend off and return to Newton Aycliffe to get blitzed.

Of course, that's all well and good when you're young enough to handle it, but when you're staring down forty with your entire adult life lost to alcoholism and all your friends now grown up and settled down, it soon becomes apparent just how pathetic the whole thing is, especially when you find yourself beset by an army of bodysnatching robots hell-bent on enforcing homogeneity on the town and its few remaining human denizens.

Balancing the mundanity of a night out in a small town with the high concept sci-fi of an alien civilisation trying to further their own goals by introducing their technology and ideals to our world without us noticing. The point is that mundanity is itself a construct of capitalist monopolies which the human spirit naturally reviles yet feels powerless to oppose. What The World's End states, perhaps unsubtly, is that in order to be truly free, humanity would have to shake off the confines of a lot of modern technology. 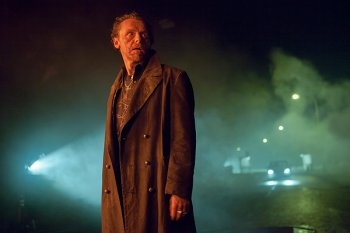 Aw, bless him. He doesn't know where his next drink is coming from.

It's an interesting idea, but not one that I necessarily agree with. After all, isn't the greatest feat of human endeavour the idea of mass communication and enlightenment? That we can be educated by people who died centuries past, make friends in places we've never been and become world-famous film critics (right?) from the comfort of our own homes. The message of The World's End is a tossup between humanity being happier generally and maybe it's just middle-aged people being miserly about the modern world. Nothing is how it used to be and the youth of today need to be led back in the right direction.

The wider view of this film is much less interesting than its more intimate and personal messages. Gary King, as he is portrayed by Simon Pegg, is my late uncle. In different circumstances he would be me. We all know a Gary King. A leather-jacket-clad alcoholic who presents a deliberate mask of arrested development and self-infantilisation to the world. Stuck in a time where they (we) seem to recall having no problems and so they develop a harmful coping mechanism that keeps them suspended in that moment. For Gary it's his pub crawl around Newton Aycliffe, shagging Oliver's sister Sam (Rosamund Pike) in a disabled toilet, punching a hole in a wall and getting barred and finally leaving most of his friends behind to the effects of extreme inebriation only to never finish what he set out to do.

Returning to the town with the same group of friends highlights some very clear things. Firstly, everyone else has moved on and grown up separate to him and, secondly, that he has ultimately been abandoned by them, punished for his behaviour while they all deal with their own problems. This is perfectly understandable, of course, everyone has their own shit to deal with. For Gary, it is his attempt to not only rekindle the friendship but reclaim his position as the ringleader that he feels will ultimately cure him of his afflictions. In truth, it is the support of his only real friends that he needs, and it takes them a long time to fully realise that. Even Andy, himself a recovering alcoholic, goes along with Gary's plans and gets drunk because "Fuck it, nobody has any better ideas." We all know a Gary King, and he needs our help. I imagine my uncle would have prefered the ending to this film over the ending he ultimately got.

Where The World's End falls a little short is in its comedic focus. There are very few actual jokes in the script and a lot of them fall flat, like a running gag about the body snatchers not being robots, because "robot" means "slave." All of the films best laughs come from its more subtle moments. There seems little in the way of actual parody here too, where Shaun of the Dead used horror tropes and Hot Fuzz used British crime thrillers and Hollywood action films as its template, The World's End seems lost for influences from which to draw. There are hints of They Live and, of course, Invasion of the Bodysnatchers in the story, but little of their style. With bizarre wrestling-inspired fight scenes and lengthy monologues taking up so much of the film's running time, it is understandable that fans of the previous two films may be left disappointed. But for its occasionally messy, unfocused and baggily-paced problems, there's that beacon of positivity that makes it shine.