REALITY: Kick-Ass 2 is the angriest boring movie you could ever hope to see. Or, if you prefer, the most boring angry movie. It is the cinematic equivalent of a child screaming in your face about nothing, but you've been so heavily sedated that you just barely notice. Everything that its predecessor did right, and there were a few things, has been replaced by mean-spiritedness in the sequel and everything that Kick-Ass got wrong is even worse here. 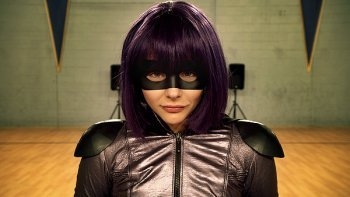 You're supposed to pretend that she's only fifteen. Just play along.

So Dave Lizewski (Aaron Taylor-Johnson) and Mindy Macready (Chloë Grace Moretz) have settled back into a state of relative normality after their violent exploits in the previous film. Dave goes to high school while Mindy plays truant to train her dead dad's secret dojo. After a few months of inactivity start to wear thin, Dave starts joining Mindy in training and eventually the pair return to their costumed crime fighting antics as Kick-Ass and Hit Girl respectively. Perfectly timed is Chris D'Amico (Christopher Mintz-Plasse), still reeling from the death of his own father, accidentally killing his mother and realising his destiny to become the world's first supervillain, "The Motherfucker," bent on getting his revenge on Kick-Ass by any means necessary.

As far as plots go, it's standard sequel fare. Family member of the original villain wants revenge on hero for killing him at the end of the first film, hero returns to familiar action, the stakes are raised, some sacrifice is made along the way and ultimately it all ends in a nice, predictable denouement. Kick-Ass 2, for wearing the mask of supposed subversion and parody, is completely faithful to the formula.

What makes it different, marginally so, is that everything is delivered with some misguided anger. Who is this film angry at? We are to assume that it is comic book nerds, clamouring for their formulaic drivel. But, are you really sticking it to them by delivering exactly that? Perhaps it's the very nature of the comic-to-movie adaptation at which the film is angry? So why even do one? Well, that would be out of the question, obviously. With everyone complaining incessantly about Kick-Ass comic author Mark Millar's attitudes to women, I can't help but wonder just what it is about the source material that makes it so impossible to not adapt to the big screen. In truth, for all of Kick-Ass 2's posturing about the whininess of comic book fans, it is women that it is ultimately the most angry at, but it never really makes it clear why.


After a heartwarming scene in which Mindy promises her foster father (Morris Chestnut) that she will never put on the costume and murder street thugs again, she starts to actually attend high school and somehow falls in with the "popular girls," led by the stereotypically named Brooke (Claudia Lee). These popular girls teach her how to do girly things like become aroused looking at boy bands, wear makeup, hypersexualise her body and be humiliated by men in the woods. It's okay that the film takes a stance against these ideas, but I can't understand why it wants to blame women for this, like they've put themselves into this position. The attitude of Kick-Ass 2 is that there's a certain type of woman, the good ones, who are really more like men. "Oh, why are women so icky? Why can't they be more like men?" comes this film's confused cry.

Unfortunately, the whole film reads like the angry revenge fantasy of a sexually frustrated manchild who had a bad high school experience. The nerdy "tomboyish" girl gives these popular feminine girls their comeuppance by using a phallic object that causes sudden evacuation of the bowels. Essentially a humiliation at the hands of her acquired maleness -- a powerful phallus and a total bodily control. Those silly women, they need to learn to be more like men. It's all their own fault. Silly women. Picking on me in high school. We can't all look like the guys in the boy bands, you know? You should be more like men. Men aren't shallow or silly. A good woman should be more like a man, and yet wear slutty clothes and be forthcoming with their sexualities ... like Night Bitch.

My head is buried in my hands right now. Not just because that pretense takes a lot out of me, but also because I have reminded myself that Kick-Ass 2 has a character named Night Bitch. Night Bitch is the subject of the film's most troubling scene, in which The Motherfucker attempts to rape her (for the crime of having sex with our hero) but cannot achieve an erection. This is played for laughs. I've seen people argue that we, the audience, are supposed to feel relieved that he cannot get an erection and that somehow the brutal beating that takes place instead is a much more pleasing outcome for all involved. That's a problem. Aren't therapists the world over comforting rape victims (perhaps at this very minute) with the reassurance that rape is an act of violence, not sex? By turning the intended rape scene into a joke about erectile dysfunction, it has reversed that stance. Ha ha ha, he can't get it up.

All of this anger, misplaced, and yet the film manages to be interminably dull behind it all. None of its jokes land, all of its action sequences fall flat and none of the character moments carry any weight. Kick-Ass 2 is not worth your time, even if you really hate women and enjoy other people's misplaced anger.

MINORITY REPORT: Given the increasingly diminishing maturity of this franchise, and that the formula for character names is just 'say a dirty word,' I will be incredibly disappointed if the villain in Kick-Ass 3 isn't just Dick Butt. - Martin R. "Vargo" Schneider