Transformers; The Tree of Life

The Tree of Life

EXPECTATIONS: Any time Terrence Malick climbs out from under that rock of his and makes a film, we here in the movie nerd community wait with bated breath for a glimpse of it. He is to cinema what Punxsutawney Phil is to weather: If Terrence Malick comes out of his hole and isn't startled by the media, his next film won't be too far off. For serious, though, there has been some very strong buzz surrounding The Tree of Life, so I'm excited to see what Malick has up his sleeve. I wouldn't call myself a fan, but at this point in the summer, I welcome any chance to see something that isn't an orgy of CGI explosions. 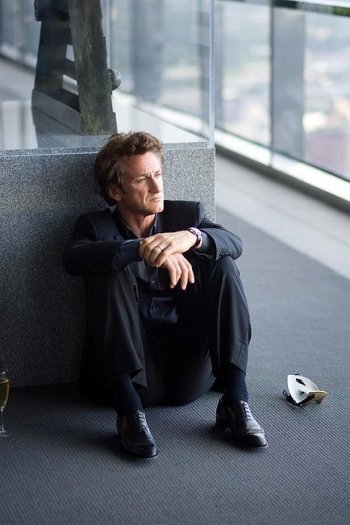 Leave me alone, I'm over-acting.REALITY: Tree of Life is the most compelling metaphor for human existence you're likely to see all year. Even more interesting than Rango.

Despite being a relatively simple story of one suburban Texas family circa 1950, Tree of Life encompasses all of existence, from the first burst of light in the cosmos to the possibility of an afterlife. Thematically, the scope of the film couldn't possibly be larger, but on a narrative scale, Tree of Life follows a character named Jack O'Brien from his birth to his strained childhood relationship with his father (Brad Pitt) to his meaningless existence as an adult (Sean Penn). While his brothers seem to have found their place in the world, Jack feels directionless and full of angst. He resents his father imposing such strict discipline on his sons, while we see an adult Jack in constant mourning for his long-dead brothers, boys who perhaps could have grown up to do great things with their lives.

The film bounces about to different points in Jack's life on a whim, almost as though Malick has no particular narrative in mind at all. This would be true if not for the fact that the film presents itself more as a series of memories than as a single narrative. Have you ever reminisced about accidentally shooting your brother with a BB gun, and then ten minutes later remembered going to Quiznos yesterday on your lunch break? That's the kind of structure Terrence Malick is playing with here. It's not a Point A-to-Point B kind of film; it's more about combining all the little moments in between.

That's not to say that it always works. Occasionally the film will jump forward to a scene featuring Sean Penn, follow him as he stumbles about and emotes in an office park, and then jump back to Jack's childhood like that was supposed to have been enlightening for us. These portions are meant to illustrate just what a shiftless, depressing person Jack has become, but they break the flow of the film and appear to exist only in order to get Sean Penn's name on the poster.

It wouldn't be wrong to label Tree of Life an art film, though that term implies more pretension than what we see here. "Art films" are directionless affairs claiming to be about high-minded issues or themes, when really they're just an excuse to put naked women in front of the camera reading the Federalist Papers while "Gimme Shelter" plays at half-speed in the background. Okay, not always, but usually. 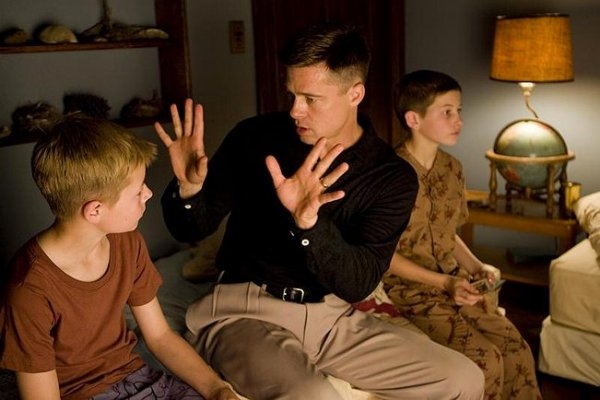 No son of mine is gonna grow up not knowing how to do jazz hands properly.

This film, on the other hand, merely tinkers with a non-linear story. Malick never gives enough details about this family to lock us into any one specific timeline, so when we see the family attend the funeral of one of Jack's brothers, it's not so jarring when that brother makes an appearance later in the film (but earlier in the story).

On top of all of that, the story is set against the backdrop of the natural rhythms of life. After we're introduced to all the main characters, the film makes a hard stop and presents us with a fifteen-minute sequence in which we witness the birth of the cosmos. From the Big Bang, to the formation of the Earth, to the CGI shot of replicating DNA to end all CGI shots of replicating DNA, all finally culminating in the birth of our main character, Jack. In short, Malick is showing us all of the amazing things nature had to accomplish in order for me to be able to watch this film and then tell you about it. While these scenes are utterly arresting, and make me wish Malick would remake Koyaanisqatsi, they only barely tie into the larger theme of the film.

In fact, one of the very few missteps of The Tree of Life is that, thematically, the film is kind of a hodgepodge. On the one hand, Malick seems to be suggesting that it's easy to doubt the existence of God when life's key moments feel entirely arbitrary. On the other hand, he wants us to realize that life is too short to be wasting your time pondering the meaning of every little occurrence. As a young boy, Jack spends so much time being afraid of his father and unsure of himself that he forgets to forge his own personality, and winds up a lost and over-serious adult. I think that's a pretty good metaphor for Malick's direction with this film. He appears to be so wary of committing to a theme that he forgets that he eventually has to settle on one. The great thing about a film like this, though, is that you're free to interpret Malick's thematic waffling however you want. You get to look like a smartypants; he gets to look like a genius auteur; everybody wins.


The Tree of Life succeeds on the strength of Malick's script and choice in actors. Despite the film's length and meandering nature, few if any lines of dialogue are wasted. Many of the character moments in the film are built upon physical cues rather than words. As Jack's parents, Brad Pitt and Jessica Chastain build characters that are less like stereotypes and more like the ideal image of a mother and father. Like most things in the film, these two characters feel iconic. And while Sean Penn's involvement appears utterly contrived, the rest of the film works wonders on the audience's brain.

Even though I'm pretty sure this is the movie that they show to dying people at the end of Soylent Green, The Tree of Life is nevertheless a very beautifully shot film with an interesting perspective on life. See it for yourself and make up your own mind about its message, but be forewarned that you may well come away feeling very, very tiny.

MINORITY REPORT: So is this just Monty Python's The Meaning of Life with a straight face? - Ian "ProfessorClumsy" Maddison