REALITY: While Ian's busy reviewing movies ONLY GAY PEOPLE would like, I'm stuck reviewing a movie in which the opening musical number exhibits Stage Fright's greatest strength and greatest weakness: its attitude towards gay people. The alpha male theater geek gleefully sings "I'm gay, I'm gay/ but not in that way/ I sleep with women but musicals make me feel gay" before the stage manager jumps in with "I'm gay/ I'm actually gay/ I don't get hard when I see T&A/ could be my DNA or how I was raised/ but we don't distinguish here at Center Stage." The moment is simultaneously hilarious and problematic, opening up that tired "nature vs. nurture" argument in that last couplet, presumably because lyricists Jerome Sable and Eli Batalion needed a rhyme. I mean, I guess you could make the argument that, because Stage Fright might be set in the '80s (it's never really clear), the environmental explanation for homosexuality would still be up for debate, but this movie isn't above trafficking in easy stereotypes elsewhere. The stage manager is effeminate as they come, and the actor is quick to warn women not to touch his hair.

But gay people - those who like musicals, anyway - should find a lot to like in Stage Fright, which casts Rocky Horror Picture Show alumnus Meat Loaf as the owner of Center Stage, a summer camp for theater geeks whose production of The Haunting of the Opera (I'm assuming this is for copyright reasons) is plagued by a slasher villain who wears a kabuki mask and sings like Ozzy Osbourne, complete with a wailing electric guitar. Like many golden-age slasher flicks, this horror has its roots in the past: As children, camp cooks Camilla (Allie MacDonald, who once played Annie on Broadway) and Buddy Swanson (Douglas Smith) watched their mother (Minnie Driver) get murdered, presumably by the same killer, right after the curtains fell on a production of ... The Haunting of the Opera. 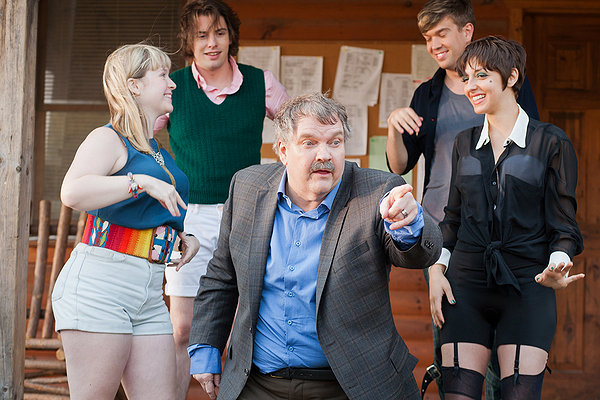 
There's also a precariously perched bucket of red paint, which means this horror/comedy/musical crams in references to Carrie, as well as Black Swan, The Texas Chainsaw Massacre (or maybe High Tension), Sleepaway Camp, Suspiria, Scream, West Side Story ... and then there's the obvious, The Phantom of the Opera. (I'm gonna give Stage Fright the benefit of the doubt and assume there's also a ton of references to other musicals, because that's a genre I'm weak in.) That's a lot of disparate influences to balance in 89 minutes, and they inform every aspect of the film, which begins with a title card that reads "The following is based on true events. While the names have been changed to respect the victims and families, the musical numbers will be performed exactly as they occurred." Surprisingly, Sable, who wrote the screenplay and directed, does an admirable job stitching these elements into a cohesive whole. That's not to say Stage Fright is a tonally coherent film, but "song-and-dance and guts-and-gore" flows better than you might expect. Stage Fright is a chirpy love letter to fans of both musicals and horror films, accentuated by its rare detours into unadulterated silliness.

Consider, for instance, a scene in which our killer holds a fearsomely sharp kitchen knife over his would-be victim's head and jams it between the strings of his electric guitar before hammering out a wicked solo. It's a goofy moment and it's metal as fuck, but by the time it arrives, it doesn't feel entirely out of place. And the conflict between the not-actually-gay actor and the actually-gay stage director pays off with an unexpectedly wonderful moment late in Stage Fright - a moment that only serves to mark time between murders. Because no homage to '80s cinema would be complete without a montage, Stage Fright swings for the fences with an obscenely long riff on the montage, which would be unpalatable if it didn't do so much to advance the plot, didn't play with the format of the montage itself and weren't punctuated by the image of a portly young set builder swinging his circular saw around like Leatherface.

Unfortunately, Stage Fright does show its cracks in the final minutes, as Sable finally violates his narrative's integrity with a cheat: The talking killer's flashback is incongruous with the film's prologue, presumably because revealing the slasher's identity so early in the film would rob Stage Fright of its giallo vibe. But I'm not convinced the mystery is an essential element here. I (correctly) guessed the killer's identity long before it was actually revealed, but its obviousness doesn't detract from a movie that's enjoyable for a lot of other reasons, the least of which is the shock of the final reveal ...or, y'know, the gay stereotypes, even if it's hard to be offended by a movie that never takes itself seriously and lovingly pokes fun at the theater geeks who would be interested in seeing a horror/comedy/musical starring Meat Loaf.

MINORITY REPORT: You can't spell Meat Loaf without TEAM. So let's huddle up, guys. We've got movies to review and no readers, so get out there and do whatever it is you do while I sleep. - One of the many motivational speeches made by Ian "Professor Clumsy" Maddison in the Current Releases office