EXPECTATIONS: All I know about this film is that it's a found footage story based on a ghost phenomenon known as the Brown Mountain Lights. If that's true, then this film practically takes place in my backyard. That's a ghost story I've been hearing since I was knee high to a grasshopper, or whatever dumb thing hillfolk call babies these days. I'm not sure how you do a found footage story about ghost lights and swamp gas, but with a title like Alien Abduction, there's just no telling what this film might have in store for us.

REALITY: One of the key issues endemic to found footage stories is coming up with any discernible reason for a character to record themselves running away from stuff for ninety minutes. It's not really an issue, since having a character say "We have to document this," is usually enough. Alien Abduction tries ever so hard to skirt this issue by finding a cop-out that it thinks is so bulletproof, it never bothers to actually develop it. If only the rest of the film could hide itself behind cheap excuses the way it hides its main character. 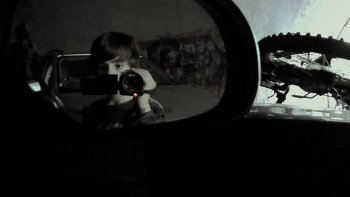 I told you, I'm not getting into the mirrors thing again.The film follows your typical upper middle class family on a camping trip to Brown Mountain in North Carolina. Mom and dad bicker over which way the GPS is taking them, big brother and big sister zone out while listening to their iPods, and younger brother Riley (Riley Polanski) videotapes the whole thing on his camcorder. One night, Riley and his siblings spot the Brown Mountain Lights, three glowing orbs that zip along the treeline. The next morning, the family comes across a tunnel filled with abandoned cars, which they investigate just long enough for dad to be abducted by aliens. The family flees to the cabin of a belligerent hillbilly named Sean (Jeff Bowser) who hides them in his basement until the aliens disappear. But you know how aliens are. One abduction is never enough.

Before we see any of this, though, we're treated to an opening crawl that explains everything we're about to see was videotaped by "an eleven year-old autistic boy." Riley's sole defining characteristic is that he has autism and uses a camcorder to engage with the world around him. Don't worry, he's not autistic in any meaningful, clinical sense of the term. He's only autistic in the "easy shorthand for why a child would videotape his every waking moment" sense.

Riley isn't really even autistic, though. You could argue that he has Asperger syndrome, but given how little we actually see or hear of him, he's way more well-adjusted than any of the idiots on The Big Bang Theory. Of course, that doesn't stop everyone in the film from pointing directly into the camera and telling each other that Riley is autistic. Once would have been enough, but the film keeps hammering this point home just in case we're an hour into the film and wondering why anyone would still be recording this. The film uses this crutch so consistently that I wonder whether Alien Abduction isn't some kind of half-baked allegory for living with autism. (It's not. It can't be. There's nowhere near enough material to support this.)

Alien Abduction also takes the concept of the Brown Mountain Lights and warps them into something wholly unwieldy. What at first appear as simple blobs of light in the night sky quickly become overbearing flood lights blasting the horn sound from Inception every five minutes. Every time an alien or a light is nearby, Riley's camera starts picking up all kinds of wonky interference. This is the film's most clever conceit by a factor of ten, which isn't saying much since it amounts to basically telegraphing a jump scare. 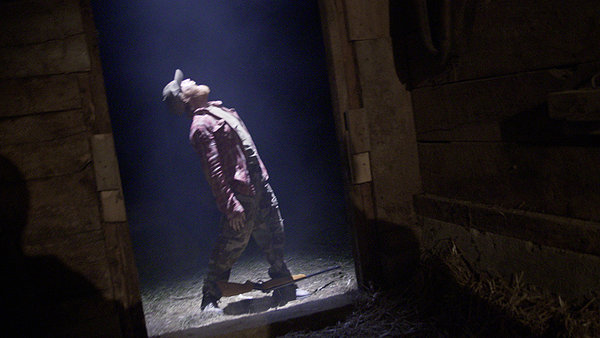 
I would subtract points from this film for having so many poorly written characters, but there aren't really any characters to speak of. Aside from Autistic Riley and Hillbilly Sean, the rest of the film's characters might as well be named Mom, Dad, Brother and Sister. They don't even have their own names; they're all named after the actors who play them. These are four people who exist purely in the moment, have no defining traits to call their own and are about as useful to the plot as the dead animals lying on the side of the road.

Alien Abduction bookends Riley's pointless excursion into the woods with interviews from local experts, just in case you wanted to question the veracity of director Matty Beckerman's movie. "There's aliens up in them hills! The government has the whole thing on lockdown! Nobody knows anything!" That last part is certainly true. The fact of the matter is that Alien Abduction completely squanders the Brown Mountain folklore in favor of an alien abduction story you've already seen six hundred times. There's no flavor to the story, no intrigue in the mystery, and no characters to give two solid shits about. You'd have a better time just going outside tonight and looking up. Yes, even if it's cloudy.

MINORITY REPORT: Having never heard of this Brown Mountain or its Lights, I can only use my imagination to give me context for this. I'm basically picturing it like Richard Dreyfuss's clay sculpture in Close Encounters of the Third Kind with some twinkling fairy lights stuck in the top. Accurate? - Ian "Professor Clumsy" Maddison