EXPECTATIONS: Could we all just quit pretending to like Jason Bateman now? For years, he's been coasting on the goodwill earned from Arrested Development, and now that they gave us a fourth season that no one actually enjoyed, can we all stop pretending that his roles could not be better played by literally anyone else? Bateman is, at best, not leading man material, who does his best work in small parts in other people's movies. Yet for nearly four years now, we've been tortured with films like Extract and Butter; movies that are just filled with nothingness. When you pick a bland, boring lead, you get a blank, uninteresting movie. Oh, and he's directing this one too? Oh goodie. More Bateman. You spoil me.

REALITY: In keeping with the "Jason Bateman should never lead" theme, Bad Words casts him as a character that could have been hilarious for a scene or two in another film. As is, we have to endure a tiring hour and forty minutes with basically one central gag: "Swearing at kids/kids swearing is always funny." Except it's not. Don't get me wrong, I think swear words are fucking hilarious. I can watch Peter Capaldi or Joe Pesci or Louis CK or even Robin Williams drop f-bombs all day, and I'm currently chairing a movement to have The Aaron Paul Award For Best Use Of The Word "Bitch" be added to the Emmy roster. But the problem is, all of these people I listed have a level of likability and charisma to them which is just lacking in Bateman. If your character is an asshole, and you don't have the charm to back it up, then you just look like an asshole in general. Especially when you're the one directing and can't see this for yourself. Then you're an asshole both on screen and off. 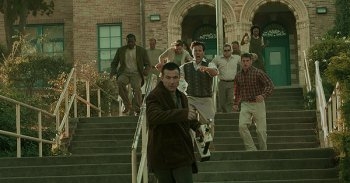 Should we file this under wacky or zany. I know it goes in the antics drawer, but I need specifics.In Bad Words, Bateman plays Guy Trilby, a 40-year old man with genius-level intellect who also didn't graduate eighth grade for some reason. With the sponsorship of online journalist Jenny (Kathryn Hahn), he uses this to exploit a loophole and enter a national spelling bee competition as a grown-ass adult, so he can settle a personal vendetta against the bee association's president (Philip Baker Hall). I'm actually giving you a little bit of a spoiler with that last bit, since the film spends so much of its runtime trying to keep Guy's motives a secret, but since it is so hard to care about any of it, I'm really doing you a favor. Along the way, Guy is forced to start a friendship with a cute little Indian kid named Chaitanya (Rohan Chand), and... hold on a second, I just realized something.

Chaitanya's whole relationship with Guy is a ruse, Chaitanya's father put him up to it, so that Chaitanya could get in his opponent's head. The father even allows Chaitanya to have a hotel room to himself, and allows his nine-year-old son to hang out with a strange grown-ass man. He has literally no way of knowing Guy's intentions, and is quite possibly setting his son up for a weekend of molestation, which is a risk he is willing to take on the off chance it helps his son win a spelling bee. This is entirely glossed over, and it's the darkest, possibly most interesting part of the film.

In fact, Bad Words could have been greatly improved if it had been more about the families and their ridiculous drive to push their children to SPELL HARDER. Like a Christopher Guest-style mockumentary where Bateman plays a side character, wandering in and out of scenes, making people uncomfortable. Or, hell, even done as an early Adam Sandler-type film, where Bateman has to spell like crazy to win the bee and then save his family's business with the winnings. Neither of these would be terribly original, but at least they would be remotely interesting. 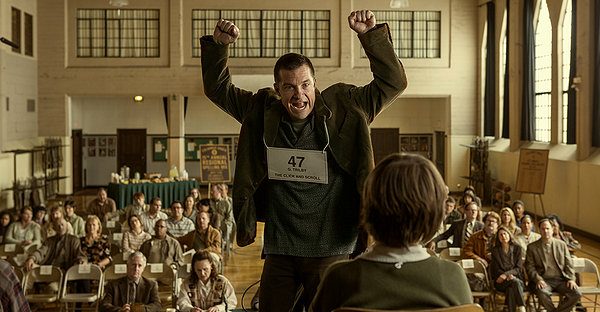 Is this a wacky/zany antic or does this go in the felonies drawer?


Instead, we're left with Jason Bateman trying oh-so-hard to leave his nice-guy persona in the dust, even though no one ever believed it in the first place. Guy is an immature character, but it's Bateman that comes across looking childish here, as his directorial debut comes from a formerly-blacklisted screenplay that just reeks of "edgy" humor. A man flips a child off once, pretty funny. A man convinces a child to say a dirty word once, kinda funny. A man does this over and over again for the entire time and then maybe he learns about himself or something? Now I'm just a high school Algebra teacher watching his students act out. I see what you're doing, kid, and I'm just too bored to be angry about it.

The film is just as ugly aesthetically as it is in tone and background. Bateman chooses to shoot the entire film in a bland, washed-out sepia, to recreate the look of a dusty school auditorium. This isn't an interesting or unique aesthetic, and the only function it serves is giving us a stark contrast when the film decides to use more traditional bright and "slick" camerawork to represent the televised bee events. This, in turn, reminds us why that's so common: It's visually pleasing. This film isn't pleasing on any other level, so why should I have expected anything different for my eyes?

Truthfully, I'm being overly-negative on this film, but that's because there's just more bad than good. What there really is, however, is a whole lot of nothing. Bad Words is worse than bad: It's boring. Bateman has managed to out-nothing himself and instead created an anti-movie, a collection of sounds and images signifying nothing. Like so many films before it, I don't really have a problem with Bad Words, it just failed so hard to lodge itself in my brain as any kind of memorable thing. In the future, suppose I watch more Jason Bateman movies, or suppose I stare at a completely empty blank screen. But I repeat myself.

MINORITY REPORT: As someone who was legitimately curious about why Jason Bateman was trying to win a spelling bee, I have to thank you for your service. "Do a thing just to see if you can" is great if you're trying to put a man on Mars, but there isn't a single person alive who isn't embarrassed by a grown man winning a spelling bee just because he can. - Joseph "Jay Dub" Wade