The Secret World of Arrietty

EXPECTATIONS: Last time we opened our doors and let the anime in, all hell broke loose. The nation of Japan, and by that we mean a bunch of dudes who wish they were in Japan, declared war on the Something Awful offices. It was anarchy. I was forced by small children to do battle with other internet movie critics in elaborate tournaments, wherein I laid the smackdown on That Guy With The Glasses. Ian was hit with a spell that turned him into a panda every time he touches water, Sean was stabbed by a gay vampire hunter (That's a hunter who is gay, not a hunter of gay vampires), and Joe was attacked by a tentacle monster voiced by Seth Green that cracked jokes the entire time it did its business with him. So you can see why we were reluctant to ever do this again.

Fortunately, there's a technicality of Internet Movie Guy Rules that insists Miyazaki/Studio Ghibli films do not count as anime. Why is that, you may ask? Well, simple. They're not anime because we actually like them.

REALITY: Whenever we get something here in America that came from another country, there are certain channels it must go through in order to be marketed to American audiences. Think of it as a giant media customs check, but only 4Kids Entertainment puts its hands up anyone's asses. Fortunately, the relationship between Disney Animation and Hayao Miazaki's Studio Ghibli has always been one based on mutual admiration and respect, to the point where anyone watching these films in America is greeted with an introduction by professional-egg-in-a-Hawaiian-shirt John Lassetter telling you how this particular film is his most favoritist one ever. He's seriously like a little kid with this stuff, and it's kinda adorable. As such, whenever Disney imports a Ghibli film, we know it will be handled with the utmost care and responsibility while still starring whatever teenager is running four different series on their cable TV channel at the moment. 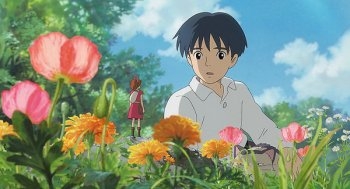 What are you even standing on?And so it is with The Secret World of Arrietty, the American English dub of Studio Ghibli film Kari-gurashi no Arietti, which is automatically inferior to the UK dub, because that one had Saoirse Ronan and Mark Strong. Adapted from the 1950's children's book series The Borrowers, Arrietty follows a family of Borrowers, a race of tiny people who survive by "borrowing" little things like sugar cubes and thimbles from big people, whom they call "Beans," as in "Human Beans." Arrietty (Bridgit Mendler) is a 14-year old Borrower who forms a bond with a young Bean named Shawn (David Henrie) after he discovers her during her first Borrowing trip. Because the Borrowers have not typically had good luck with Beans, who tend to squish and murder them, Arriety's parents (The wonderful Will Arnett and Amy Poehler) say it's time to move and find some other Borrowers. This is basically the whole movie.


Arrietty is a film on a much smaller scale than what we're used to seeing out of Studio Ghibli, and dammit, that was not supposed to be a pun. Part of this can be attributed to the fact that this is the directorial debut of animator Hiromasa Yonebayashi, but mostly it's just that this is an incredibly simple story. Heck, our antagonist (Carol Burnett? Really?) isn't even introduced until more than halfway in, and she's the weakest part of the movie. She's there because if she weren't, nothing would happen. The movie would contentedly move along at its own pace, and none of us would really mind, because it's all so pretty.

The animation here is as beautiful as we expect it to be, and large stretches of the movie involve Arrietty moving wordlessly through the artwork while the peaceful melodic soundtrack plays in the background. The artwork plays a lot with scale, and I recommend seeing Arrietty in the theaters just so you can appreciate how big it makes the world seem. You get the feeling that, as a former storyboard artist, Yonebashi would be fine with just showing us a PowerPoint of the concept art, and Miyazaki had to tell him he couldn't do that. The music, by the way, is the perfect compement to the movie. It's as lush and stimulating as the visuals, and now I get the Peter Travers Gold-Star Critics award for using the words "lush and stimulating." 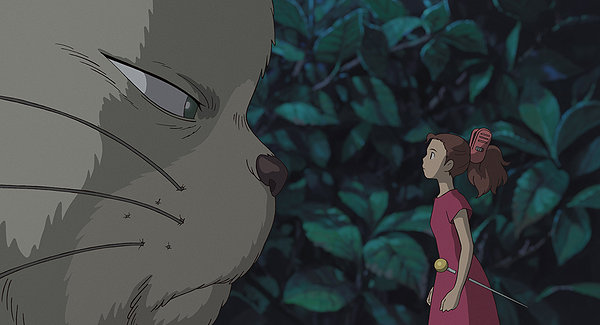 Spoiler: the cat eats her.

The film is a little weak on story, sure, but there's a lot of charm to be found here. You know how most children's programming is basically just pretty colors and happy music anyway? Well, Arrietty is like that, but actually, y'know, good. Disney and English Dub Director Gary Rydstrom seems to know this, as the voice talent is content to stay subdued so as not to overshadow the rest of the film. It's one of those films that's aimed at children but refuses to pander toward them, which I appreciate. As a film, it feels that your children can handle a brief dialogue about death coming from a major character. It also assumes your children are mature enough to sit down for 90 minutes and watch a fun little story without the need to over-explain things or have cute wisecracking sidekicks. And if your kids aren't, Studio Ghibli doesn't care.

As good as these films are, they have extremely limited appeal outside of Japan, and everyone knows it. While that's a shame, and something that should be rectified, the plus side is that Ghibli and the Disney Distribution team can do basically whatever they want without worrying about appealing to demographics. This means they can make their sweet simple little movie without corporate *coughDreamworkscough* interference. Also, they might be a tool used by Obama to brainwash your children into thinking that sharing and fairness are good things. Because Obama produces movies, you know. Just a warning.

This is a good movie. It is a fun movie. It is a movie that most of the country will never see, that television news broadcasters are trying to keep people from seeing, and it's my job to try to change that. (By the way, my favorite part of the video in the link above is when the fat guy suggests rebelling against this movie by PAYING TO GO SEE IT. Then throwing stuff on the floor and PAYING MORE MONEY for tons of Popcorn to make a mess with. Because being a dick to theater employees, that'll sure show Obama what's what.) In any case, I'm urging you folks not to underestimate your kids. Take them to see a film that actually has some quality to it, because films that put in this much effort deserve to be rewarded. Sure, there's not much content to Arrietty, but there's not much content to anything your kids like. I'm championing The Little Movie That Could (Appeal To An Incredibly Small Target Audience.)

MINORITY REPORT: The live-action Redline was such a big hit, we're branching out and adapting all sorts of anime these days. Joe and Jane Sixpack are gonna love this Arrietty stuff. Tiny people, giant cats, what's not to love? Is John Goodman available? - Rascal "Film Exec" Robbins