EXPECTATIONS: Last year, Unknown proved that an interesting premise can't sustain a whole movie. While the trailer for Gone definitely caught my interest, four factors make me cautious: It wasn't screened for critics; it's PG-13; it features an alumnus of One for the Money (Daniel Sunjata); and we're still in February.

REALITY: A hundred years from now, people may look back on Gone -- if they remember Gone at all -- and say, "Here. Here was a film so pointless, it gave us a 'heroine' who should have just stayed at home." Indeed, Gone is just a little more pointless than Ow, My Balls! 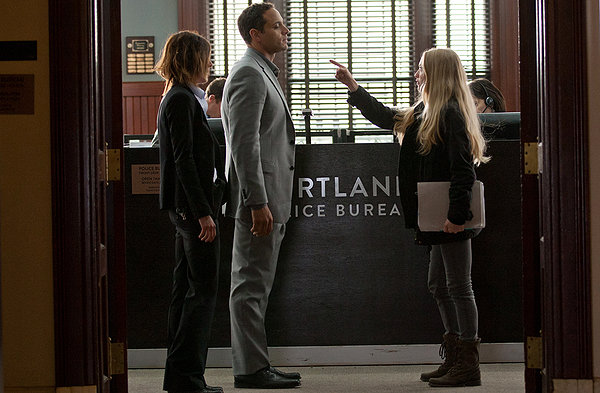 Through flashbacks, we learn that Jill (Amanda Seyfried) was kidnapped from her bed in the middle of the night, bound with duct tape and thrown into a hole à la The Silence of the Lambs, The Ring or Kiss the Girls. This hole wasn't in some killer's basement or backyard, though. This hole's in the middle of a state park, and filled with human remains. But she escaped! And, because no one goes to state parks anymore, the police were unable to find the hole or any evidence that would tie a string of missing girls to this hole. And, because police don't care to solve crimes anymore, Sgt. Powers (Sunjata) chose to focus on the sheer lack of DNA evidence and Jill's history of mental illness rather than the duct tape residue on Jill's wrists and face, any bruising she might have incurred from being thrown in a hole, the bone fragments in her hand from when she used a victim's broken fibula to stab her kidnapper -- I could shoot holes in this premise all day.

Anyway, back in the present tense, Jill's careful not to get victimized again. Her house has five locks, she takes self-defense classes, she beats the shit out of sparring partners who get too fresh, she takes antipsychotics, she keeps a gun in the laundry hamper and -- perhaps unwisely -- she works the graveyard shift at an all-night diner, while her vulnerable, college-aged sister with a history of alcoholism remains all alone in that big, drafty house. You can see where this is going: Jill returns from a shift at the diner to find her sister missing.

When she goes to the police with evidence that her sister has been kidnapped, Powers, Lt. Bozeman (Michael Paré, slumming it) and newbie dick Sgt. Hood (Wes Bentley) tell her to try again in three days and don't let the big apathetic police door hit her ass on the way out, that crazy bitch. Of course, when she starts conducting her own investigation, with a little bit of help from Mr. .38, the police realize they've set a gun-waving loon loose in the city of Portland and devote more resources to finding her than her missing sister. Oh, and I haven't even mentioned Jill's co-worker Sharon (Jennifer Carpenter, who gets second billing for what amounts to a cameo appearance). 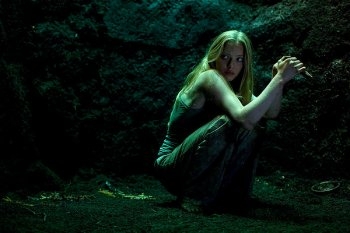 Good thing this death hole has an ambient light-source.Now, re-read those paragraphs. That's a lot of plot -- 400 words of plot, give or take. Two kidnappings, mental illness, meds, alcoholism, a younger sister, an escape. And that's just the premise, shoe-horned into the first 30 minutes of this 85-minute movie thanks to a galling amount of threadbare exposition between Powers and Hood. And that much plot makes this 85 minutes exhausting, reducing Gone to a cyclical series of scenes of Jill running, Jill making up lies because she thinks people would care more about a missing bike than her missing sister, Jill borrowing someone's car, Jill shoving the business end of a .38 in a creepy dude's face, Jill getting the next clue, rinse, repeat.

Screenwriter Allison Burnett is so in love with her own plot that she forgets to craft characters who are even remotely human, and the actors do little to bridge the gap. Seyfried, Sunjata and Carpenter aren't exactly world-class thespians, and the connotations of Bentley (who has found modest success playing intense creeps in American Beauty and P2) constantly clash with the altruistic nature of his character. The mere casting of Bentley is a red herring. Then again, so is everything else.

Most of the male characters, and possibly Sharon, are also red herrings. The plot itself is a skeleton on which Burnett can hang red herrings. A scene in which a suspect chews Juicy Fruit and triggers Jill's flashback reflex exemplifies Gone's systematic deployment of red herrings: We never see this character again and we never see the killer chewing Juicy Fruit. And when Sgt. Hood mysteriously disappears from the police station to bring soup to his sick mother (a likely story for a cop who's abducting and killing women on the side), well ... that's a red herring too. He really did leave to bring soup to his sick mother because that's more important than stopping Jill or the killer she's after.

Gone works overtime in establishing suspects -- one weirdo after another -- but we never actually meet the guy who turns out to be the killer until the final act, and there's a strong implication that Jill and the killer are one and the same, as if Burnett studied Adaptation and decided to realize Donald Kaufman's ridiculous pitch as a PG-13 thriller. In Burnett's world, no one remembers Angel Heart, so this all seems breathtakingly original, right?

MINORITY REPORT: I love how minimalist our action movie titles have become. In just two years we've gone from Salt (which was at least named after the main character), to Abduction (which never happens in the movie) to Gone (the general direction of the victim, I guess). Next year's action-thriller Action-Thriller will probably be the hit comedy of the summer. - Joseph "Jay Dub" Wade