EXPECTATIONS: All signs point to this particular Tyler Perry film featuring neither the shrieking banshee caricature of an old woman that is Perry's trademark nor anything whatsoever to do with the similarly titled Frank Capra film (or its goofy Adam Sandler remake). And of course, by 'all signs,' I mean 'that poster out in the lobby of the theater.' Good signs for Good Deeds? One can certainly hope... 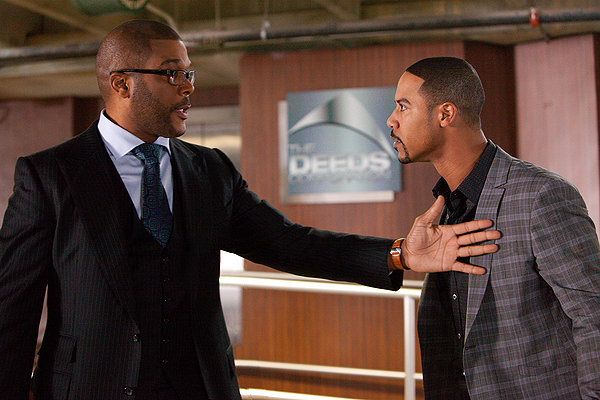 Stand aside, young man! I, Tyler Perry, have good deeds to perform!

REALITY: Good Deeds is a turgid, joyless affair with themes that never quite mesh the way they're supposed to. This film has so many problems that I'm not even sure where to begin. The characters are thinly drawn caricatures who lash out into wild hysterics whenever a scene slows down; the story moves at a snail's pace through maybe an hour's worth of plot; and the whole production seems terrified to explore any of the deeper themes that Perry meekly introduces in his opening narration.

"My life is perfect," narrates Wesley Deeds (Tyler Perry) as the film opens. Deeds is the president of a thriving corporation, the favorite son of a well-to-do family and fiancé to a beautiful San Francisco socialite (Gabrielle Union). But he's not happy. He's the only thing keeping his family and their company together, and that life clearly weighs on him tremendously. On his way to work one morning, Deeds meets Lindsey (Thandie Newton), a single mother who works as a janitor at the Deeds' company. Lindsey and her daughter have just become homeless, and are sleeping in the supply closet on the top floor. As Deeds learns about Lindsey's predicament he decides to help her out. Free dinner here, day care for her daughter there, and so on. These good deeds (oh hey, I get it!) prompt the two to begin opening up to one another, and soon an unexpected relationship blooms. 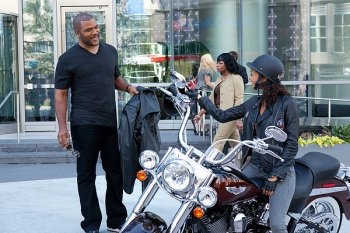 My good woman, I, Tyler Perry, require the use of your vehicle in the commencement of my good deeds.Here's where I would commend Good Deeds for not piling on the rom-com cliches. With a story like this, it would be incredibly easy to throw in narrative turns like "Deeds' family becomes suspicious" or "Deeds' fiancée finds out he's been lying" or even "Deeds has been searching for a reason to escape from this hateful, loveless situation, and now he's found it." Most romantic comedies get some kind of comedic or dramatic mileage out of at least one of those devices. As it really isn't a romantic comedy in any sense of the term, Good Deeds follows none of these paths, and instead falls prey to an entirely separate litany of dramatic cliches.

For example, every character with whom Deeds surrounds himself is an alarmingly one-dimensional type. His brother Walter (Brian White) is an aggressive failure who resents his brother for being the goody two shoes of the family. His mother (Phylicia Rashad) is the family matriarch, a quietly bitter woman keeping the family name honest in the upper-class social circles. His fiancée and her best friend (Rebecca Romijn) surely have their own lives and their own story, but only exist in this one to stand around and look good on camera. Each of these characters feel like they were torn straight out of an episode of Arrested Development and stripped of all their personality.

Deeds himself doesn't have much personality to speak of, either. When we first meet him, he's a somber, stoic businessman whose every move in life is completely predictable, and Perry plays him almost as though he were a robot. Too many scenes begin with Deeds lumbering in through a doorway, slowly engaging whoever he happens to be sharing a scene with, and end on a closeup of his face, perpetually frozen in some kind of half-hearted grin. Wesley Deeds is oddly restrained for a protagonist in any film, but it seems particularly strange coming from the man who plays the gun-toting, man-hating granny maelstrom that is Medea. Maybe this is Perry trying to stretch himself as an actor? 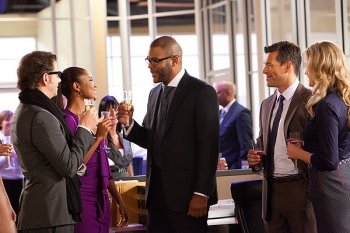 I propose a toast. To me, Tyler Perry, and all my good deeds.The only actor to emerge from this film somewhat unscathed is Thandie Newton. She can match Perry's stoic demeanor early on when her character is forced to endure the effects of poverty, but she has enough personality to carry the film through its warmer, lighter moments. Of course, the story dictates that her character is the only one who doesn't need to change emotionally. Even though the film spends more than enough time getting to know Lindsey, it's really Deeds' story, which puts Lindsey in the odd position of having a dynamic character with seemingly nothing to do.

Underneath the film's melodramatic veneer is the kernel of a unique story. Deeds' mother mentions at one point that one of his favorite things to do is to find a project and build it up to feel better about himself, the implication being that Lindsey may or may not be the first woman Deeds' has 'rehabilitated.' There could be some interesting drama wrung from that idea, but the film drops it completely the moment it's exposed.

This -- coupled with the fact that the film's full title is Tyler Perry's Good Deeds -- makes me somewhat uncomfortable. Is Wesley Deeds really the noble philanthropist he's painted to be, or is this just Tyler Perry's Wish Fulfillment Run Amok? The film doesn't want to address the notion, because it seems to know that rabbit hole leads to nothing but trouble, and I don't think that kind of boat-rocking is in Perry's nature.

MINORITY REPORT: Tyler Perry is one of those one-man brands now. Sadly, his success is in no way related to his talent, but simply to the fact that he's one of the very few people making films for a very specific target audience that everyone else seems to have deliberately forgotten about. - Ian "Professor Clumsy" Maddison