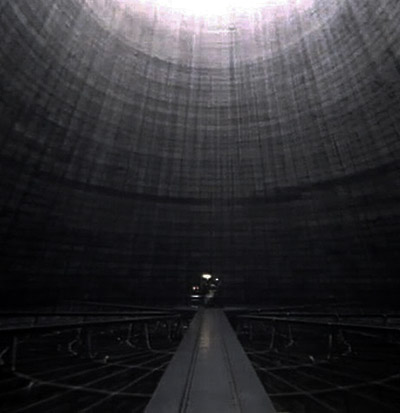 Zack: He nods and starts walking out into the chamber. His footsteps echo in the vast spherical room.

Steve: What does he see?

Zack: The Americans are dead. Some of them are holding guns and it appears they have shot themselves. Most of them, however, look horribly disfigured. It's as if they tore each other to pieces and tried to cannibalize each other.

Steve: So they Event Horizoned in there?

Zack: Suddenly, the bodies shift and a naked, blood-covered man stands up. Before Gags can react, the man presses something on the pedestal. The lights overhead immediately shut off.

Steve: Great. Gags is going to try to shoot the guy.

Zack: He fires repeatedly, missing each time. A knife stabs into his back and just misses his spine. As this is happening, the vault door rumbles and begins to swing closed.

Steve: Dang it. Gags can fight him with his gurkha knife. He has to be like a combat expert, right?

Zack: He's good with it, sure.

Steve: Meanwhile, Betty and Walt are going to try to find something to wedge into the vault door so it can't close.

Zack: Gags manages to slice up the guy he is fighting in almost total darkness. The guy is seemingly immune to pain or fear. Several mortal blows hardly slow him down and he lands vicious punches and a bite on Gags.

Steve: What about the door?

Zack: You find some sort of mechanic's kit in a heavy steel box and you wedge that into the vault door. It stops it and leaves just enough room for a person to slip in or out.

Steve: Good. Gags is going to try to finish this guy off.

Zack: Gags finally manages to drive his knife into the guy's skull, killing him. Gags is pretty seriously injured. Not mortally, but seriously. He struggles to stay on his feet as blood spills out of his wounds. He looks up as a strange pattern of flashing lights begins to appear high above.