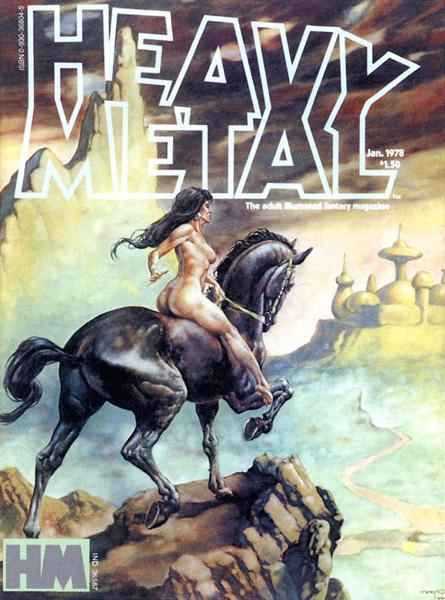 Steve: Now, don't get me wrong, there were some babes prior to this issue, but this is the first truly bodacious babe. It's the first cover where I thought, "Dang, that is a hot babe, and only Heavy Metal would have her on the cover."

Zack: It looks like Boris, but I looked it up and the artist is Val Mayerik. Better known as one half of the creative team behind Howard the Duck.

Steve: Howard the Duck was pretty Heavy Metal himself.

Zack: I never saw Mayerik's work, but I saw that fucking movie and just thinking about it makes me feel all greasy. It was somehow the sleaziest Hollywood movie I've ever seen. It was like if Donald Duck wandered drunk onto the set of Body Double, only not at all entertaining or fun like that sounds.

Zack: He produced More American Graffiti. And then fucking Mishima. George Lucas is a mystery to me.