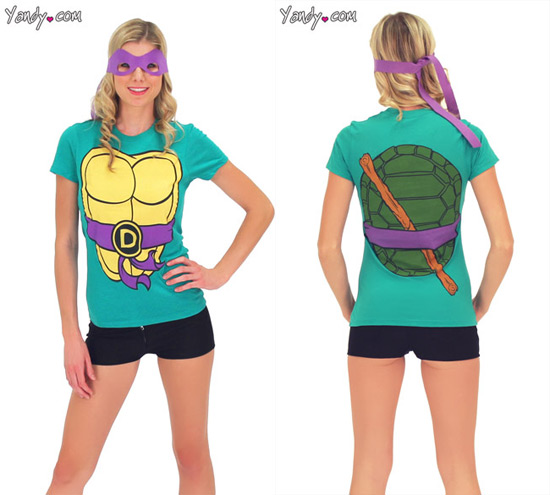 Zackula: If you can imagine Laura Dern wearing the costume for Halloween it probably should not be classified as "sexy."

Dr. Thorpenstein: And we thought the Fozzie dress was lazy-sexy. If it weren't for the suggested hot pants pairing, this could be my sexy Halloween costume.

Zackula: Those aren't even hot pants on that woman. Those are just a thing that contains where her butt isn't. Like a triple-wrapped rubber band around the dregs of a bag of frozen spinach.

Dr. Thorpenstein: I guess we can be thankful for this half-assed shit, because I don't think we really need to know what a REAL sexy Donatello costume looks like. It's probably horrifying.

Dr. Thorpenstein: Hey, be nice, you'd be hard pressed to gain weight if all you had to eat was pizza that had been in the sewer.

Zackula: I'm just saying if you're going TMNT and sexy woman there is an obvious choice of character and the costume would be super easy. You just attach a little monster face to your stomach.

Dr. Thorpenstein: Or you eat some glowing green stuff and wait for the devastating health effects to make your body grotesque.

Zackula: No, but you can get the same effect from a Monster energy drink you leave in a BPA water bottle in your hot car.

Dr. Thorpenstein: If you mix Four Loko with a Five Hour Energy, it's chemically identical to The Ooze.

Zackula: Throw in a Doritos Loco Taco and you've got yourself a sexy Bebop.

Dr. Thorpenstein: I've already got myself a sexy Bebop. His name is Zack Parsons, and I'm officially asking him to be my Halloween date.

Zackula: The honor is all mine, David, to escort you to to the corn party.

Dr. Thorpenstein: My hole will be buttered up and ready to shuck.

David Thorpe is currently writing a series of articles exploring the new book by Creed's Scott Stapp for the Village Voice. Zack Parsons has still written that weird science fiction novel he won't shut up about.