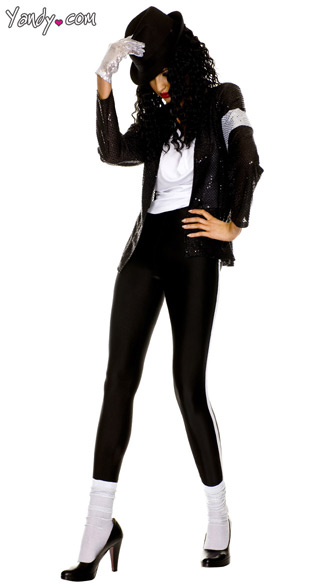 Dr. Thorpenstein: You really have to be careful how you hit on dudes in this costume because some of them may have been through some dark shit when they were younger.

Dr. Thorpenstein: Like statistically if you're wearing this thing in LA amid a crowd of thirtysomethings, like 1 in 20 of them is going to burst out crying and run out the door.

Zackula: Let's be honest here, Michael Jackson was pretty much LA's 9-11, in slow motion, with Jesus juice and roller coasters instead of terrorists and airplanes.

Dr. Thorpenstein: I really like that this is called the "Billie Jean" costume, because it kind of implies Michael Jackson got a girl who looked exactly like him pregnant, and then when she showed him the photo he's like "oh my god, that child looks exactly like me."

Dr. Thorpenstein: No, idiot, it looks like HER! You're off the hook!

Zackula: If you're Michael Jackson and this is your girlfriend that's totally fine. I mean, you're a ghost, obviously, but his track record shows his two interests were having weird children and marrying someone who looked like him.

Dr. Thorpenstein: Well, I think I speak for America when I say that I'm totally OK with whatever egregious shit Michael Jackson ever perpetrated in the bedroom, because they never proved it and those Culkin boys were undeniably succulent.

Dr. Thorpenstein: By the way, is it a little weird that Sexy Michael Jackson is somehow a way bigger stretch than Sexy Grinch?

Zackula: I don't know, but Corey Feldman would totally be into the Billie Jean costume.

Dr. Thorpenstein: You'd somehow have to get it back to him as a weird child, but the Corey Feldman Time Machine market is actually a huge part of the GDP (he has a ton of money because he has a time machine).

Zackula: So that's how he erased Corey Haim from history. I wondered why my License to Drive poster was suddenly all Feldman.