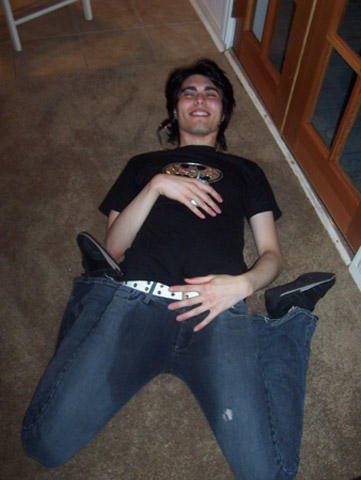 Dr. Thorpe: When you're a hip enough hipster, you can get away with almost anything. You can act like a completely arrogant asshole all the time and people will still pretend you're interesting. You can even piss your pants in public and just laugh it off, because you know nobody will judge you for it. They already judged you based on your haircut, so you're still cool.

Zack: If you're an uber-hipster everyone who sees you piss your pants will be pissing their pants too before the party is over. Luckily this guy is apparently really into anorexia, so that problem should take care of itself.

Dr. Thorpe: He probably takes a lot of laxatives to keep his weight down, so what we're seeing could actually be liquid poop. And all the girls will swoon and say "he's so skinny, he doesn't even care if he shits all over himself."

Zack: You know, guys like this really make me think about all the horrible shit I see in the world. Like I was watching some documentary about civil war in Liberia and they showed Red Cross people having to dump bodies into a mass grave. Just throwing little dead babies into this trench and then covering all of the dead faces with dirt. And I look at that, and it just breaks my fucking heart that it can't be this guy in that mass grave. It's a fucking tragedy.

Dr. Thorpe: When he eventually succumbs to the withering effects of alcoholism and irony, he won't be thrown in a ditch. He'll probably have a hundred crying hipsters at his funeral pretending they knew him really well and using their grief to get laid.