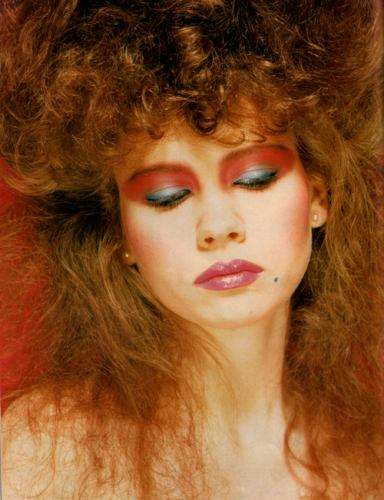 Lowtax: I feel jealous of this woman because she is able to close her eyes and not look at this photo of her... closing her eyes.

Zack: I don't feel jealous of this woman at all. She took a nap and was eaten by the hair version of the blob.

Zack: It's like that episode of "Creep Show" with the oil monster on the lake. Every part of her covered by hair in this picture is being dissolved down to a skeleton by digestive Aquanet.

Lowtax: That episode reminds me of that one Stephen King movie where the rats were in the leaky basement and then there was the King Rat because, as everybody knows, if you have a bunch of tiny things, you have to have one large thing that rules all the tiny things. Maybe there are a bunch of tiny sleepy ladies with hair explosions in my basement right now.

Zack: I remember that one time I got head lice from wearing a sombrero during a vacation. The only way to get rid of those things was to kill the three foot tall queen hiding in my scalp. The queen louse in this hair blob must be at least ten feet tall.

Lowtax: So how big was the king? Am I supposed to believe that this giant queen somehow mates with one of her tiny minions, despite the fact they can easily crawl entirely into her vagina?

Zack: I don't know, maybe the king is still wandering around on my scalp, lovelorn and searching for a giant louse he can make his wife.

Lowtax: Some day, 50 years from now, those two will meet again and rekindle their lost love while the sun sets underneath her grimy forehead.

Zack: Who knows where the hair blob will take them. For lice it's sort of like living on a surf board on a giant wave that only stops moving to devour sleepy models with too much makeup.

Zack: Actually that's not very much like a wave at all.

Lowtax: It's a wave but it only takes you to places you really, really don't want to go. It's like the New Jersey coastline.

Zack: You hop on with your surfboard and end up in a drain pipe swallowing raw sewage and trying not to be dragged to the bottom by a giant turtle that someone flushed down the toilet.

Lowtax: Her hair does resemble that crap which you always see floating on the water at a distance. You know, the stuff which obviously isn't seaweed, but is kind of a collection of charred boat pieces and the industrial waste it was carrying before exploding. All of it held together by a large oil monster.

Zack: It needs a touch of that brownish white foam that is probably churned fish semen or something equally loathsome. Man, the ocean is fucking gross.

Lowtax: And a wedding ring ensnared inside, a memory of the death and destruction such a beast causes unchecked. Perhaps from the Rat Queen.

Zack: Yeah, this thing would be loaded with wedding rings, eye glasses, and false teeth. It would look like something Nazis should be sorting for loot.

Lowtax: Like that scene from "Phantoms" when they found all that shit on the bed.

Zack: Or the "Langoliers" when all the people disappear and leave behind their wallets and glasses and stuff. Oh I hope Balki Bartokomous isn't involved in this.

Lowtax: He just wanted his dad's approval! That is why he got Cousin Larry into so many wacky situations involving hair monsters of the deep.

Zack: Back in Mypos the tide was brown with tangled hair.