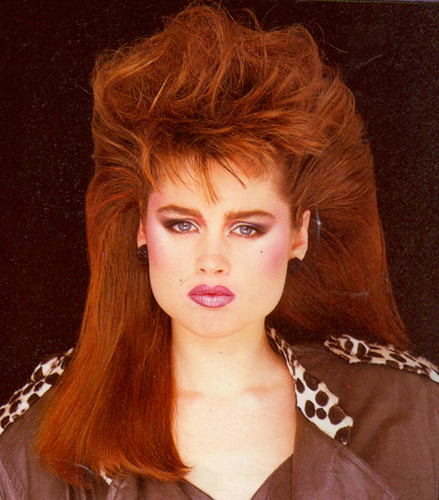 Zack: There is no way this woman isn't a gang leader in the post apocalyptic future. She may also be an android gang leader, making her twice as cruel and dangerous.

Lowtax: She was cloned from Tiffani-Amber Thiessen DNA and wed to a Yakuza boss.

Zack: Her jaw looks like a shovel and her hair no doubt contains myriad weapons of her trade. Monowires and laser katanas and whatnot.

Lowtax: Some cow appears to have been stapled randomly to her.

Zack: I think it's worse, it's a Dalmatian. She's like the Studio 54 version of Cruella DeVille.

Lowtax: That does make more sense, you never hear about cows in bleak, dystopian visions of the cyberpunk future. But then again, you don't really hear about Dalmatians either.

Zack: People have dogs though. Dogs will survive the dystopian future. Cows just aren't cool enough when you have shit to do like fight people in refineries or ride around on a motorcycle with a metal hockey mask on.

Lowtax: I keep waiting for Michael Douglas to appear behind her and demand she reveal which boss was responsible for the death of his partner, Andy Garcia.

Zack: Oh man, that movie was great. They should sell it in a two pack with that automotive factory comedy "Gung Ho" with Michael Keaton. It could be like the 1980s "Misconceptions of Japan" double pack.

Lowtax: It looks like in her haste to kill the dalmation cows, she recklessly abandoned her attempt to fashion her hair into an homage to the Statue of Liberty.

Zack: It's like a hair boat crashed into the back of her head and she didn't even notice.

Lowtax: She was too busy thinking about her communication device earrings which are also disguised as blackberries.

Lowtax: What's that white glowing thing next to her ear on the right? A tiny pickaxe?

Lowtax: It's the ghost of the Dalmatians! 101 Horrors!

Zack: They've come back to haunt her shoulder straps.

Lowtax: This is too scary, let's move to the next one.

Zack: Yeah, these ghosts cannot be busted by the likes of us.