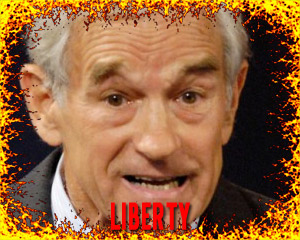 This dude has a lot going for him. He seems like he would deal with FEMA spraying docilizing spray on my yard during the summer. Full UFO disclosure so we finally know what went down in Hangar 18. He can get the wire taps taken off my phone and Internet so I can stop using only my Motorola pager from 1993 to communicate all information to my friends and loved ones. You try reading a tablature website on that thing. It's bogus.

Down sides: I'll be nodding along to everything Ron Paul says during a debate, eating my cup noodle with my feet up on my stack of unsold Youthanasia one-sheets, when he says something that makes me spit out my spicy shrimps. "We need to switch back to gold and defund the abortion factories of Planned Parenthood and eliminate zoos and stop giving school lunches to fat people." NOD NOD NOD "Then we need to bring our troops home from Germany!" PSSSSSFFFFFFF!!! Tiny shrimps all over my mixing board with all sliders pegged to the max. Is this guy bonkers? Does he want Hitler 2.0 (also the title of a b-sides album I have been working on). 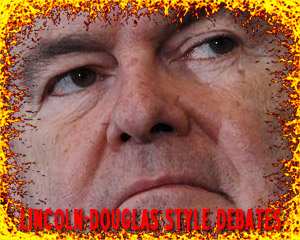 This guy is great. I could sit and listen to him all day. Actually, I have. I regularly jam his alternate history audio books while crushing reps on my Gripmasters until my hands feel like I slammed them in a door. Nobody has a clearer vision of what would happen in the civil war if Robert E. Lee wins every battle and also writes an anti-communist manifesto that becomes the basis for an alternate history version of western civilization, thus preventing both world wars and allowing America to annex Cuba as the 51st state. I would love to see him debate Obama because he would find a way to attack the moderators even though there are none in Lincoln-Douglas style debates.

Down sides: No offense dude, but if we were going with a fat guy we would go with Chris Christie. The dude's name is a double reference to Our Lord and he reps a state that would be great to win instead of Georgia. Also, Newt is wicked, and not in a cool way like throwing horns and ripping the pads off your fingertips punishing a guitar. I'm talking eating a hamburger full of cocaine sort of wicked. Which is sort of a cool way, but don't do drugs, kids. Not cool at all.

So for my endorsement, which weighs like a cosmic yoke upon my shoulders, there can be only one choice: 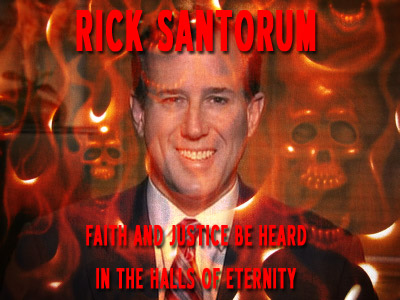 I want a President who could face down a wicked demon. And man, I don't mean a little red devil, I am talking full skull-headed, burning-bodied, riding some steam-gusting metal horse with glowing black eyes sort of demon. You want Mitt Romney in that fight? Ron Paul? You might as well throw a broom at it! Santorum is a bad ass when it comes to spiritual warfare. He is armored by faith, just like we're supposed to be. He is a god-blessing Psychotron conditioned for warfare on a soul scale. Also, I would trust him around a child. I would not trust Ron Paul with a child. Just gut instinct on that, dudes.