Me and Eduardo follow Woolsy and O'Keefe into what looks like an assemblyman's private office with all the furniture pushed to the side to make room for a smart table. Some gewgaw from corporate I'd guess. The image of the satellite map on the table depicts Lansing and the area surrounding the city with zones marked by red and yellow and green. A time lapse shows the green shrinking towards the capitol building as police cordons and barriers were overtaken by protesters and police abandoned their posts.

At the end of the playback the situation shows as a green ring around the capitol maintained by Lewis security and green at a long-derelict Oldsmobile plant along the Grand River. Every other part of the city is yellow or red. Red for hot spot, yellow for suspected trouble.

"Yes," agrees O'Keefe. "They're animals. They've done millions in damage to the building before we threw them out, now they're terrorizing the locals and threatening the assemblymen."

"They've looked up their addresses and started protesting at their houses," says Woolsy. "We had to run convoys to rescue them all so they're sleeping in their offices and eating at the capitol canteen."

"The furloughs end tomorrow," announces O'Keefe. "Governor Canton is signing a law that will retroactively outlaw their strikes, freeing him to liquidate all state employees and bring fiscal stability back to Michigan by seeking solutions in the private sector."

"Lewis will provide the solutions," I say. 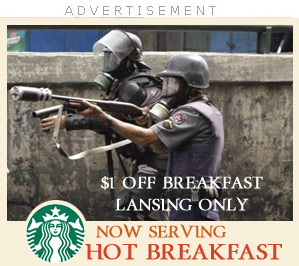 "For now," says O'Keefe. "There will be a bidding process for next year's budget. For now, we need interim staffing and Lewis is the only company with the manpower and capabilities to manage this situation."

I keep my trap shut. Michigan won't be the first state that Lewis has stunned and sectioned like veal. States like Kentucky and South Carolina just rolled over and showed their throats. Piddled like little puppies without unions to cause any fuss. Michigan is the first to really go down fighting, but they're going down same as the rest. Not my place to judge the boss men, but I ain't gonna pretend I don't see the game they're playing.

"Those people out there aren't going to take the news that they all just lost their jobs very well," I say.

"No," agrees Woolsy. "We're banking on them taking it very poorly. The staging area is going to be the Oldsmobile Plant. We've fortified it and I've got over three hundred men there, along with every riot control vehicle from here to Detroit. We mean to break the back of the protest in one triumphant show of force."

"And we push our way out of the capitol to meet up?" I say. "Slice the pie and expand the perimeter from there?"

It would be a logical form of crowd suppression. Divide the protesters into bite-sized chunks with lines of unbreakable anti-riot forces, then drive them off individually and quick-cuff the ones who you can't rout. We had a bit of training for this sort of shit working for Uncle Sam, although "hearts and minds" is military language for "shoot to kill a few less."

Woolsy and O'Keefe exchange glances as if I'd just revealed my ignorance.

"I'm sorry," I say. "I was briefed in the helicopter on the way over. Only caught about a third of what was being said. If you could fill me in it'd be appreciated."

"Mr. Sullivan, I thought we were clear enough when we spoke on the phone," O'Keefe says, which is weird because I never talked to him on the phone and my name isn't Sullivan. "Your operation tomorrow is to be false flag."

"What does that mean?" Eduardo finally decides to open his stupid mouth.

"You and your men were hired to assassinate Governor Canton," says Woolsy.

Perfect timing for Mr. Sullivan, former Lt. Col. Sullivan, to walk into the room asking just what the hell two meat-head trigger pullers are doing acting like they are running his operation. Hell if I know.