Attack of the Beast Creatures

The group of obnoxious heroes come across a bush that has berries on it, and they begin to pick them in one of the most memorable events in video history, the scene I like to refer to as "The Part Where They Pick Berries." This scene is shortly followed by guy diving into a stream and having all the flesh melted off of him, which I like to call "The Part Where The Dumbass Jumps Into the Acid River." Yeah, the river is full of acid. Nope, no explanation is given. It's just one of those trademark things that shitty movies like to do. 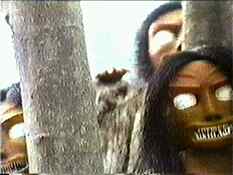 Are you scared yet?

Eventually night falls (again), and our crew decides to get some sleep. Abiding by "Crappy Ass Film Law 5.29a", they elect to put the most incompetent, ineffective, obnoxious woman on watch duty. She sits idly by while a few thousand of the Beast Creatures gather around their camp, eyes glowing like really tiny car headlights. In the 30 minutes or so in which they prepare to attack, our heroine just sits there and displays various looks of horror on her face. Well, I assume it was horror, it could have been annoyance, anger, hunger, or sadness, I really couldn't tell. The Beast Creatures eventually attack by falling from above onto the casts' heads. Even more screaming takes place, people fall down repeatedly, and the cast escapes by kind of walking away.

The audience is treated to another special sequence of "additional walking through the woods", which gets more and more exciting every time. A few Beast Creatures get thrown out of the trees at the cast, but they're able to kill them by tossing the wooden jerks back in the direction they came from. This is followed by more walking around trees, additional footage of the actors traveling through the woods, and a few scenes of the cast doing a bit of exploration across the forest. In time they find a stream (luckily it's of the "non-acid" variety) and they all jump in to wash the fake blood off their legs. However, this joyous moment comes to a screeching halt when they're suddenly jumped by a horde of Beast Creatures in one of the best scenes in film history. The entire cast gets a few dozen Beast Creatures strapped to their bodies and is jabbed offscreen with electric cattle prods so they'll jump around like dolts more effectively. After suffering minor damage, they are able to escape from the army of attackers by, once again, walking away. No wonder the Beast Creatures aren't able to get off the damn island; they're dumb as paint. 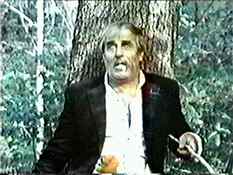 If the Beast Creatures don't finish you off, the rabies will.

One of the assholes in the cast soon goes insane and starts foaming at the mouth after he hallucinates that another cast members is a Beast Creature. He tries to choke her, runs off into the woods (seemingly forgetting about his broken leg that needed to get amputated), and falls into the acid pond. No real loss there.

The heroes then continue to walk further into the woods, and get attacked some more. After walking away, they are attacked again. Do you see a pattern here? Are you able to pick up on the theme the movie is trying to establish? You see, there's some Beast Creatures on this island, and they like attacking people. Hence the appropriate "Attack of the Beast Creatures" title. This goes on for another three or four days (I lost count after the Prozac kicked in) and eventually they all die or perhaps escape in a boat. I don't remember.

The problem with reviewing and giving a score to a movie like this is because it's real bad. But it's bad in a bad way, not bad in a good way like "Feeders". This movie, with the exception of the completely moronic looking Beast Creatures, is boring, tedious, repetitive, monotonous, and any other synonym you can think of. The cast doesn't act like any normal human beings would, it is as if they were given a script by aliens from Jupiter that took an educated guess as to how Earthlings would react. Everything about this film is subpar, even for a B-movie. It's more of a W-quality movie.