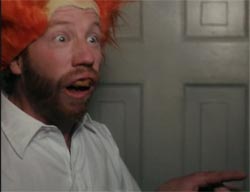 Timothy Busfield: ACTOR!Meanwhile, at the junk shop run by Jenny's mom, Big Dan is a-courtin' Maggie and trying to convince her to marry him. His methods are actually somewhat sweet, but we soon learn that his purpose is not so romantic. There is a treasure map and a family fortune that was stolen by Big Dan's evil great-grandfather and it all somehow requires that he marry Maggie.

Maggie is not quite ready to give in to Big Dan's charms, but seeing that she runs a store that never sells anything and she is constantly hounded by bill collectors, well, it won't be long!

That's not about to stop Zack and Jenny, who have secretly arranged a date for their parents. Zack cooks a delicious dinner of electrical discharges by placing stacks of food in foil containers into the microwave. Rip helps by shoving all of the furniture into the closet.

Busfield returns home still wearing his clown wig, which he announces he unwittingly super-glued to his head. He is caught by surprise when Maggie and Jenny arrive for dinner and is caught by even more surprise when a couch falls out of the closet and the kitchen explodes. Despite all of the chaos, the quartet is one wipe away from a happy date. They're sitting around the barren house eating pizza when the doorbell rings. Busfield takes this as a cue to make monstrous faces and inappropriately tickle Jenny and Maggie while snorting like a pig.

The doorbell turns out to be Big Dan and Snake and they predictably spoil the evening. Jenny and Maggie are chased off in embarrassment and Big Dan warns Busfield to stay away from his woman.

Snake plots with the Mags to take out Zack and his magical skateboard. Jenny and Zack meet up inside an empty water tower and she explains how her family used to run the town back in the wild west days. Then Dirty Dan robbed them of their fortune before being killed by the sheriff. It would seem that not much has changed around these parts other than a reversal of fortunes and the addition of a magical talking skateboard. That might seem like a big change, but it really isn't when you look at things from the broader view of human history.

Jenny is extremely unhappy to report that her mother intends to marry Big Dan.

Zack decides to find out just why the evil car dealer is after Maggie's unlucky charms. His grand plan involves sneaking with Rip onto the roof of the car dealership after hours and lowering one of a pair of walkie-talkies into the room where Big Dan and Earl just happen to be discussing their treasure map and how they can't understand what the words on it mean. With this revelation, Zack decides to escalate things to some breaking and entering.

He and Rip sneak into the dealership in search of the treasure map. They realize it is inside a safe that is being guarded by a sleeping Earl. Zack holds a stethoscope to the safe while Rip shouts wisecracks incessantly and sings for no reason. They somehow get the safe open and grab the map, but not without waking Earl. 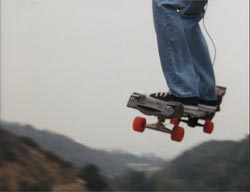 Incredible!After a positively whimsical chase involving Rip slapping Earl repeatedly on the butt, Zack and his magic skateboard flee. Earl isn't far behind on his motorcycle and by that point the sheriff and the Mags are in hot pursuit as well. The three groups are closing in on Zack and Rip at the same moment. All seems lost, when Rip unveils his latest magical power: he can fly. They zoom into the air and glide past the moon in an inept homage to ET. The Sheriff, Earl and the Mags are confused about how Zack managed to escape.

Things seem dire the next day, with a rushed wedding on the horizon between Maggie and Big Dan. Busfield is surprised and crushed to learn that the woman he met for the first time two nights before is getting married. They had such a connection over that pizza!

The wedding is underway and everything seems lost, but Zack and Rip aren't about to give up yet. Zack realizes that he has to get the treasure map to Jenny so that she has proof of Big Dan's evil scheme. He can't simply walk into the wedding and hand it to her with all of Big Dan's henchmen lurking about. Of course! He can put a scarecrow on top of his magical skateboard (that constantly makes the sound of a weed whacker) and send that into the wedding chapel and no one will notice!

Zack's plan works and Jenny gets the message. She interrupts the wedding and shows the map to her mother. Maggie, in turn, confronts Big Dan with the evidence, and then Zack shoves a cake into Big Dan's chest. The wedding is off, but now Zack has to abscond with the map once again as everyone joins the chase. One by one attackers and evil skateboarders are outwitted by Rip and his high-flying maneuvers. The sheriff manages to overact being in a car crash, one of the few things where almost any amount of emotion would be appropriate. That's real acting talent.

After several more pratfalls and some really abysmal quick cuts to a doll on a skateboard flying through the air, Zack is finally trapped by Snake. Zack is hanging from a ledge that looks like he might fall almost five feet down a modest slope and Snake won't help him until he hands over the map. Zack relents and then Snake lets him fall. Rip is crushed to pieces in the tumble.

It's then that Zack hears a voice-over from his dead mother and realizes how to read the weird text on the treasure map. It's a reflection! Luckily, he didn't actually give the real map to Snake. The words Big Dan and Earl couldn't decipher are actually "water tower". The old water tower Jenny is using as her clubhouse is the hiding spot for the lost treasure! Luckily for Zack, Rip still has some life left in him.

Back at the wedding, Busfield and Maggie realize they are madly in love with one another. It's a sickness I like to call Busfield Madness, a sickness in which you manage to love anything related to Timothy Busfied. It was previously known only in TV critics who raved about thirtysomething, yet somehow ignored the fact that one of the main characters was played by Timothy Busfield. Not to be confused with Corbin Bernsen Syndrome.

Zack returns with the treasure map, but Earl (dressed up like a gay milkman) is packing heat and is not about to let things rest. The gun misfires and Zack is thrown from Rip. The wedding crowd is stunned and rushes to see if Zack is alright. He is, of course, but Rip has been blasted to pieces small enough to make him shut the fuck up finally. Zack explains the treasure map and a series of wacky accidents cause a statue of Big Dan to topple over, smashing open the water tower and spilling gold coins all over the ground.