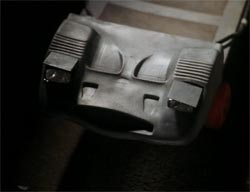 Rip is shit.Rip is left to rot in the hot sun, but crackles with potential sequel lightning. Busfield and Maggie get married, Jenny and Zack look like they might be ready to commit incest. Roll credits and some hideous teenage thrasher music.

The Skateboard Kid is one of the worst movies I have ever seen. The script is unrelentingly lazy and most of the acting performances are sub-dinner theater. A movie has to be terrible when you feel bad for Timothy Busfield. That means it has to be so bad that it eclipses 1999's The Darklings.

The greatest failure of Skateboard Kid is Rip. Choosing Dom DeLuise as the voice is not going to earn you a great deal of cachet with teenagers, but the physical realization of Rip is even worse. This magical skateboard that is supposed to be the cool and amazing focus of the movie is nothing short of pathetic looking. If it is doing anything more than rolling slowly forward it looks like it's about to break and if it is doing something more then it does not look possible. The "face" of the skateboard is about as cool as drawing a face on a paper plate.

Writer Gary Stuart Caplan and director Larry Swerdlove would continue their illustrious careers with collaboration on an unknown episode of a failed Robocop TV series. Sadly, their IMDB profiles reflect that this brief collaboration was something of a comeback for both of them.

The world will just have to wait for a Skateboard Kid III. In the mean time, if you want to see a movie that received a ten star rating from IMDB, watch Skateboard Kid II, Illicit Dreams and Subliminal Seduction and pretend they are all one movie. Or you could just watch the original Skateboard Kid four times in a row.