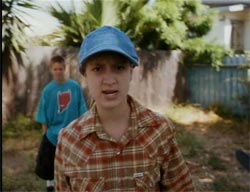 It's amazing Jenny has the energy to be angry with all that chemo.It turns out the little boy with leukemia is Jenny, our romantic lead, but Snake isn't going to give the couple a chance to get acquainted. He ignores Zack's compliments about his sweet magnesium something or other on his skateboard and warns him that the Mags control the streets and you can't join the Mags without that magnesium crap shot into it with a syringe or what have you.

Zack sees Jenny off somewhat dismissively and heads out in search of his father to beg for money to upgrade his skateboard with magnesium power. He tracks him down at Big Dan's used car lot, where his father is directing Big Dan in a hokey commercial. Big Dan complains loudly about the interruption and Timothy Busfield doesn't have time to talk to his son. Isn't that the way it always is with parents and their children? The kids just want money to upgrade their skateboard to join evil skateboarding gangs and parents just don't have the time for them what with all the paperwork back at the local TV station. No one listens to each other in these hectic 1990s familes.

Eventually, Snake shows up and gives Zack a shove, knocking him into a bunch of crap and ruining the commercial. Zack is blamed by Big Dan and Timothy Busfield screams at him in a very un-Busfieldian fashion. Big Dan's Faulknerian henchman Earl grabs Zack and throws him off the lot and then punches his skateboard in half as an afterthought.

Zack sulks on the stoop of the nearby shop full of worthless second-hand junk. The owner, Maggie, offers him a cool glass of lemonade to take the edge off. She is called back inside by an angry bill collector from the electric company. Zack hears the confrontation and decides to repay her kindness by dumping her goldfish into lemonade and using the fishbowl to conceal a little meter fraud. Maggie laughs when the confused bill collector drinks the goldfish and thanks Zack for killing her pet by giving him an antique skateboard covered with flowers.

He isn't particularly impressed with the skateboard, but an idea (and a montage) strikes when he returns home. He hurries to the garage where he glues part of a toy car to the front and bolts the engine for a weed whacker onto the back. He stencils a silver peace symbol on the bottom and paints the rest of it gray. This is all cut together with terrible Tangerine Dreamlike synth music and shots of the original Frankenstein movie, presumably because both films involve lightning and stuff happening. 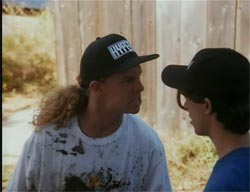 Snake will not accept non-MagsExhausted after the montage, Zack curls up on the floor of the garage with his newly minted piece of retarded-looking crap that would never work as intended in a million years. A storm is brewing in the night sky and, just in case you forgot how stupid this movie's premise was, a lightning bolt hits the skateboard

and it cries out in pain with a voice that sounds suspiciously like Dom DeLuise.

The next day Zack starts up his skateboard and tests it out. When he jumps a six-inch ramp it looks like the whole thing is going to fall apart, instead it just giggles and hoots. Zack doesn't seem to notice that his skateboard is talking, but he is surprised when it veers into the warehouse lair of the Mags and starts causing trouble. The evil teens are angered by the interloper, but suddenly the skateboard's toy headlights turn on and it rolls into action to save him.

The skateboard's name is Rip (as we soon learn) and it has a face consisting of headlights for eyes and a crude mouth. It laughs incessantly and shouts terrible one-liners like, "Here's a little oil just for you, tinkle, tinkle!" when it squirts oil on Snake's shoes. After a minute or so of awkward antics the Mags close in around Zack. Rip implores him to hop on and then shoots out a red smoke screen to cover their escape.

Back at his house, Zack comes to grips with the talking skateboard. Then they do some very modest skateboarding tricks and go to a baseball diamond where Zack lets Rip pitch him baseballs. They watch the sunrise together from a mountaintop as only a boy and his magical skateboard can.

The next day, Zack crashes the studio where his dad is filming a kid's show dressed as a clown, but old man Busfield doesn't have time for his son's nonsense talk about his magical skateboard. Zack leaves in disgust and returns home to sulk in the house. Sure, he may have a talking magical skateboard that can shoot smoke and throw baseballs, but his dad isn't paying attention to him.

When he hears music and laughter coming from the garage he heads our, ready to beat up the trespasser. He finds Jenny, the leukemia boy, in his garage dancing with Rip. Zack is mad at first, but he and Jenny bond when they both realize that they have dead parents and, conveniently, each have a live parent of the opposite sex. This sets us up for one of the creepiest double dates since Deliverance.