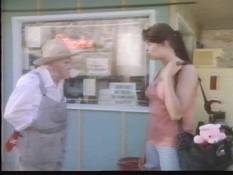 It's like "Beauty and the Beast", only without the "beauty" part.So one of the skanky women is going to visit her boyfriend. That's the plot and I'm sticking to it. The bus makes an emergency stop at the aforementioned gas station, at which point the driver leaves to take a two-second piss break. During those two seconds, White Trash Skank #1, also known as "Suzie," gets off the bus and fails to board it before it departs. Apparently nobody on the bus liked her enough to notify the bus driver or maybe they were just sick of hearing about her idiot plans regarding her hick boyfriend. Suzie learns from the 200-year old man who runs the station that the next bus isn't scheduled until Thursday, so she'll have plenty of time to get killed by whatever stupid, cheap monsters live in the next town over.

Josie (White Trash Skank #2) gets off the bus in historic Nilbog, which was of course the setting for the glorious "Troll 2." The bus driver tries to claim it's "Smallsville", but momma didn't raise no fool, Laurenti. I know Nilbog when I see it, and that's Nilbog, goddammit. Josie runs home and greets her mom and little brother, handing him a special present. "I hope you're still into plants!" Josie exclaims while her kid brother unwraps the gift to find it's a plastic Venus flytrap. Two questions instantly shot into my mind here:

1) What kind of mentally disturbed sociopathic kid is "into plants"? While most 10-year olds are outside playing tag football and throwing toilet paper on houses, does this little idiot sit around collecting leaves and staring at bark?
2) How much does he get beat up at school? My guess would be "a lot."

After the kid registers an unholy look of joy and pure bliss on his face, Josie comments "now go play with your carnivorous plant." Do you see what's happening here? Do you see how the director is carefully steering the movie? This is what's known as "foreshadowing" to the intelligent people who hang out at coffeehouses, and Laurenti works it into the story with about as much subtlety as a 20-ton Mack truck driving through a retirement home's wall. The little kid then helps the backstory advance even further by asking if Josie is going to marry Matt (her boyfriend) because they love each other so much. This teaches us that there is a character named "Matt" and Josie loves him. Judging by the pace and track record this movie was establishing, I was just waiting for one of the main characters to say, "gee, I sure hope some mutant plants don't spring to life and start strangling us and our moronic white trash pals!"

Cut back to the gas station. Suzie is waiting for somebody to stop by so she can hitch a ride into town. She decides to start petting and playing around with the old guy's dog. The cameraman shrewdly elects to show all 500 minutes of this dog-petting excitement. It became obvious to me at this point that Laurenti had moved away from his "establishing backstory" motif and advanced to his next phase of filming, "forgetting what the hell he's doing and resorting to filming random activities for ungodly amounts of time." 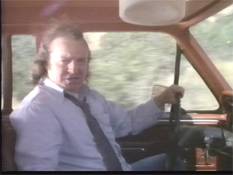 Cut back again to Josie on the White Trash Ranch. Her hick boyfriend Matt shows up wearing a green foam hat he apparently picked up from the local feed store. Matt remarks, "Last time I saw you, you were 16. We were engaged." Jesus, and I thought Nilbog was a weird town before this film. Meanwhile, in a wooded area of land that is completely unlike the current wooded area of land we were staring at, some old guys are measuring trees with equipment from the late 1800's, commenting on how the plant life seems to be dying from some mysterious cause. As if on cue, and it more than likely wasn't, the camera drops down to "two inches off the ground and moving at 20 miles an hour" mode, almost to suggest a horrible monster is coming after the three old guys with nonfunctioning tree-measuring gauges. Luckily they are able to escape by slowly walking away, so like every scene to this point, it just abruptly ends.

Having successfully recorded all surrounding 50 acres of woodland on film, the movie proceeds to take us inside a 1970's-style industrial plant. Yes, the calvacade of exciting scenery never seems to end (mainly because it NEVER FUCKING BEGINS IN THE FIRST PLACE). A bloated, doughy man is attempting to convince a tiny guy in a white shirt and tie that he discovered some "highly radioactive" plants in the woods. We're left guessing as to why the guy in a tie (along with anybody else in the movie) would even be remotely concerned about these radioactive plants, but that's the beauty of Fabrizio Laurenti's genius moviemaking skills. You can safely guess that the short guy in a tie is evil because in shitty sub-B grade movies like this, short + businessman = evil. I dare you to find one example proving me otherwise. If you can, don't bother emailing me about it, because I really don't care at this point.

The evil businessman relegates the "radioactive tree investigation" to his equally evil right-hand scientist, who was apparently hired on the sole qualification of owning a white lab coat. The boss pulls a bottle of whisky from his desk and reveals that he found it in the locker of the fleshy, ineffective, bulbous scientist. Mr. Evil concludes the Q&A session by informing Dr. Doughy that if he wants to keep his job he'd better stay quiet about the glowing plants. Apparently Nilbog has a strict anti-alcohol policy, despite the fact that drugs are the sole way to keep from going insane in such a filthy outback of civilization.

Back to the gas station. Suzie, the girl who just can't wait to see her boyfriend in Northern Bumfuck, hitches a ride with a fat pseudo-Irish guy that has a difficult time deciding which accent he wants to use for each word. Through the sheer frustration of sounding like a damaged Speak N' Spell, the confused Irish guy ends up trying to rape Suzie while chanting in an exotic Bulgarian tone, "I'm going to stick it in you." Oh yeah, he also used the pick-up line, "Do you like music? I bet you like something else, don't you?" Notice that he didn't explicitly say, "I bet you like my penis in your vagina" because Laurenti enjoys leaving certain things up to the imagination of the audience. You know, like the amount of airplane model glue fumes eating away at his tiny brain.