"A hero ventures forth from the world of common day into a region of supernatural wonder: fabulous forces are there encountered and a decisive victory is won: the hero comes back from this mysterious adventure with the power to bestow boons on his fellow man."

- Joseph Campbell, "The Hero with a Thousand Faces"

- Riddick, "The Chronicles of Riddick: Escape from Dark Athena" 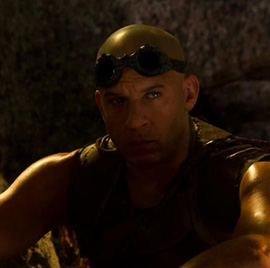 [Searching space ships sweep lights over steam-venting fissures in the industrial wasteland. A shadowy figure parkours from one junk pile to the next. He stops in darkness. Waits a beat. His eyes gleam silver.]

RIDDICK: Mutilus IV. Seen some ugly rocks in this sector, but none as ugly as Mutilus. Fourteen billion sump mutants and scum bag bounty hunters and every one of them wants a piece of me. They say that it's the most dangerous planet in the whole 'verse.

[Riddick leaps down silently behind a bounty hunter.]

[Riddick snaps the bounty hunter's neck and drags his body.]